LetŌĆÖs hear it for the blog

ThatŌĆÖs not a quote from me, but is the title of a short but proselytizing discussion with marketing guru Seth Godin author of Purple Cow and legendary management author Tom Peters.

According to Tom, ŌĆ£no single thing in the last 15 years professionally has been more important to my life than bloggingŌĆØ.

There are lots of other interesting and inspirational snippets on the Open Forum website courtesy of American Express.

Many thanks to Leon for pointing out this free resource for aspiring entrepreneurs.

Posted by Innovation and Enterprise blog editor at 11:46 PM

Many of my Business Advice clients are concerned about rivals stealing their on-line content, so I was pleasantly surprised to come across the free Copyscape service whilst researching a replacement mobile phone on the Mobile Phones UK: Reviews & Best Buys website.

All you need to do is post in your website address and see where (and how much of it) is appearing elswhere on the Web. Needless to say Copyscape offer a premium service with no monthly limit and batch searching for a fee.

Copyscape recommend you put a warning notice on your website to help scare off any potential content theives.

Defend your site with a plagiarism warning banner!

Posted by Innovation and Enterprise blog editor at 2:57 PM

A full house for Blueprints for Business

Last nightŌĆÖs Blueprints for Business: A proven route to success, the latest in our Inspiring Entrepreneurs series was a full house, including some very young aspiring entrepreneurs from BBC Dragon Peter JonesŌĆÖ new National Skills Academy for Enterprise.

As in previous events the speakers provided some fascinating and inspiring insights into starting and running a succesful business. In this case the subject was franchising, an often neglected area of business opportunity for entrepreneurs. As several of the panellists pointed out, joining a franchise is probably the lowest risk route to starting your own business, as the product or service and brand has already been established.

As Atul Pathak currently running 15 McDonaldŌĆÖs franchises put it; here was a business where the product and customers were delivered to the door for him. All he had to do was ensure he ran the restaurants efficiently and provided excellent customer service. The fact that he was required to spend nine months working in a McDonaldŌĆÖs branch covering every job, from cleaning the loos to cooking and serving burgers helped ensure he knew how to those things when it came to starting his first restaurant.

Sophie Atkinson managing director of Autosmart, the car-cleaning firm that was crowned ŌĆ£Franchise of the YearŌĆØ in 2008, was clear that the franchising route was the way to ensure stability and loyalty. Her franchisees remain committed to the business and often stay for ten or 15 years, compared to around 24 months for employees in sales roles.

Toni Mascolo OBE, the man behind Toni & Guy who starting with one salon in 1963, has built probably the worldŌĆÖs most successful high-street hairdresser brand using franchising. He doesnŌĆÖt need to advertise for franchisees since almost all his applicants come from existing staff, or in the case of Japan the children of the original franchisees. For him the key to business success and surviving four recessions is love what you do and express that in your customer service. The fact that Toni still regularly cuts customers hair is testamant to his dedication and commitment.

Update:
Cmypitch.com have also written a review of the evening on their blog, Why franchising appears more attractive to both parties in a recession.

Posted by Innovation and Enterprise blog editor at 2:07 PM

I sometimes have a cup of coffee with inventors who want to discuss their inventions. Not just about whether or not they are new, but whether there is a market for it, or how to make money from it.

A few weeks ago I sat down with Robert Willox, an actor who wanted to discuss his invention for a Physical training apparatus (since published on the 18 February). The idea is between 20 and 400 vertical columns going up and down in random or synchronised patterns, so that a number of people could be on the apparatus at the same time competing over a random multi-level course and enjoying a complete physical and mental workout. It would cover a large area ŌĆō perhaps half the size of a tennis court as a minimum.

I liked the idea, but wondered if gyms and the like would want to spend ┬Ż500,000 a time for an apparatus, especially in this recession. It would also take up a lot of space and getting the most effective use of space is vital. And what if a single column malfunctioned ŌĆō the entire apparatus would be out of action.

Robert had obviously put a lot of effort into writing the patent application, which is well written, but he has no engineering background. He has not filed for patents outside the UK. The next stage is the UK Intellectual Property Office asking if he wants a substantive examination, where they counter with arguments about why it should not be granted.

This stage costs only ┬Ż130 in the officeŌĆÖs fees, but the real cost is if a patent attorney is retained to counter the arguments. An obvious statement would be that it was not new. Many published patent applications (but not those from the USA) have a search report at the back listing relevant ŌĆ£prior artŌĆØ, with X and Y markings being the most important, as they suggest that the claims named have been anticipated or are obvious improvements, respectively.

In this case the most relevant citation appears to be a Japanese document, Game device by Hitachi Plant, published in 1990 which sounds, and looks from its main drawing, rather similar, though it does involve the columns being stable when stepped on. 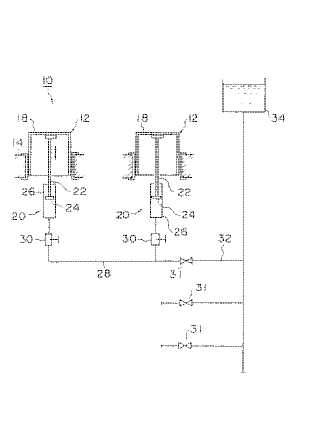 Otto Rohwedder and the greatest thing since sliced bread

The greatest thing since sliced bread

IŌĆÖm sure you will have heard this phrase before, used all to often to describe the latest gizmo or gadget. But have you come across the name Otto Rohwedder? IŌĆÖm guessing you havenŌĆÖt.

Otto, originally a jeweller, was the inventor of the worldŌĆÖs first mechanical sliced bread, which went on sale on July 7 1928,  in Chillicothe, Missouri.

After many setbacks, including a fire which destroyed his first factory as well as blueprints and prototype, he managed to develop a successful process for slicing and wrapping the bread. However sales were slow at first as suspicious consumers were slow to accept a pre-sliced bread, but soon everyone wanted sliced bread. By 1933, only five years after its introduction, American bakeries were turning out more sliced than unsliced bread.

Below are a few of his many patent application drawings. 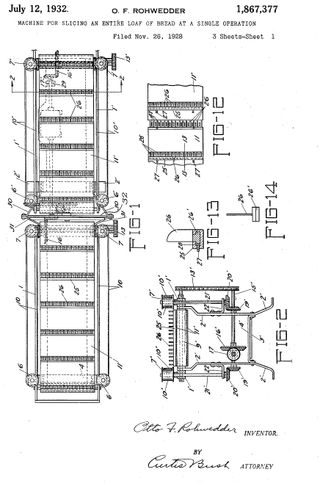 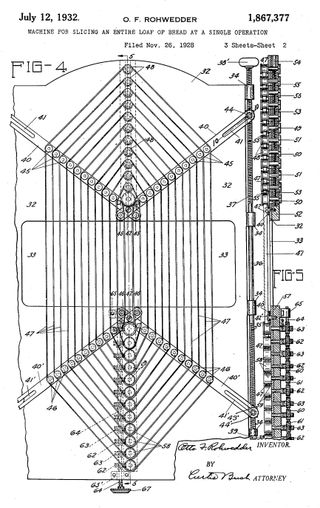 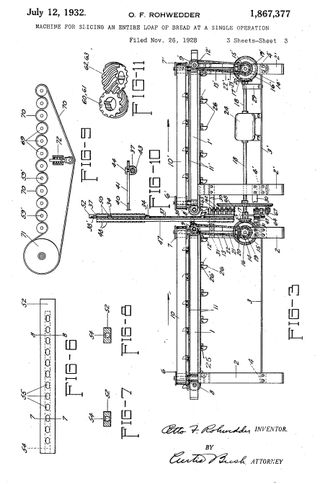 Posted by Innovation and Enterprise blog editor at 11:51 PM

Intellectual Property topics can come from all sorts of unexpected places. The headline above was the lead story facing me as I picked up my local free Metro newspaper this morning.

Firstly, I was surprised to see the social networking phenomenon making it to the forefront of ŌĆśold mediaŌĆÖ, and secondly, surprised to see Facebook backing down in the face of user complaints so quickly.

The last major U-Turn from Facebook I am aware of was in November 2007 when they removed their online tracking of purchases after more than 50,000 Facebook members signed a petition objecting to the program. Facebook Retreats on Online Tracking.

This time the response from the company has been much more swift, and this evening when I logged into Facebook I was confronted with the message below:

Terms of Use Update: Over the past few days, we have received a lot of feedback about the new terms we posted two weeks ago. Because of this response, we have decided to return to our previous Terms of Use while we resolve the issues that people have raised. For more information, visit the Facebook Blog. If you want to share your thoughts on what should be in the new terms, check out our group Facebook Bill of Rights and Responsibilities.

Bobbie Johnson in the Guardian explains the background to this latest crisis facing Facebook:

Facebook has backed down on controversial changes to its terms of service that angered users and caused protests across the social networking site.

Two weeks ago the site altered its terms of service so that it continued to retain a copy of all a userŌĆÖs messages, actions and updates ŌĆō even if they left the network. Until the change, FacebookŌĆÖs policy was to delete all traces of a user if they chose to quit the site.

After the potential scope of the new legal wording became clear, thousands of outraged Facebook users and privacy campaigners lobbied for the worldŌĆÖs largest social network to revert to its old terms of service.

On Monday it seemed these calls were falling on deaf ears after Facebook founder Mark Zuckerberg defended the changes in a blogpost, and suggested that users should trust the site with their data.

However, just 24 hours later the company decided to back down. In a message to users last night, Facebook said it would be reverting to its previous terms and conditions for the time being.

Posted by Innovation and Enterprise blog editor at 12:03 AM

I was looking for something else on the Web when I came across an account of Dean Cameron's invention for cleansing sewage and irrigation water.

It seems that 12 years ago Australian Cameron became interested in how cowpats decomposed, and how small creatures at the edges of streams broke down wastes. He wondered if nature had an answer to the simple cleaning of dirty water.

Three million dollars later, Cameron had devised a method, "Biolytix", of using worms and other organisms to break down the solid materials in waste water. This becomes a humus, which is then used as a filter to clean the water. Hence the problem becomes the solution, as my Infolink source comments.

Here is the main drawing from the Combination membrane/biqlytic filtration patent application, which was published in May 2007. 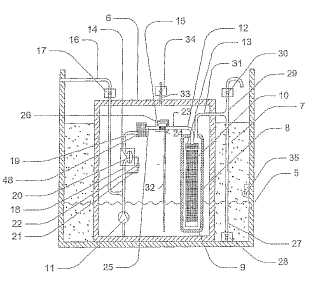 The invention has won awards, and is considered a promising contribution towards a major problem. However, my source did not quite get it right when it said "It has the worldwide patent" on the technology. That's impossible as there is no such thing. The patent application is a request for a patent in numerous countries through the Patent Cooperation Treaty, but each country or regional patent system decides individually if the application is to be accepted.

Tuesday evening in the Business & IP Centre was the launch of The Gift of Inner Success the latest book from the British LibraryŌĆÖs partner business coach, Rasheed Ogunlaru.

The fact that the event had been hastily re-scheduled from the snow hit previous Tuesday and yet was a full house, indicates just how popular the charismatic Rasheed is becoming.

As he says on his blog of the evening,  ŌĆ£The event was an evening of inspiration, celebration, connection and was attended by a rich range of spirit souls. ŌĆ£

Rasheed kindly gave a copy to the Centre, and using my recently acquired speed reading technique (of which, more in a later blog post) I managed to whistle through it on the way into work the next day.

The theme of the book is about how we need to give ourselves the mental space (a difficult challenge given the daily demands on ourselves) in order to listen to our hearts. Rasheed is a great believer in allowing yourself to trust yourself to let your heart rule your head.

Posted by Innovation and Enterprise blog editor at 11:16 PM