Britain's budget has been described as the first carbon budget, and a Telegraph article has picked up on a related development.

Ed Miliband, the Energy Secretary, is reported as being expected to approve at least one carbon capture coal-powered power station. The idea is that the carbon dioxide created by the power station will be captured (or "sequestrated") and then stored, probably underground. The concept is called CCS. The new station would be financially supported by the government to demonstrate the technology.

Energy companies say that they cannot profitably operate CCS power stations, so the article suggests a levy on consumer's power bills would be needed.

The question in my mind is, which specific technology would they use. CCS technology has grown greatly in recent years. A simple analysis suggests that while during 2001-2004 there were 61 inventions on the subject, in 2005-2008 there were 144.

My strong impression is that there is no consensus on the best method to use. So I offer as an example of CCS a recent Raytheon patent application for efficient extraction of oil and reduction in energy use. The petroleum in a reservoir is electrically heated and is run through heat exchangers while carbon dioxide is injected into the reservoir, which is then capped. Here is its main drawing. 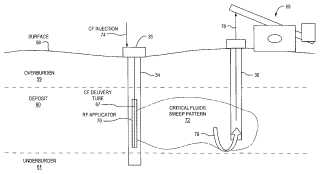