I was watching a programme about the hundred best children's movies when it was stated that Monsters, Inc., which dates from 2001, was the first animation which showed hair and fur realistically. It's the one where monsters are frightened by a little girl named Boo.

That movie was by Pixar. Out of curiosity I had a look and found that they have lots of patents for algorithms to manipulate computer-generated imagery (CGI) to produce useful and interesting effects in animation.

A relatively quick look did not show any patents before 2001, but from 2003 Pixar was filing patents for just that. Anyone interested in the technical details of how CGI works will find them a goldmine.

The first to be published was Hair rendering method and apparatus which has this as its main drawing: 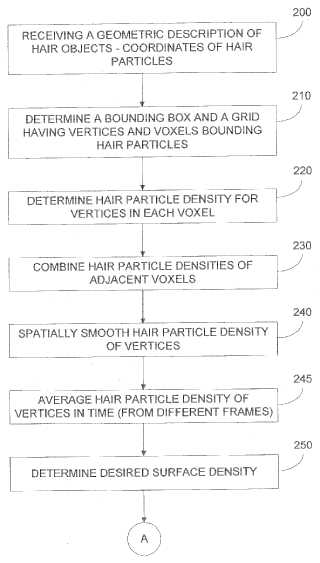 Pixar also has its later Volumetric hair rendering patent, which says "Manually animating each individual hair is typically too time-consuming to be practical. As a result, the motion of hair is often derived from a physics-based simulation. Hair simulations typically represent each hair as a set of masses and spring forces" -- such as gravity or wind. Yet that can look false, as hair does not move in a single mass. There is also the problem of appropriate lighting. The trick is to get them to move realistically in a "collective" fashion without an expensive amount of computing time.

The patent's solution was "volumetric representation [which] determines hair responses to hair to hair collisions and illumination".

The Google Advanced Patent Search database can be used to find more, such as "rendering" as a title word (where patents on creating shadows can be found, for example). Ask for Pixar as the assignee.