The problem of shoelaces

Shoelaces that keep on getting undone can be a problem. Peter Greedy is a London optometrist who claims to have solved the problem after six years of work in his garden shed.

A British patent was granted in 2006 for his Fastener arrangement for footwear and clothing. Here is the main drawing. 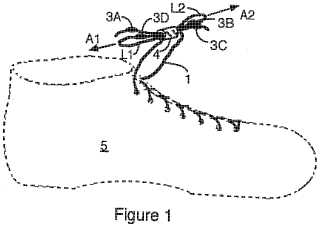 A double knot might sound simpler than a special device, but Greedy argues in the patent that children find tying knots awkward. All that is needed is a simple pulling action which tightens the lace within a short tube.

A trade mark, Greeper, has been registered in the UK by Greepers Limited. A clever play on his name and "gripper". That site talks of the mark as Greeperâ„˘ but since it has been registered they are entitled to use a Â®, which is stronger protection, as there is no need to prove in any dispute that the mark is known in the area of business and that they are suffering from the competition -- it simply goes straight to a court case.

The product was launched at a footwear trade show in Germany and already has interest from retailers. There is a story about the invention in the Telegraph which quotes Greedy as saying "protect your intellectual property". There is only a British patent and a British trade mark at present: it is too late to apply for patents in other territories, but securing foreign trade marks would help stave off competitors making the same product.