Learn the basics of copyright in less than 7 minutes

This is the enticing title of a recent email video campaign aimed at information professionals.

Given the level of confusion around copyright, and the fact that librarians and information specialists are often in the front line, I was pleased to be able to increase my awareness.

In fact even though the legal aspects cover US law and includes the their concept of Fair Dealing, it covers a very complicated topic in surprising detail in a short space of time. I like the way they include sources of content that are not covered by copyright, such as ideas, facts, data,  and publications created by the US Government.

Needless to say, given the source of the video (the Copyright Clearance Center) the information tends towards compliance and the reasons why.

Sadly, they donŌĆÖt make any reference to Creative Commons and the choice of licences available there.

Corporate workers share information every day, but what percentage get copyright permission?

Most people donŌĆÖt knowingly violate copyright law, they are simply unaware of their copyright responsibilities. To help increase awareness, CCC has created a FREE video that provides the basics of copyright in a fun and informative way.

In less than 7 minutes, Jim T. Librarian explains why copyright is important, what is and isnŌĆÖt covered
under U.S. copyright law, and why attribution isnŌĆÖt always enough.
Copyright Basics ŌĆō The Video
Thank you for your interest in CCCŌĆÖs
Copyright Basics

This Program is made available for your use by the rights licensing experts at Copyright Clearance Center. We welcome you to view the video here and/or download it for non-commercial use in your organization (terms and conditions apply).

Posted by Innovation and Enterprise blog editor at 5:29 PM

I was reading today's Metro when I came across a "Weird fact of the day" stating that Richmond, Virginia was the place which had the first canned beer (Krueger's Finest, in 1935). It also stated that local inventor Dan Cudzik had designed the first stay-on, non-detachable ring pull for cans -- apparently the town's only other "claim to fame".

This was a new one to me, and indeed Daniel Cudzik, working for Reynolds Metals, applied in 1972 for an Easy-open wall patent. Here is its main drawing. 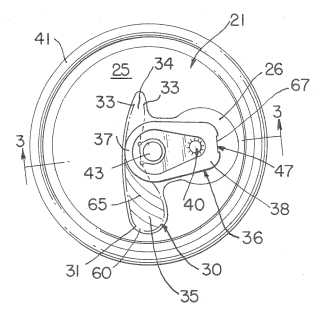 There is the familiar U-shaped design. Thank you, Metro.

What I had been familiar with was the first ring-pull itself, which dates back to 1965 with an application by a couple of Ohio inventors for a Ring-shaped tab for tear strips of containers. The story goes that Ermal Fraze was at a picnic and nobody had bought along a "church key", the tool with a pointed end that was used in the old days to pierce a can at two sides of the top. One opening was made big enough to drink from, the other was enough to relieve the pressure (otherwise beer went up your nose).

Anyway, Fraze wondered how to open his beer can. He ended up using the car bumper, with beer all over the grass. As so often, his thought was "there must be a better way". An opening device built into the can was needed.

One night not long after, goes the story, Fraze drank too much coffee and couldn't sleep. He went down to his workshop and tinkered away until he had worked out the basic principles of the detachable ring-pull. It helped that he ran a machine tools business and so knew what he was doing.

In fact one source at least claims that Fraze also patented the non detachable ring pull, in 1977, but this would be later than the Cudzik patent. It does, however, look much more like the one we nowadays normally use. The Easy-open ecology end was in fact by Omar Brown but on behalf of Ermal Fraze as the applicant. Here is its main drawing. 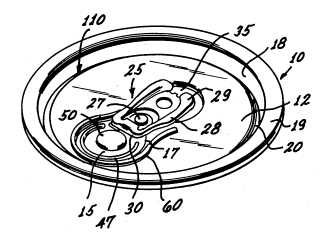 It took some time for me to identify it, but a story in the BBC about Microsoft's "Magic wand" patent application was tracked down as US 2009/121894, indeed titled Magic wand, which was published 15 May 2009.

It would have been helpful if it, and the many other news stories, had given the actual publication number. This is only an attempt to get protection, and not a granted patent, as some news stories say.

My usual Espacenet source does not yet give it as a document so I've linked to the official USPTO web site, which gives the description and claims as text, but the actual document (showing drawings) as tiffs. You have to have the right software to load it.

Magic wand is thought to be Microsoft's answer to the Nintendo Wii┬«. I'll leave it to the experts to "compare and contrast". This is a drawing from it. 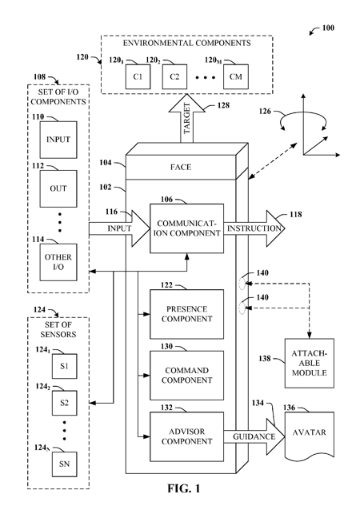 The summary provided by Microsoft certainly sounds like it can do the same as the Nintendo product, but note the final sentence:

How good is your Escalator Pitch?

I often ask my business advice clients if they have an elevator pitch. Quite a few have not heard this expression before which surprises me.

The basic idea is that in the fortunate event you find yourself in a lift with a potential backer for your business (think Richard Branson), could you convey the essentials of your idea or invention before he got out on the 20th floor?

In practice this means between 30 seconds and two minutes to express all the salient (selling) points without any waffle, which for some of my clients is a challenge to say the least.

To see examples of this in an even more demanding environment head over to Techfluff.tv to watch one of their many escalator pitches. Just be aware that practicing this on the London Underground might get you arrested.

Another inspiring place to visit for when you get a little bit longer to get your idea across (in this case 6 minutes), is Demo.com. In particular have a look at some of the Demo Gods in action to see how it should be done by the best of the best.

About DEMO
The feel you get when you enter the ballroom at DEMO is unlike any other conference. Each company is given just six minutes on the DEMO stage to truly demonstrate how their product will change the world. No PowerPoint or flashy corporate presentations allowed. Just the founders and the technologies many are staking their careers onŌĆ” it doesnŌĆÖt get any more straightforward and fast paced than that.

Posted by Innovation and Enterprise blog editor at 7:31 PM

Vote for your favourite marketing hero

As if compiling votes on the favourite brand of the last 50 years wasnŌĆÖt enough, the Marketing Society also wants to see who is your marketing hero.

There is quite a long list to choose from, but I was disappointed they only managed to find two women; Anita Roddick of The Body Shop fame, and Dianne Thompson the CEO of Camelot Group who run the UK National Lottery. I have added a few others to see who you recognise.

Posted by Innovation and Enterprise blog editor at 10:44 PM

We had an energy saving day at work today. Stalls at the staff canteen displayed literature about how to save energy, as explained by the library's power company.

One of the giveaways was a packet labelled Save-a-flush┬«, manufactured by KMA (UK) Limited. It has on it

Sometimes it pays to look at patents from different countries for the same invention. The British patent application as found on Espacenet gives the inventor as Colin John Kerwin, and he and another as the applicants (who will "work" the invention). The American patent instead gives KMA (UK) as the applicant, information that might not have been known. What is not clear is how they got the rights -- was it Kerwin's company, did he sell the rights, and so on.

So, how does the Water saving insert for W.C. cistern work ? The perforated packet, a bit bigger than a paperback, contains beads rattling around. When placed in a cistern the beads absorb water and the packet swells in size. This means less water is used when flushing occurs, as the ball float rests on the packet. Here is the main drawing. 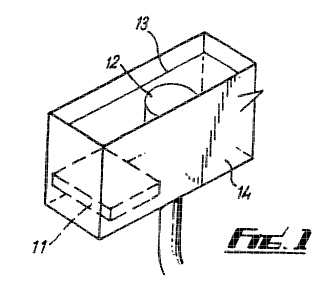 I recall seeing another product that did the same thing in a different way, Hippo the Water Saver┬«. Here the plastic envelope itself expands. They have a colourful website.

To celebrate their 50th Anniversary the Marketing Society has selected 50 brands from last 50 years, and asked visitors to vote for their favourite.

Although some of my favourites such as Apple and The Body Shop do appear on the list, they have missed some truly iconic names such as Walkers Crisps, Marmite and my personal favourite Alessi.

In true social media style the site allows comments, and I was amused to see ŌĆ£No Marmite No voteŌĆØ from Michele.

Selecting a brand for each of the past 50 years was not easy. Our shortlist was assembled using a variety of different criteria. Which brands were launched, relaunched or revamped? Who was winning awards? Who were the top spenders and the top sellers? And which brands encapsulated the zeitgeist of the year?
Pick a brand 1959 ŌĆō 2008

This is not a definitive list. ItŌĆÖs a work in progress, a platform for discussion and now we need you to get involved. Who have we missed? Where were you? Which brands shone more brightly? Share your memories and insights of the last 50 years. Your involvement will enable us to finalise the definitive 50 Golden Brands in time for our anniversary in 2009.

Posted by Innovation and Enterprise blog editor at 11:48 AM

Having spent much of my working life working in the investment world of the City of London, the various share indices were bread and butter to me. My key one was actually the FTSE All Share, but the FTSE 100 was a regular feature in my work

I was pleasantly surprised to see that the good people at World Fair Trade Day have developed their own take on the indices by introducing the FT100 for organisations that are ŌĆ£100% committed to Fair TradeŌĆØ.

You may recognize some familiar names on the list such as Oxfam, Traidcraft, and one of our recent Inspiring Entrepreneurs speakers ŌĆō People Tree.

However, the nicest surprise, was to see the only company I have ever directly bought shares in sitting in the list. I bought 1,000 shares in Caf├®direct over five years ago, and since then the company has gone from strength to strength.

Caf├®direct is the UKŌĆÖs largest Fairtrade hot drinks company. Our brands, Caf├®direct, Teadirect and Cocodirect are sold through most of the major supermarkets. We buy from 39 producer organisations in 13 countries, ensuring that over a quarter of a million growers receive a decent income from trade. We are proud to be working with farmers who have the expertise to provide the exceptional quality we require. This ensures that you enjoy the finest selection of coffees, teas and chocolate drinks. As part of our Gold Standard Fairtrade policy, over the past three years we have invested on average 60% of our profits in the businesses and communities of our grower partners.

Posted by Innovation and Enterprise blog editor at 5:01 PM