A member-owned supermarket on my doorstep 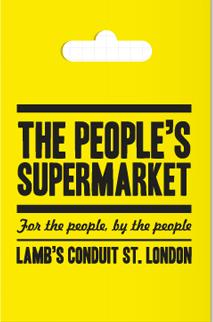 Although I had noticed a new supermarket in LambŌĆÖs Conduit Street passing by on My first ride on a ŌĆśBoris BikeŌĆÖ. I hadnŌĆÖt realised it was a revolutionary, shopper owned and supported cooperative until I saw it featured in my Springwise newsletter.

Though the first food co-op opened in the UK back in 1844, according to Google, such cooperatives have not been a familiar sight in Europe in recent years, despite a certain popularity in the United States. Until now, that is. In fact, with the recent launch of the PeopleŌĆÖs Supermarket, Londoners recently gained a new place to find affordable food.

Only members can shop at the PeopleŌĆÖs Supermarket, but they all get a 10 percent discount on prices as well as a say in how the store is run. In exchange, members pay an annual membership fee of GBP 25, and they also pledge to volunteer four hours of their time per month working as store staff. Because the supermarketŌĆÖs workforce is nearly all volunteers, staff costs are kept low this way ŌĆö an advantage that can be passed on in lower prices. Any profits that are earned, meanwhile, get put back into the store to bring down prices even further.

Food co-ops are not uncommon in the US, but itŌĆÖs interesting to see their reemergence in the UK following a bout of unusually tough times. Could this be the beginning of a widespread comebackŌĆ”?
http://www.springwise.com

The PeopleŌĆÖs Supermarket -  Identity Designed is a showcase and forum for those involved in the design of brand identities.

Time Out says:
WeŌĆÖve followed the slow and steady success of The PeopleŌĆÖs Supermarket, a carrot-packed co-operative outlet in Bloomsbury. Fighting off Tesco for a site in one of LondonŌĆÖs most independently spirited neighbourhoods, The PeopleŌĆÖs Supermarket is a project close to the heart of celeb chef Arthur Potts-Dawson and ex-Marks & Spencer executive Kate Wickes-Bull.

The duo have rallied the local community into buying into the scheme ŌĆō literally. Although anyone can shop at the store, full membership (which scores you a 10 per cent discount and a say in how the shop is run) will cost you ┬Ż25 and four hours per month working in the store. What you get is fresh, locally sourced (when possible) supermarket fare, dirt cheap and airfreight free; new jobs for locals; and all profits going back into the business. For its founders, this is the beginning of a retail revolution ŌĆō but for us, itŌĆÖs a genuine alternative to the major supermarkets aggressively taking over our streets.

Posted by Innovation and Enterprise blog editor at 2:24 PM

Some time ago I was helping Lubna Ahmad who had come into the Business & IP Centre to generate customer contact lists.

She provides hand and foot Reflexology and Indian head massage to corporate and personal clients. As a big fan of Reflexology for nearly ten years now, I was keen to help her promote her business using the web and social media.

As we talked, I could see that not only did she have a well designed and well informed website, she was also making use of Facebook, LinkedIn, Twitter and blogs.

Understanding that many potential customers wonŌĆÖt have heard of Reflexology or Indian head massage, Lubna introduces and explains their benefits:

What is Reflexology?
Reflexology is the technique of applying gentle to firm pressure to the reflexes on the hands or feet in order to bring about a state of deep relaxation, stimulate the bodyŌĆÖs own healing processes and help a person return to a state of balance and well-being.  Reflex points in the hands and feet correspond to different parts of the body and by stimulating these points reflexology opens up energy pathways and encourages the body to function efficiently and release any harmful toxins which have accumulated.

What is Indian head massage?
Indian head massage can help to relax, soothe or invigorate the recipient. It is a treatment that involves the therapist using their hands to knead, rub and squeeze the head, neck, shoulders and arms. We use Western Indian Head Massage, which is a dry treatment and does not include the use of oils.

Even more impressive was the fact that she had created the impressive website herself (no easy task for the un-initiated). She built her Reflex Space site using the popular free (six million and counting) WIX service, which uses Flash to simplify the process.

In order to remove the WIX adverts you have to pay a monthly fee.  WIX do not host your site, they provide you design tools to help you make it.

Posted by Innovation and Enterprise blog editor at 2:34 PM

Lawrence Gilbert at Company Partners has come up with his top ten most common business plan mistakes.

As someone who spends much of his time helping entrepreneurs develop their business plans, Lawrence has seen many hundreds.

Posted by Innovation and Enterprise blog editor at 11:15 AM

Looking forward to a greener New Year with my Keep Cup 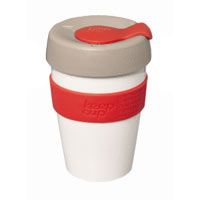 Just before the holidays our intranet announced that we could ŌĆśbuy a reusable cup and receive 10 free hot drinksŌĆÖ. This was part of the LibraryŌĆÖs commitment to Corporate Social Responsibility.

I was keen to try it out, and have been using my Keep Cup for a couple of weeks now, and am very happy with it. According to their blog, Pret have also recently trialled the Keep Cup.

The cups, available in a range of colours, cost ┬Ż6.00 but customers receive 10 free hot drinks as an incentive.  The disposable cups that the Library uses for its takeaway hot drinks have a waterproof waxed coating that means that they cannot be recycled. As part of the LibraryŌĆÖs on-going initiative to reduce waste, Peyton & Byrne have identified a product that will reduce the amount of takeaway cups used and provide staff with a better quality takeaway hot drink.

The KeepCup is a high quality reusable cup manufactured from the safest food grade plastic. It is for use with either hot or cold drinks. It has a sealable lid and sipper hole and is pleasing to drink from with the lid either on or off.

It is thermally insulated, keeping coffee hot for 30-40 minutes longer than a disposable cup. Each cup also has a thermal silicone band to ensure the cup can be carried comfortably and safely.

Posted by Innovation and Enterprise blog editor at 10:50 AM

Thanks to SpringWise, here is the perfect answer for those of you who arenŌĆÖt quite sick of shopping just yet. I have to admit I am enjoying the temporary calm between Christmas shopping and the New Year sales.

The product comparison sites such as Reevoo offer millions of reviews on thousands of products, but this is often overwhelming if you just want to know what the best product is in a particular price bracket.

Just buy this one sidesteps this information overload by taking the cumulative ratings of reviews, to offer a single recommendation for each product category.

Nine categories are featured, including laptops, TVs, toasters and vacuum cleaners, with multiple price points available for each. The site simply offers an image of the best rated product alongside a brief list of features and the best price available ŌĆö with a link to buy. If they want more information, customers can click through to Reevoo at any point to see the full range of products and reviews.

Posted by Innovation and Enterprise blog editor at 2:47 PM

I was watching the BBC news this morning when there was a brief piece about a subject new to me, the idea of making cigarettes safer when discarded on the ground by making them self-extinguishing.

Numerous fires and deaths are believed to occur because of carelessly discarded cigarettes which are still lit falling onto combustible materials. Sometimes smokers have fallen asleep in bed with cigarettes still burning.

There have been campaigns to introduce fire-safe or self-extinguishing cigarettes, where only the action of actually smoking allows the cigarette to smoulder. Otherwise the cigarette simply goes out, as not enough ventilation is given by the user to the area of ignition in the cigarette.

All the American states have now introduced laws to enforce the supply of self-extinguishing cigarettes, as have Canada and Australia. The EU is planning to introduce a new standard along the same lines.

Here is a list of some patent documents along these lines. Many terms could be used to describe the idea -- reduced ignition, flame-proof paper and so on, making it a difficult area to research. The proposed solutions no doubt vary, but a popular area is the concept of bands of reduced flammability along the cigarette's wrapper.

An example of this is the Free air burning smoking articles with reduced ignition proclivity characteristics, with its main drawing shown below. 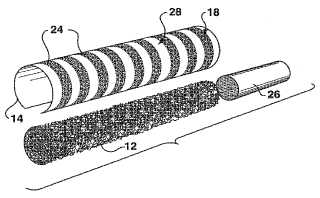 The patent document's title spells ignition as "ignitiion" which is reproduced by Espacenet, so anyone looking for that title word in the database would fail to find the document. It is, however, spelt correctly in the abstract -- a good reason for searching the more detailed abstract (summary) as well as the title, as permitted by the database.

ASH, the "action on smoking and health" pressure group, has a webpage on the subject. It includes a document which is a survey from the year 2000 of patents on the subject.

The idea of removing carbon dioxide from the atmosphere and storing it or reusing it has long been a dream. It has long been regarded as impossible to achieve relatively cheaply.

An article in the August 2010 issue of National Geographic got me interested in a new solution. Klaus Lackner, a Columbia University professor who is also working for Global Research Technologies, has devised a method which uses carbon scrubbers, each the size of a shipping container, which can deal with a ton of carbon daily. That is the same accounted for by a single passenger flying across the Atlantic.

I did a little digging and found an interesting article in The Guardian, 31 May 2008. This explained that each unit cost ┬Ż100,000, and the technology came from a breakthrough that was part luck and part hard research. The article coyly mentioned a patent application which I went on to identify as US 2008/087165.

Each unit contains absorbent plastic sheets that act as "ion exchange membranes", commonly used to purify water. It is fairly easy to attract the carbon -- the problem has been to remove it so that the membranes can be reused. A difference in humidity is the key. Humid air makes the membranes "exhale" the trapped carbon, and requires only 10% of the energy that was needed to remove carbon using electrical methods.

Lackner and co-inventor Allen Wright have these ideas published in their Method and apparatus for extracting carbon dioxide from air. They suggest that the carbon dioxide could be released into a greenhouse to promote plant growth, or used to grow algae which could be used for food, fertiliser or fuel.

The technology has apparently been further improved by WO 2010/019600. Its main drawing is shown below. 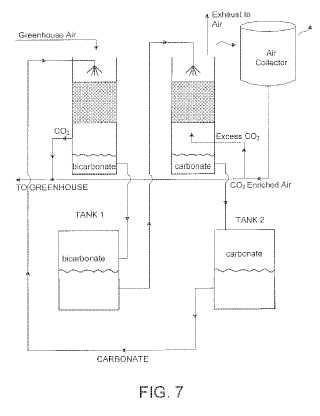 The Guardian article talks of a prototype being built at Tucson. Global Research Technologies is now Kilimanjaro Energy but the website does not (yet) mention the results of trials.

Business tips from Father Christmas: The festive entrepreneur pops into Smarta HQ for a little chat

Trust Smarta to go to the ŌĆśmain manŌĆÖ for advice at this time of year. Yes, they have tracked down Father Christmas and videoed his top four business tips.

Interesting to hear that he has adopted Sat-Nav to help Rudolf find those tricky addresses.

In summary his key points to remember are:

1. Cash flow ŌĆō lack of it is still the number one business killer.

2. Make your business and brand special so it stands out from the competition.

3. Use social media to spread the message and interact with customers.

4. Try to keep your staff motivated and happy.

Posted by Innovation and Enterprise blog editor at 12:52 PM