Last night I attended our The Power of Social Media event, and it made me think about social media patents.

Many companies involved in the area do patent their software. Terms like "social media" or "social networking" are often used about Internet sites, but relevant patents do not necessarily use those words, as different concepts are involved in constructing and providing services on such sites.

A list of the 229 "World" patent applications since 2005 that do mention those words in their titles is here. I have arranged them in classified order. Clicking on the blue EC links provides a definition of the subject matter. It can be seen that the topics covered vary widely, and also that many companies not usually associated with social networking may be given as applicants. In some cases they may have designed the software to meet a known or possible need of (potential ?) clients.

An alternative way of looking for patents is to ask for well-known companies, so that the terminology does not get in the way. A search using a priced database suggests that Microsoft and IBM are the leaders in the area, with about 17% of the published patent specifications, rather than obvious sounding companies like Facebook. Twitter, incidentally, at present has no published patent specifications in its name.

This is a list of the 48 patent applications published by Facebook since 2005 in the World system. Some patent titles are easy to figure out, such as their faintly sinister Leveraging information in a social network for inferential targeting of advertisements, with its main drawing shown below. 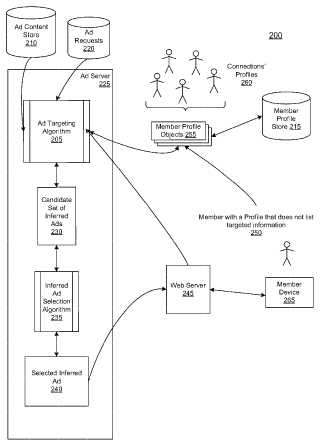 In each case the algorithm showing the technique is important, and the actual code used is not included. These patent applications may not be valid in many jurisdictions, as software patents is a complicated and disputed area. Wikipedia has an article, Software patent debate, discussing this.

I enjoyed the event, by the way. All four speakers were interesting, and I especially liked the comment by Rory Cellan-Jones, the BBC technology correspondent, that "MySpace was run by a LA social dude and Facebook by geeks", which, he thought, was why MySpace did not face up to the challenge of Facebook when it erupted on the Internet social networking scene.