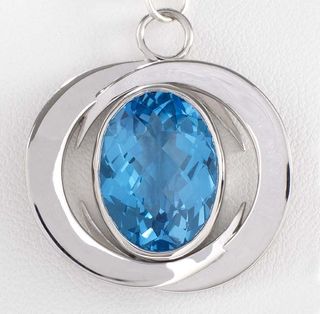 One of our creative success stories came from a chance meeting in a Philosophy class between Natasha Faith and Semhal Zemikael. Together they went on to create La Diosa jewellery and now have a shop in Hatton Garden.

They have a knack of attracting celebrity interest in their contemporary designs, with Sarah Brown (our previous Prime MinisterŌĆÖs wife) a fan, and Michelle Obama pictured wearing their jewellery during a G20 summit.

As fans of Kate Middleton (soon to be married to the son of heir of the British throne), they created a pendant called Honey-moon, specially for her. And were pleasantly surprised to receive a letter in reply to their gift, saying that Miss Middleton was ŌĆśtouchedŌĆÖ by the gift, and wanted to thank them personally.

Given the current media whirlwind in the build up to the wedding day on 29 April, this story was eagerly snapped up by the Evening Standard and resulted in a half-page story last Monday.

So congratulations to Natasha and Semhal for their brilliant designs, as well as a sparkling approach to promotion and dazzling use of the media.

Posted by Innovation and Enterprise blog editor at 4:49 PM

Pedalite┬« is a bicycle lighting invention where the act of pedalling causes LEDs to light up on the pedals themselves.

I heard about the invention from a chat with Bob Lindsey, a technical consultant with his own company, Thames Productions, who also organises the programme of speakers for the Kingston Round Table of Inventors here in London.

A few days ago Richard Hicks gave a talk to the Kingston group about the problems of getting his invention developed and commercialised. Below is the main drawing of his Electricity generation for pedalled vehicles, published through the World system back in 1999 (since patented in the UK and USA). 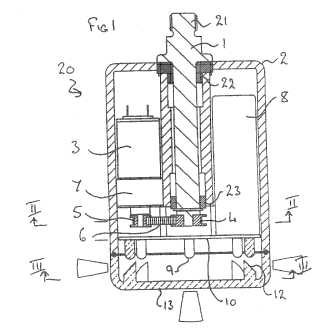 The pedal lights flash: white if seen from the front, amber from the side, red if seen from behind. They continue to flash for several minutes after pedalling has stopped (so still useful if the bicycle is held up at the lights or in traffic).

There is no battery to worry about, and the user -- possibly a young person ? -- cannot remove the lights except by swapping the pedals themselves. A film on the company's website states that 75% of road accidents involving bicycles occur at road junctions, where conventional bicycles are not lit up from the side. They also claim that the lights can be seen for half a mile.

I often have my doubts about inventions helping safety for road users as often users forget to take them or to use them, but this one is automatic. There is a Pedalite International website with more details.

Today, the 26 April, is World Intellectual Property Day. This year's theme is "Designing the future".

To mark the occasion the UK Intellectual Property Office has created a page that includes several contributions from people involved with IP. This includes an article by myself talking about what tends to take up my day.

IP is a complex and still poorly understood subject for many. Yes, it is complex, and sadly there aren't really any shortcuts in learning how it works, how it can be used to assist companies and inventors, and how it can be searched.

The World Intellectual Property Organization (WIPO), who sponsor the Day, have a press release about the day.

Rupert Sweet-Escott of Bideford, Devon has won the Ideal Inventor of the Year 2011 competition, as announced on the Ideal Home Show site. It is for an energy-generating turbine concealed within a chimney.

I posted back in February about the competition. Sweet-Escott's UK patent application was published in November 2010 as the Concealed vertical axis wind turbine. Here is its main drawing. 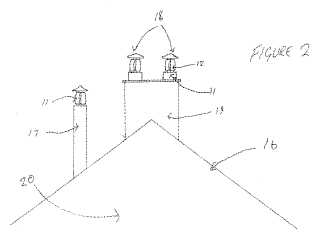 There is a Secret Energy Turbine company website. It states that the product range includes a "tiny Chimney Pot 30cm 25 watt system, suitable for lighting circuits to our 350watt 1meter Clock Tower which could run a whole house". The published patent application lists five older patent documents that are relevant. This was done by the UK IPO, so that they can later decide if they will grant protection to the invention, as it must be new and non-obvious.

I'd missed it, but Sweet-Escott appeared on Dragons' Den in 2009 with a "pedal-powered hang gliding accessory". He got backing from James Caan. There is information about it and a video clip on the Dragons' Den website.

This is a list of the five published patent applications relating to such machines by Sweet-Escott. They include the drawing given below, which is from GB2463519. 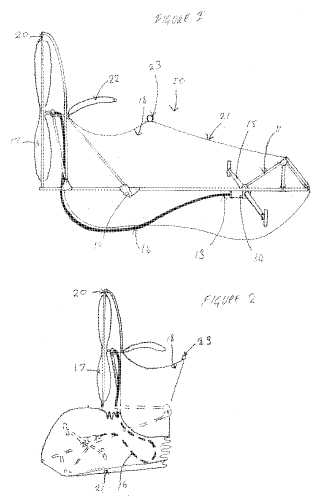 The royal wedding and trade marks

On the 15 November 2010 the wedding of Prince William and Catherine Middleton was announced.

Understandably, some companies are interested in using trade marks that involve aspects of royalty to publicise their goods and services.

The UK Trade Marks Manual, Chapter 3, by the UK Intellectual Property Office provides guidance on pages 111-117 on royalty. It lists heraldry and crowns that cannot be used as trade marks, and also lists names of the royal family that cannot be used as trade marks without consent of the Queen or the relevant person. "His Royal Highness The Prince William of Wales" is included. I am not clear if that means that the specific wording (only) is not allowed.

The IPO can use ŌĆ£absoluteŌĆØ grounds to reject applications, such as in that example, while ŌĆ£relativeŌĆØ grounds (identical or similar trade marks in the same area of business) can be used if the prior owners object.

The official UK database can be used to trace trade marks relating to the wedding. Quick off the mark, on the 17 November Brand Phoenix applied for British trade mark 2564593 for Prince William. It was for Class 33, alcoholic drinks except beers. It was marked as abandoned, so it was not registered.

On the 19 November Halewood International Brands applied for E9537051, also for Prince William. It was also for Class 33, alcoholic drinks except beers, and also for Class 32, beers and non-alcoholic drinks. I was surprised that this was registered (through the EU-wide OHIM office as a European Trade Mark, to which the UK can object), which it was in March.

ŌĆ£Royal weddingŌĆØ is also an attractive property, and also on the 19 November Halewood applied for those words in E9536913 for the same product areas. It too was registered through the EU scheme in March.

In both cases ŌĆ£seniorityŌĆØ dates were quoted. This means that the EU-wide applications had previously been registered nationally (important in disputes over priority). The Prince William mark dated back to 1991 in France, while the Royal Wedding entry quoted a seniority date from 1999 in the UK. I am guessing that the earlier registrations made it difficult or impossible for the UK to object.

I had expected more applications for such valuable properties for other areas of business.

And tomorrow we are lucky to have James Gleick speaking at the library. He is the author of  The Information, a new book which shows how information has ŌĆśbecome the modern eraŌĆÖs defining quality ŌĆō the blood, the fuel, the vital principle of our worldŌĆÖ.

The story of information begins in a time profoundly unlike our own, when every thought and utterance vanished as soon as it was born. From the invention of scripts and alphabets to the long misunderstood ŌĆ£talking drumsŌĆØ of Africa, James Gleick tells the story of information technologies that, he claims, changed the very nature of human consciousness.

He will explore where the age of information is taking us, swept along by a deluge of signs and signals, news and images, blogs and tweets.

John Naughton also interviewed him in the Observer last weekend.

Posted by Innovation and Enterprise blog editor at 12:42 PM

The re-branding of Beachy Head

The biggest surprise on my recent four day perambulation along the final section of the South Downs Way, in EnglandŌĆÖs newest National Park, came on the final day of walking.

Although the established local beer for the area is Harveys, famous for its Tom Paine Ale, and still brewed beside the river Ouse in the heart of Lewes, there is now a new rival.

It comes in the form of Beachy Head Ale, produced in a micro-brewery based in the pretty village of East Dene.

We enjoyed a delightful lunch in their brewerytap pub, the Tiger Inn, sitting in the sun on the village green looking across to Sherlock HolmesŌĆÖ retirement home.

The surprise came when reading their promotional brochure and discovering the re-branding of Beachy Head. As a relatively local inhabitant, I am well aware of the stunning beauty of Seven Sisters and Beachy Head, but also cognisant of its more well known feature. For most UK residents Beachy Head it is quite literally a jumping off point for those who want to end it all.

Now, working as I do on the Euston Road opposite Kings Cross Station, I am all too aware of the stigma that can cling to an area, even if that reputation is no longer deserved.

So I was fascinated to see how the Davies-Gilbert family, who have farmed the Beachy Head area for 200 years are attempting to re-invent and re-brand Beach Head. As you can see at Beachy Head.org.uk, it is a beautiful part of the country, with lots to see and do.

While there, I began to notice the clean and modern Beachy Head logo almost everywhere I looked. And it will be interesting to see if the media starts to pick up on this more positive story about the area. However, given their predilection for the gory and ghastly, I have my doubts.

As a geographer, I was somewhat perplexed by the brochure map of the area. I would expect it to concentrate on visitor highlights, but, the designers have decided to omit the large village of Friston. Perhaps because it is adjacent to, and somewhat overwhelms the village of East Dene which appears to be the heart of Beach Head.

Have a look a the maps of area below and see what you think. 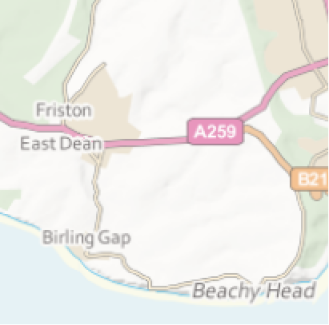 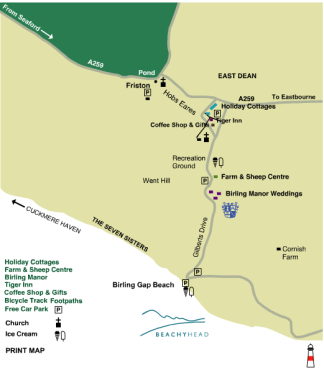 Posted by Innovation and Enterprise blog editor at 12:39 AM

Service without a smile scores 2 stars 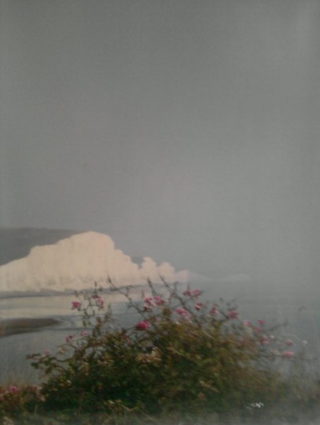 Having just returned from four days tramping along the South Downs Way along the Sussex coast, I am pleased to report that I managed to avoid thinking about work for almost the entire time.

However, two very different experiences as a customer reminded me of the importance of this aspect of business.

During our two days in the White Hart Hotel, one of the smarter hotels in Lewes, we only managed to get one smile and genuine interest of expression in us as customers.

This was in stark contrast to the The Star Alfriston, where every member of staff (even the room cleaner) was welcoming and friendly, and appeared to be genuinely concerned that our stay was a pleasant one.

So, even though the Star charged less for their rooms, our experience was at least twice as pleasurable. And of course, I will be happy to recommend this establishment to friends and family, whereas I will be suggesting they find an alternative place to stay in Lewes.

Having recently discovered Trip Advisor, I thought I would have quick look to see how the hotels ranked. The Star in Alfriston scored 4.5 stars out of five, on 56 reviews, while the White Hart scored 2 stars, on 101 reviews.

Posted by Innovation and Enterprise blog editor at 12:56 AM