Out of this world: flying car inventions

The British Library has just opened its new, exciting (and free) exhibition, Out of this world: science fiction but not as you know it.

One of its themes is Future Worlds, and asks if we are living the world that science fiction writers imagined.

One thing that many films imagined was that we wouldn't have traffic jams, as we'd all be going around in flying cars. In 1959, Einar Einarsson of New York state applied for a patent for his Flying car. It was published in 1963.

The drawings show the vehicle progressively changing from a flying machine to a car with enhanced stablizers. Propellers are at both the front and the back. At least its means of propulsion are more obvious than in Chitty Chitty Bang Bang.

1985 saw the publication of the patent for what is quite literally a flying car, which I believe I have actually seen being flown in a documentary. Dennis Butts of Arizona came up with the Air vehicle having driven wheels and ducted fans. 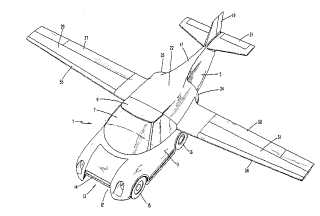 Of course, not all flying machines have to be big enough to contain a human. In 2000 appeared a patent by Georgia Tech Research Corporation, the Entomopter and method for using same. It moves about by beating its wings like an insect, and is designed for covert surveillance work. Not a car, true, but too good not to include. Here is its main drawing. Their pitch is; For any product you want to buy online, tell Flubit, and weŌĆÖll work our little socks off to get you some wonderful bespoke discountsŌĆ” for free!

And they already have 17,000 fans on facebook so are off to a great ŌĆśpre-startŌĆÖ.

It was great to hear from Bertie how useful they have found the Business & IP Centre in developing their business and protecting their brand. I look forward to them joining the growing ranks of our Success Stories.

Having become disillusioned by Groupon, after too many 75% offers for the Ultimate Facial Using Microdermabrasion, I was happy to sign up to Flubit.

And this was the fun email I received in response:

The Flubitask Force to Manlius

Welcome to our world.

Now you are officially a Flubitron (an exclusive club we must add), you are one step closer to being part of a new revolution in internet buying. Soon, whenever you want something, youŌĆÖll be able to get it cheaper, just by using Flubit ŌĆō how cool is that?! If you havenŌĆÖt already, why not follow us on Facebook or Twitter to keep up with whatŌĆÖs new?

Over the next few months weŌĆÖll be finishing off some bits and bobs, polishing the knobs and preparing to launch this Summer. Hurrah!

So what happens now?

In 2 ŌĆō 3 weeks youŌĆÖll receive your official Flubitron membership card (Flubicard ŌĆō donŌĆÖt worry youŌĆÖll get used to the terms). With this card youŌĆÖll have access to a whole range of offline and online benefits. WeŌĆÖll let you know more about this with our introductory letter, or you can have a read here:

OK, so now weŌĆÖre going to go and tell our Flubitask Force to start making your membership card, and weŌĆÖll be in touch in a week or so to let you know how theyŌĆÖre getting on!

Posted by Innovation and Enterprise blog editor at 10:51 AM

The James Dyson Award Foundation is looking for entries for its 2011 awards.

The competition is open to design or engineering university students (or the same within four years of graduation) in any of 18 countries. The brief is, "Design something that solves a problem." The International Prize wins ┬Ż10,000 and the same amount goes to the university, and there are national winners as well.

The closing date is the 2nd August. There are already many (anonymous) entries which can be viewed on the projects page. They are interesting to read, as they often describe the nature of the problem before giving a solution. There is great variety, such as vacuum bins for portafilter coffee machines, redesigned shopping trolleys, and collapsible headgear for cyclists or motorcyclists.

They can be searched for by country. At present there are 28 entries from Australia, and just one from the UK. The USA has none so far.

This is the final posting in a brief series following the opening of the Innovation Centre in London, about which I recently posted.

One of the stalls at the fair was for SAS Innovations of Bexhill, Sussex. They had several products, including A fluid leak prevention arrangement in a mains pipe, which is illustrated below. 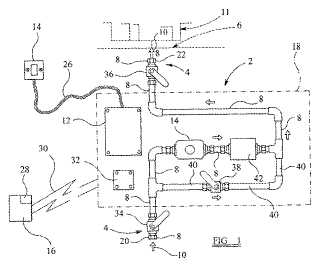 The company call it S.A.F.S., the Super Anti-Flood Saver. If the water is left running more than 6 minutes the mains supply is automatically cut off. A by-pass valve is available, which can be used for baths etc.

There was also granted British patent 2439044, illustrated below. 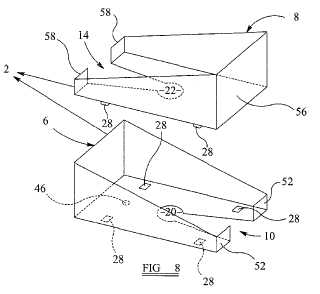 The idea is that they slot together round the neck so that someone whose hair is being washed by another does not get other parts of their body wet.

Other products are explained on their website. As with all the people I talked to on the afternoon the company was enthusiastic about their products, and it was both interesting and stimulating to have the chance to talk to many people in a visit that lasted several hours.

The Apprentice Series 7 ŌĆō the rise of the entrepreneurs 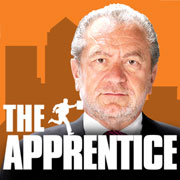 My relationship with The Apprentice series has been something of a roller-coaster ride since it started in 2005.

I have to admit that I didnŌĆÖt get to see any of the first series, and regret not having watched the wonderful Tim Campbell succeed without comprising his values. I say wonderful, because he went on from winning the first series to become a friend and supporter of the Business & IP Centre in our early days. And I was fortunate enough to get to know him during this period. He has since gone on to found the Bright Ideas Trust, to help young people turn an idea into a business.

I did avidly watch the second, third and fourth series (the ŌĆśHeadless chickensŌĆÖ shopping trip to Marrakech being my favourite episode. However, I became increasing disenchanted with both the egotistical nature of the candidates, and the appalling behaviour on display each week. From backstabbing their fellow ŌĆśteamŌĆÖ members, to outright lying in front of Allan Sugar.

However, with this seventh series the producers have decided to ŌĆśrefreshŌĆÖ the show with a new angle. Instead of the winner spending a year working with Lord Sugar, something neither party would relish I suspect, they get ┬Ż250,000 to start a new business on his behalf.

So instead of a group of somewhat dysfunctional, insanely ambitious corporate wannabes, we have a group of insanely confident aspiring entrepreneurs and an inventor.

This brings the show into my bailiwick, as our main activity in the Business & IP Centre is to help entrepreneurs and inventors achieve business success.

Already, during the first three episodes, I have spotted ways in which we could have helped the contestants avoid disaster. So, I have decided to cover each show, and identify where our information or services could have made a difference.

During the first episode we were introduced to the contestants using a set of pithy sound-bites. And already I spotted Helen Milligan who desperately needs to attend our workshop Your Life, your Business, with our amazing business coach Rasheed Ogunlaru. Why? Because anyone who says ŌĆ£my social life, my personal life donŌĆÖt mean anything to me. I live to work, thatŌĆÖs all I doŌĆØ, Episode 1 (50 seconds in), really needs to get some perspective on their life.

In the second show, we saw the two rival teams, Venture and Logic, develop mobile phone Apps. In this case a couple of hours researching our eMarketer database would have given them plenty of information about the hot trends in this rapidly developing market. Instead their decisions were made in a vacuum and based on their own ideas of what might be popular.

The third episode was all about buying a set of items for the recently refurbished Savoy Hotel, finding the best quality at the best price. As is so often the case with The Apprentice, the producers ensured the contestants were under pressure by giving them one day and just a set of Yellow Pages. Surely I wasnŌĆÖt the only one to be saying, ŌĆśwhere is their laptop?ŌĆÖ With the help of Wikipedia they could have discovered what a ŌĆśclocheŌĆÖ was and where to buy one . They could have used Google Maps to ensure the most efficient route around the required shops, avoiding schlepping from North to South London and missing the deadline. Or perhaps finding their nearest cash and carry branch.

With access to our Kompass database they would have been able to source and locate the producers of just about any product, and start finding out prices, to give them an edge when negotiating with suppliers. 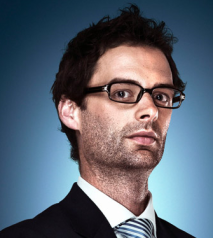 Although Alan Sugar has already ŌĆśfiredŌĆÖ three of the contestants it is difficult to tell who is going to make it through to the final at this point. However, I really like Tom Pellereau, the lone inventor in the group. His refreshing honesty and lack of political chicanery, may be his undoing in the Board Room, but I sincerely hope not. Perhaps I am to naive in thinking that, just like in Series 1, the good-guy might win.

Posted by Innovation and Enterprise blog editor at 12:29 PM

Our photos of Mayor of London Boris JohnsonŌĆÖs visit to the Business & IP Centre (Boris boots up Business Bootcamps at the British Library) are back from the developers.

Here are my favourites from the morning: 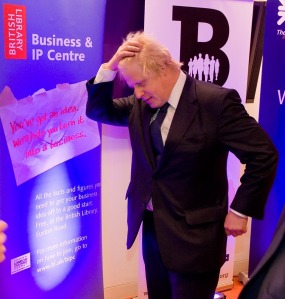 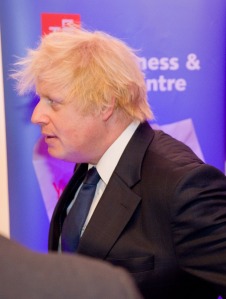 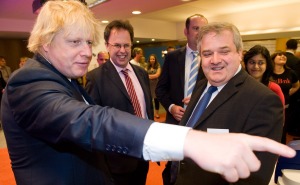 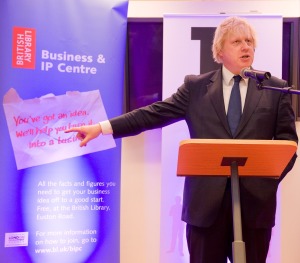 Posted by Innovation and Enterprise blog editor at 11:32 AM

I have created a PDF of illustrations with brief comments called Patented sports equipment for the disabled athlete.

It is a contribution to the Sport and society: the Summer Olympics and Paralympics through the lens of social science site, a British Library-led initiative to celebrate and study the meaning of the Olympics in the runup to the 2012 Games at London.

It was fun sourcing the material. Some relate to adaptations of existing sports; some are totally new sports; while others are exercise equipment designed with disabled individuals in mind.

Here is just one of the illustrations from the PDF. 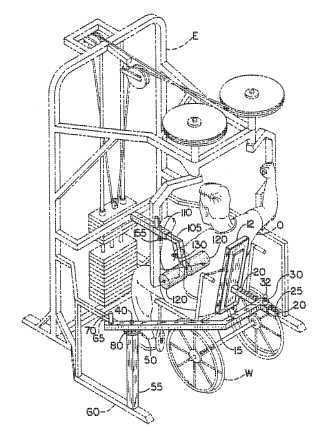 Toast Ease┬«, an invention for toasting sandwiches which have been in the freezer without having to wait for them to defrost, is another of the inventions I saw at the recent opening of the Round Table of Inventors' Invention Centre in south London, which I recently posted about.

They take about five minutes to cook and the toast not get soggy as would normally happen. The toasting can be in a variety of media -- sandwich toaster, a George Foreman grill, and so on.

Jeff Parker, the inventor, explained its benefits to me as I ate the delicious results. He filed for a European patent in 1994, which is still in force in the UK, the Sandwich-like frozen food product. I'm not clear what is different about the way it is prepared, to be honest.

Mr Parker sells a variety of sandwiches made by his method. There is no website for the product, but anyone interested in contacting this Basingstoke inventor can use the e-mail given on the fact sheet I took away -- parker-j2@xxsky.com [that link won't work, remove the xx to make it a usable e-mail address].