Many see the QR (Quick Response) Codes on advertisements and so on but few realise that the concept was patented.

Nippon Denso and Toyoda Chuo Kenkyusho KK of Japan applied for patents in 1994 for an "Optically readable two-dimensional code and method and apparatus using the same", with the US patent published in 1998. It was originally thought of as a method of easily tracking vehicles in a car factory. Its use nowadays is typically someone using an advanced mobile or cell phone's camera to "read" the code which then links to a website. Below is the main drawing. 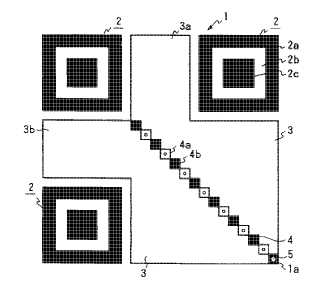 The blocks at three corners are for positioning so that the right area is read. Three squares presumably are more stable than placing squares at opposite corners, while four would take up too much space (I am guessing here). The rest of the area is taken up in practice with a mosaic of tiny pixels forming a unique image.

At present an app has to be loaded to use it, but as the concept has become so popular in recent years that it is likely that new phones will incorporate the software as standard.

That American patent at present has 144 citations, where US patent examiners cited the patent as relevant to later granted patents.

There is a useful Wikipedia article on QR codes. 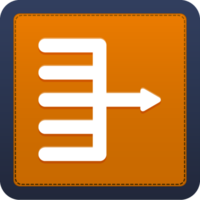 I couldn‚Äôt see how my colleagues could top the speakers at our first Digital Library Conversations @British Library. Internet pioneers Vint Cerf (known as one of the fathers of the internet) and Ted Nelson who founded Project Xanadu, the first hypertext project in 1960. There is a video of the meeting if you are interested.

However, I was wrong. As a result of Stella Wisdom (one of our Digital Curators) reading an article in the Metro newspaper, we were privileged to hear from 16-year-old ‚Äòinternet genius‚Äô Nick D‚ÄôAloisio, the founder of Summly.

This iPhone app has made international headlines and attracted backing of an investment company controlled by Hong Kong billionaire Li Ka-shing..

Summly is an iPhone app which summarises and simplifies the content of web pages and search results. Currently it can condense reference pages, news articles and reviews but according to Nick,  has the potential to go a lot further. 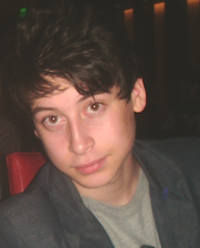 Nick has been profiled in Forbes, Wall Street Journal, Wired and FastCompany for his entrepreneurial success and interest in Artificial Intelligence. Before founding Summly, Nick created Facemood, a service which used sentiment analysis to determine the mood of Facebook users, and SongStumblr, a geosocial music discovery service.

Did I mention he was 16 years old?

According to an interview with the BBC, Summly came from his frustration in researching for his exams.

‚ÄúI was revising for a history exam and using Google, clicking in and out of search results, and it seemed quite inefficient. If I found myself on a site that was interesting I was reading it and that was wasting time,‚Äù he said.

‚ÄúI thought that what I needed was a way of simplifying and summarising these web searches. Google has Instant Preview but that is just an image of the page. What I wanted was a content preview,‚Äù he says.

What impressed me most from our meeting with Nick at the British Library (which you can get a glimpse of here thanks to Reuters), was his intelligence and modesty.

I‚Äôm sure he has had plenty of practice, but his ‚Äòelevator pitch‚Äô  (which is something of an obsession with me), was superb.

And when I asked him if he was planning to pursue an entrepreneurial path or go on to university, he talked enthusiastically about studying philosophy after his A levels. This is from someone just back from a series of meetings with high powered investors and entrepreneurs in Silicon Valley.

I came away with the impression that he was quite possibly the most confident and mature person in the meeting.

The video of this event has now been posted onto YouTube, and the interview with Nick starts 34 minutes in.

Posted by Innovation and Enterprise blog editor at 12:16 PM

The Key Trends for 2012 from Cate Trotter ‚Äì Insider Trends

I have been covering sessions from  founder and Head of Trends at Insider Trends Cate Trotter for a while now: Insider Trends ‚Äì The Future of Online Marketing, The growing grey market in the UK and How to become a cutting-edge retailer.

As previously, Cate showed an impressive grasp of the trends that new and existing businesses need to know about, to keep ahead of the competitive curve.

Tonight‚Äôs topic proved even more popular than before, requiring a move to a larger room, and an overflow event last-night.

Here are my notes from the event:

Cate started the evening by identifying three headline trends for 2012 of Doom and Gloom, Ubiquitous Digital and Humanness.

Doom and Gloom (aka ‚Äì the economic recession is killing business opportunities ‚Äì or is it?) 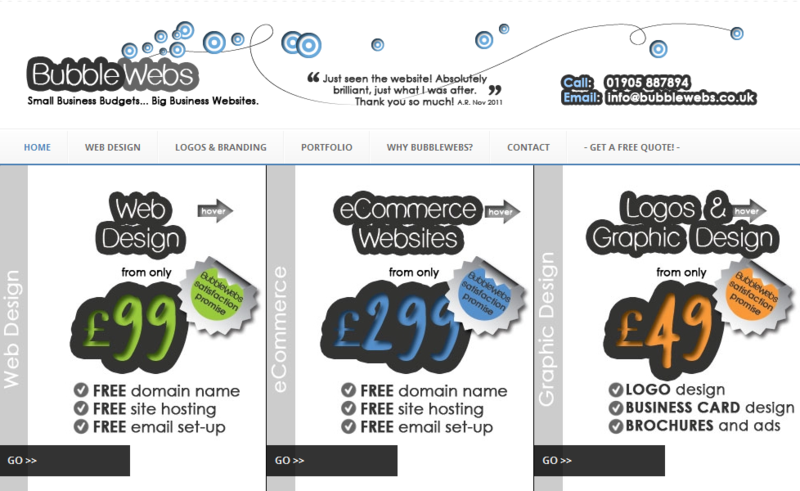 Humanness (the importance of trust in a digital commercial world)

2012 is all about being connected ‚Äì individuals, networks and businesses
Use customer value to cut through the ubiquitous social media noise. Connections through honest communication is key.

Cate ended her talk by encouraging us to go away and start experimenting with some of the ideas covered. We now had 11 months lead on our competitors.

She really wants to hear from us how we a get on, so please get in touch at cate@insider-trends.com

Posted by Innovation and Enterprise blog editor at 1:46 AM

I finally got around to seeing the Hidden Heroes exhibition at the Science Museum, London. It closes on the 5 June.

The exhibition tells the stories behind 44 common objects which are taken for granted. All, or nearly all, were patented. It uses a combination of patent drawings, variations on the objects, video and so on to do this.

I found myself peering intently at patent drawings to see if I could read the patent numbers, as this would be a great way for designers and inventors to follow up the stories. We are told about things such as telescopic umbrellas, teabags, bubble wrap, ring pulls and shipping containers. Certainly, everything has to be designed and then made, no matter how apparently simple or throwaway it is. There is a certain Germanic emphasis which reflects its origins in the Vitra Design Museum -- a useful corrective to Anglo-American boosting, perhaps.

I suspect that the exhibition would appeal more to designers and others involved in the innovation process than to the ordinary person as they may find it hard going. I certainly found it stimulating and left with a sheet covered with scribbled notes.

The inventions are listed on the Vitra Design Museum's (rather awkward to use) "My Hidden Heroes" website.

Last year we had a great Web in Feb month (The Power of Social Media ‚Äì an Inspiring Entrepreneurs evening and What is the Business & IP Centre doing with social media?)

And we are anticipating another excellent month of events for 2012 to help you reach and grow your online audience.

Join us this February for our special workshops and events in the Business & IP Centre. Regardless of what stage of business, this will be your chance to interact with experts, entrepreneurs and potential clients.

During Web in Feb you can learn how to:

Here is a summary what‚Äôs going on this February:

My colleague Fran Taylor recently interviewed Jes√∫s Montero, a freelance film maker on how the British Library has helped his work.

I am a freelance film maker and have used the British Library consistently over the last few years. I have worked for the BBC, Channel 4, National Geographic, Discovery Channel, The Learning Channel and Animal Planet. The collections I have consulted at the Library vary hugely according to the content of the programme I am researching; anything from ancient Egypt to Meerkats. At present, I am working on a part-time basis for National Geographic on a very popular show called Air Crash Investigation.

One project I worked on for National Geographic was Seconds from disaster: Inferno at Guadalajara. One of the books I consulted at the British Library to make this documentary was a compelling account of some of the people who survived this terrible human disaster in Mexico. Once I finished my research, I packed my bags and travelled to Mexico, in search of one particular survivor depicted in this book: a Mexican woman with an incredible story to tell. Eventually, I did find her and she became one of our contributors, which was all down to this extraordinary book.

The British Library has been a constant and constructive road companion for me over the last fifteen years. It keeps the films that I work on, accurately informed. It gives them focus. More importantly, it fuels my pen.

You can follow Jes√∫s on his blog at The Hidden Cracks of Oblivion, or on his Twitter feed.

Posted by Innovation and Enterprise blog editor at 4:58 PM

Fran Taylor our Marketing Manager for the Creative Industries has launched an exciting Spring Market competition.

The prize is a stall at our Spring Market  to be held on 1 March on the British Library piazza.

The Market is part of our Spring Festival and will show off the work of 12 of the most innovative jewellery, fashion, home-ware and craft designers who have used the British Library.

If you have attended an event, used our Business & IP Centre, seen an exhibition or have a Reader Pass you are eligible to enter.

As well as the market stall, your work will be featured on the British Library website and promoted on our Twitter feed, Facebook  and our blogs. As well as a British Library press release sent to major national and local publications. 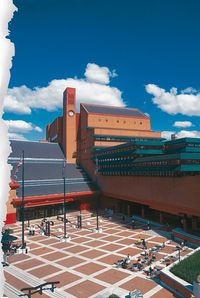 We are looking for designers and makers who:

Posted by Innovation and Enterprise blog editor at 2:32 PM

Arthur Paul Pedrick (1918-1976) was an eccentric British inventor with numerous patents. Niels Stevnsborg has just had an entertaining, and well-researched, article about him published.

It appears in World patent information, December 2011, vol. 33, no. 4, pages 371-382. Pedrick -- "AP" -- was from a family of Royal Navy engineers, and he himself served as a temporary Engineer Lieutenant in World War II. From 1947 to 1961 he was a patent examiner at the UK Patent Office, and was supposedly dismissed for inefficiency.

For the rest of his life he filed patent applications on a wide variety of subjects. As far as I am aware he is the only patent examiner to have branched out into patenting in modern times (there were a few in victorian times). Although often (always ?) regarded as unworkable, and not though ever to have been put into practice, they are often on environmental themes, and ahead of their time. He regarded himself as a one-man laboratory, although sometimes assisted by his cat Ginger, with whom he has discussions in some of the patents.

The patents include GB1426698, which is both a peace-keeping nuclear device and a cat flap which admits ginger-coloured cats only, and the illustrated Process for producing hydrogen and electricity from sea river or lake water. 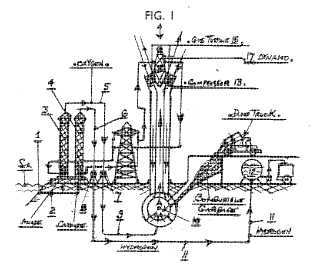 The article is a fitting tribute to a man who is famous in patent circles.