It has been quite a summer in Britain this year, and IŌĆÖm not just talking about the weather.

First we had lots of celebrations and events to mark the QueenŌĆÖs Diamond Jubilee. The biggest was the rain lashed Thames Diamond Jubilee Pageant, with 1,000 boats assembled from across the world. Once again the Telegraph cartoonist Matt (left) summed it up perfectly.

Then we had the London 2012 Olympic games, closely followed by the Paralympic games (not ParaOlympics as some thought).

In keeping with the business nature of this blog, IŌĆÖve been keeping an eye out for memorable memorabilia for these three ŌĆśonce in a life-timeŌĆÖ events. 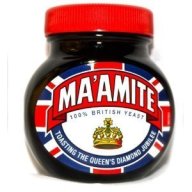 I think my favourite has to be the MaŌĆÖamite jar adapted from the long-standing Marmite brand. ItŌĆÖs a bit cheeky, but not too disrespectful of the Queen. And it seemed to find favour with supermarket buyers, as it seemed to appear in everywhere during June. In case you bump into her Majesty, you will need to remember itŌĆÖs pronounced Mam as in Jam, not MaŌĆÖam as in arm.

A rather less respectful, but also best selling product was the Diamond Jubilee Sick Bag. This was a natural follow up to graphic artist Lydia LeithŌĆÖs unusual souvenir to mark the royal wedding between Prince William and Catherine Middleton in 2011. There is a strong tradition of not taking those in power too seriously in the UK, so it was not such a surprise to see this novelty item become something of a best-seller. 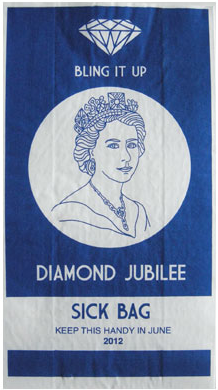 I actually prefer the Waving Queen toy, whose solar power handbag meant she would give a proper royal wave whenever the sun came out. I was given one as a present, so took her on holiday to France where she made a great impression on the local gendarmes. We were even given a formal salute, and a french accented ŌĆśGod bless her MajestyŌĆÖ, as we drove through a police road block in Normandy.

We spent the holiday trying to perfect the energy saving royal wave twist of the hand.

Waving Queen on tour in Normandy

I think my least favourite item has to be from the Royal Mint in the shape of these specially produced five pound coins. For some strange reason they have chosen a particularly grumpy looking Queen to go on the back (or is it the front). By the way, how do you call heads or tails, when the coin has only heads?

Moving on to the London 2012 Olympics we have a rather motley set of  memorabilia.

Anything that is encumbered by the dreaded 2012 logo is damaged goods as far as I am concerned, even if I have not been taken in by the ridiculous Zionist conspiracy theory.

Thanks to the post games sales, I managed to pick up a Wenlock for a knockdown price, so am now in possession of this slightly scary cyclops.

You can read the background to Wenlock and Mandeville on Wikipedia. I tend to agree with the critic claiming that the pair were the product of a ŌĆ£drunken one-night stand between a Teletubby and a DalekŌĆØ.

I have to admit I havenŌĆÖt seen any of these for sale, but the Olympic Condoms story is too good to miss.

Apparently 150,000 free condoms were given to athletes participating at the London Olympics, which is 50% more than at the Beijing Games in 2008. That works out to 15 condoms for each of the 10,500 competitors who stayed in the Olympic Village. 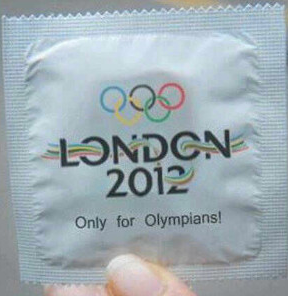 At the other end of the cost spectrum are signed framed photo montages of previous Olympic champions. For example one signed by Kelly Holmes, Daley Thompson, Steve Redgrave, Seb Coe and Chris Hoy is a snip at ┬Ż1,000.

If you fancy an umpireŌĆÖs chair or other more practical souvenir of the games such as a super-long bed, just visit Remains of the Games website. 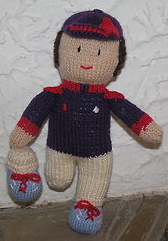 I have really struggled to find any specific Paralympic souvenirs, so I think I will have to go with the knitted Adam Hill. Adam was the host of The Last Leg, the surprise hit TV show of the Paralympics.

A fan of the show decided to create a knitted Adam Gamesmaker and to auction it on eBay for charity. Thanks to extensive use of Twitter on the show, the auction went viral and when last heard the bid price had exceeded ┬Ż30,000.

I found this to be a delight as I have long found the official US database very awkward to use, with unsatisfactory hit lists.

Tmquest has a simple search page, with suggested wording offered as you type in the letters. With some exceptions (mainly early?) the hit lists display logos, date, the Nice Class defining product or service area, and company name. None of this is true of the official site. The results can be sorted by using a tab at the bottom of the page.

I will certainly be using Tmquest from now on. I would, however, check the official site for additional information on any hits that looked important in my search, and in certain special circumstances to find additional hits.

Minesoft itself is well know for its search tools for patents such as the priced Patbase┬« database.