This is a followup to my post back in April on the subject.  Sorry for the delay in reporting back !

In June 2012, 25 EU member states agreed on provisions for the European Union Patent. Only Spain and Italy did not participate, annoyed that the only languages permitted in the scheme were English, German and French.

Some people assume that the European Patent Convention (EPC) already offers patents with EU-wide effect. It's certainly not the same thing. A granted EPC patent, which can be in English, German or French, is really a bundle of national patents, where after an initial opposition period the patent can lapse from protection in individual countries due to a failure to pay national renewal fees, or because of national revocation proceedings. Similarly it could be amended nationally.

There is no requirement to list all EU member states when applying for patent protection through the EPC. So e.g. Belgium might be omitted.

Switzerland is in the EPC but not in the EU, so membership is not limited to EU states. New EU member states are required to join the EPC, and all currently do.

The European Union Patent would involve having patents granted through the existing European Patent Office in Munich, which already deals with the EPC patents. All EU states must be included in such grants. The patents stand or fall as a result of centralised patent litigation, and lapse as a whole as well.

The main stumbling blocks in a struggle which has been going on since 1973 has been the language used in the patents and in the law courts, plus where the law courts would be.

The following provisions have been agreed on:

The patent specification can be in English, German, or French.

There will be a single renewal fee for the entire EU.

The Unified Patent Court will deal with infringement and revocation proceedings. It will have a court of first instance and a court of appeal. The court would have its seat, registry and central division in Paris. Litigation is in the same language as the patent.

The central division would have thematic branches in London (chemistry cases, including pharmaceuticals) and Munich (mechanical engineering cases), each expected to take about 30% of the case load.

The choice of Paris is distinctly odd, as far more patents are published through the EPC in English or German, and London has much more IP law talent than Paris. Local courts can also be set up by individual countries.

There will be a transitional period of seven years during which either national or the Unified Patent Court can be chosen for litigation (if the latter, that choice cannot be changed).

Originally the court was to be mainly in Paris and partly in Munich, but David Cameron, the UK's PM,  protested.

Patent costs will be greatly reduced as a result of the deal. The European Union estimates that costs will fall from 32000 Euros to 6500 Euros, a saving mainly from translation costs. This does mean that some patents with force in the UK will as a result be in German or French, which will cause problems for researchers, librarians, industry and lawyers. Machine translations only go so far.

The position of Spain and Italy as to possible involvement is still unclear, as are various technical issues. Also unclear is how the new courts will be funded.

It is uncertain when all this will take effect. There is a detailed Wikipedia article on the subject.

A former disc jockey, he was aware of the discomfort suffered by dancers, particularly those in high heels. Hence his website suggests "Turn your killer heels into comfort heels”.

The invention is a new type of insole, which he calls Itsoles®. Hook and eye fasteners secure two overlapping pads (one especially for the heel, and enabling use in different shoe sizes) to the upper. The patent application’s first page says that 70% of the high heels wearer’s weight is borne by the balls of the feet, which is a lot of pressure. The application has the title Footwear cushioning apparatus. Here is the main drawing. 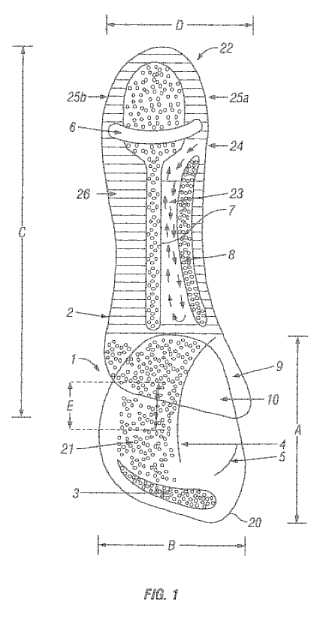 No offers were made, as it was thought that existing products were satisfactory and that major competitors might compete. I have found in my one to one meetings with clients that any suggestion that a well-placed company might launch a rival product to the client's is often met with incredulity on the grounds that "they wouldn't, I'd have a patent".

Maybe, but besides designing round the patent, some companies are willing compete and then be challenged, so that they can then challenge the patent's validity. Which is one reason why there are a lot of lawyers.

In the 25 November episode, Mark Ferguson and Emma Jones explained their MyBunjee® product. It prevents mobile phones suffering loss, theft or accidental falls to the floor by using a coiled “bunjee cord” clip.

In the pitch they said that they were “14 months into a patent and the searches are being done at the moment”. Searches by patent office examiners are vital as these are used to grant, reject or modify applications (although others can comment). In this case, a search dated June 2012 at the end of the patent application listed numerous examples of prior art, which shows how long it takes the TV show to air.

The UK patent application is entitled A holder for a portable item comprising an attachment device and a holding device linked by a resilient member and there is also an American patent application. Here is the main drawing.

These earlier, similar patent documents can be found by, when looking at the PDF of the patent application, clicking on Cited documents on the left hand side.

Not listed there is the website for Cell Bungee, which had also been listed as relevant.

Peter Jones, who apparently already had a similar if inferior product, offered to use his extensive contacts to get big orders quickly. Therefore his offer of the requested £70,000 in return for 35% of the equity was accepted, although offers of the same for less equity had been made.

A whole half-page story in tonight’s Evening Standard about a firm who have been creating poor imitations of Disney blockbuster films.

Posted by Innovation and Enterprise blog editor at 12:36 AM

The Daily Mail made a big fuss about Cadbury's "Willy Wonka" chocolate that doesn't melt even if in 40C heat for three hours in an article on the 24 November.

Much of the pleasure in eating chocolate is enjoying the slow melting in the mouth. This readiness to melt has caused many problems in shipping, storing and displaying the product in hot climates. Cadbury claims to have found a method of breaking down sugar particles into smaller pieces and reducing how much fat covers them. This makes it more difficult to melt.

This would, however, also affect the product as an eating experience. The article quotes Mr Bilsborough, from Kraft Foods, the owner of Cadbury's, admitting that the new bars would not have the same melt-in-the-mouth quality as normal chocolate. He is quoted as saying "The melting point is what makes the bar so attractive, as that is what releases the flavour. If it melts at a higher temperature, it will take longer for it to melt in the mouth."

The recipe will only be available in countries such as India and Brazil -- to the annoyance of those quoted in the article, who want it available in the UK, a country not noted for its heat waves.

The article mentioned a patent, but in fact there are two World patent applications (not granted patents) describing the technology, both published 1 November. Both are named Temperature tolerant chocolate, and they are numbered WO2012/146920 and WO2012/146921.

At present they are awaiting approval by individual patent systems round the world. Information on prior art -- what has been done before, and which could invalidate the applications -- is contained in the search reports at the end of the patent specifications. Broadly speaking, an X in the report means that a cited patent or other document means that it is highly relevant in relation to the patent claims in the Cadbury applications. In this case the reports contain quite a few X citations.

These "citing documents" can be seen by clicking on that tab on the left hand side when viewing the patent applications.

Cadbury has earlier tried a different approach by trying to change the packaging to improve resistance, a perhaps more hopeful approach.

In an August 2010 story, again in the Daily Mail, it was explained that submissions were invited from inventors for packaging that could be used for chocolate that repeatedly heats and cools. According to the story, the company suggested "'novel' insulating materials or films which are perhaps triggered by temperature or light and can store and release energy to heat or cool the chocolate accordingly".

This is an example of "open innovation", using expertise from outside the organisation on the grounds that there are plenty of experts who don't work for you. The British Library has been actively involved in efforts to encourage this kind of exchange of expertise in both industrial and office environments.

During this years Global Enterprise Week I finally had a chance to catch-up with Guy Jeremiah one of our Success Stories.

Posted by Innovation and Enterprise blog editor at 11:10 PM

Once again the Business & IP Centre had a stand at the Business Startup Show (this year bigger than ever and moved to Olympia).

Posted by Innovation and Enterprise blog editor at 11:24 PM

Posted by Innovation and Enterprise blog editor at 6:09 PM