Retailers depend on increasingly complex machinery and software to store and retrieve stock when they receive orders, something which is happening on a huge scale, of course, this close to Christmas.

I was reminded of this when reading the very interesting BBC story Logistics: rise of the warehouse robots.

An example of what the systems can look like is given in the drawing shown below, which is from the (German language) Storage and picking system. 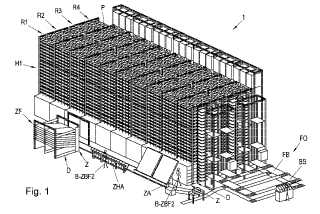 The systems are expensive, but they do mean that the right items can be correctly and quickly identified and retrieved. Storing them in an optimal way so that the most highly requested items are quicker to retrieve is often part of the system as well. Using staff would take much longer and would occasionally involve errors. It is easy to take all this for granted.

Autostore was mentioned in the BBC story. This Norwegian company has a system where instead of retrieval being based in aisles between high stacking, robotic units move around above a huge cube containing the retrieval system. They have an American patent on the topic, Method for organizing the storage of different units, which dates back to 1997.

A list of those World patent applications in B65G1/137D, the ECLA for such equipment designed to fulfil orders in warehouses, is given here.

Amazon went to the trouble of buying a company involved in the field, Kiva Systems, for $775 million. This is a list of World patent applications by Kiva Systems.

It’s not just retailers who find such systems useful. Pharmacies can use them as well, while the British Library is building a storage area for its paper copies of newspapers at Boston Spa, Yorkshire, which looks just as space age as any automated retail warehouse. The same principles apply. Automated shelving still needs to be installed before the newspapers are put there.