There have been newspaper reports, such as an article in the Evening Standard, that Nudo, a small olive oil producer, is stating that Marks & Spencer are using a very similar olive tree logo to theirs on their olive oil range. Here are the contrasting logos. 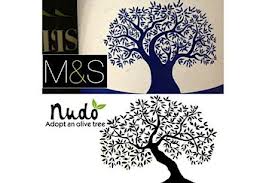 Nudo was founded as a company by Jason Gibb and his partner Cathy Rogers in 2005. Her sister designed the logo. It is a premium Italian olive oil.

In 2011 Marks & Spencer launched their range, and it seems strange that the dispute has only just occurred. Mr Gibb is quoted as saying “I just want these big players to stop ripping off the small guy.”

M&S deny copying the logo and say that the olive tree theme is common in the sector “as customers instantly associate them with the product”.

While I am not a patent attorney or lawyer, I wonder if Nudo would be on stronger ground if they alleged not copyright infringement, which is what seems to be happening, and where copying must be proven, but rather trade mark infringement. The problem is that the olive tree logo has not been registered by Nudo. In fact they have not registered Nudo as a trade mark either. I checked all three systems that cover the UK: the national, European and Madrid Agreement Protocol.

It would have cost just £170 to register a UK trade mark via the Web at the UK IPO for activities in Class 29, which includes olive oil. It is possible that they would have been asked to add the word Nudo to the logo to make it more distinctive, which in turn would admittedly weaken any claim to trade mark infringement. There are several registered trade marks that include the word Nudo, and one covers Class 29:

Trade marks can co-exist in the same class if no conflict arises: few would associate sushi with olive oil, I suggest.

As so often, one for the lawyers to sort out.

London's Centre for Fashion and Enterprise has put four guides to aspects of intellectual property and the fashion industry up on the Web.

They all have the title Intellectual property and the fashion industry and are on trade marks; design rights; copyright; and licensing. They date from March 2012.

These are practical guides to carrying out business in the industry, with real case studies to illustrate strategies -- hence mention of Jimmy Choo and Vivienne Westwood, for example. They look very useful. My only small quibble is that the mention of "design rights" could be confusing as "registered designs" and "design rights" are two separate rights that can be used to protect the appearance of things, while the brochure covers both.

The Business & IP Centre here has a Fashion Industry Guide listing valuable sources, mainly in reports held on paper or in subscription databases, which can be used by its readers.

The UK Intellectual Property Office has launched an IP Healthcheck page. It is free but you have to register.

Many companies are poorly informed about the intellectual property owned by the company. They may know about the patents, registered designs and registered trade marks they have, or perhaps they do not have any. Are they aware of the automatic rights they have such as copyright, design right, unregistered trade marks and trade secrets ? The idea is to get companies to answer questions so that they become more aware of the intellectual property they actually possess.

A confidential report is sent back once the questions are answered. Inevitably this cannot be sophisticated, but at least it is a start for companies that simply don't know where to start. The knowledge of what they have can be used to gain a commercial advantage or to get financing, for example.

The links on the left hand side of the page are very useful as they list many sources of further help such as advisors and libraries that specialise in intellectual property. There are also links to business support publications such as non-disclosure agreements (also called confidentiality agreements).

In my experience a lack of awareness of contracts and non-disclosure agreements is often the biggest problems for start-ups who simply don't know where to start. Rather than talking to other companies and making verbal agreements I suggest that they first start asking for help on strategy from advisors. For example, here in London the British Library offers free one-hour Business & IP information clinics, where staff talk on a "one to one" basis to those planning to start up a business.

This consultation is available as of today as Taking forward the Gowers Review of Intellectual Property: Second stage consultation on copyright exceptions. There is a lot there for anyone interested to digest -- it is 100 pages long.

Comments are invited by the 31 March 2010 as explained on this page.

The UK Intellectual Property Office has launched a consultation on proposed changes to copyright exceptions.

It proposes changes to the way copyright works in the UK and asks for comments by the 8 April. It may sound a bit dry, but it is very important that careful responses are made by interested organisations and people.