Oxford’s Museum of the History of Science is hosting what they describe as “An exhibition of quirky patented devices with unusual uses, from musical board games to seemingly unbreakable padlocks.” It ends on the 10 March, and is free. 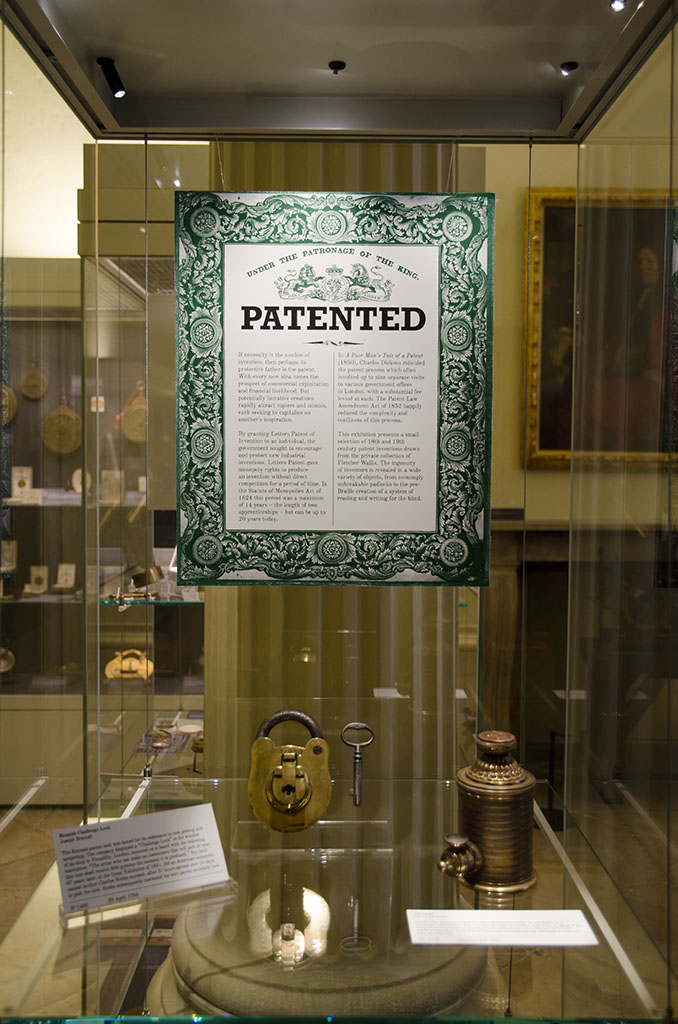 And here is an image of the display about a corkscrew invention by Sir Edward Thomason. 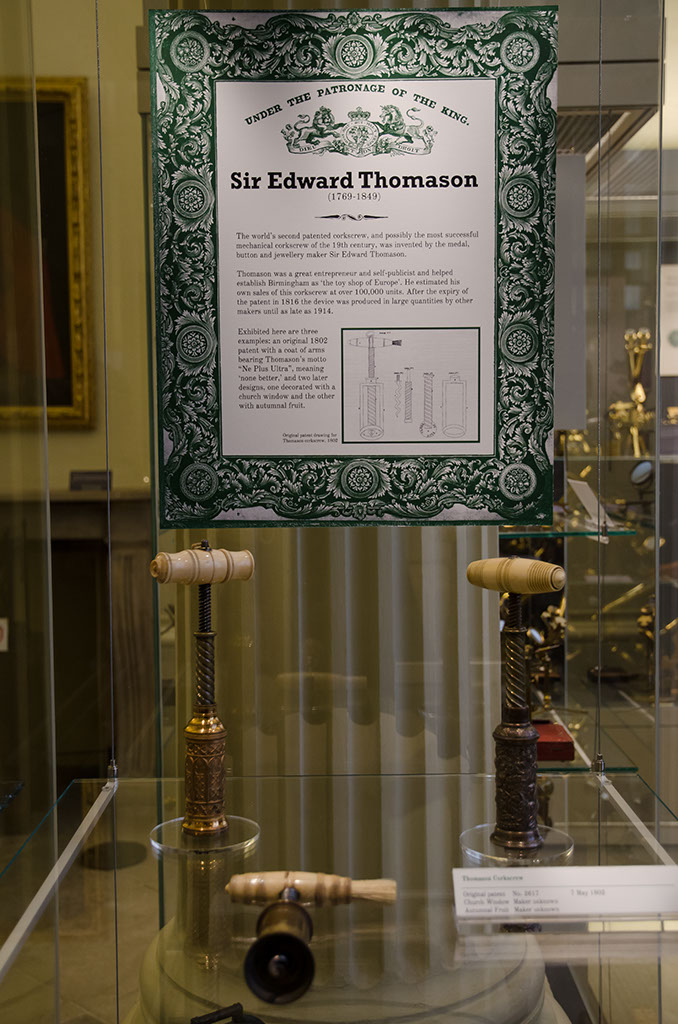 It all sounds great fun, and I am sorry that it is unlikely that I will be able to get up to Oxford to see it. From my experience I am only too well aware that while most patents are for useful if sometimes dull improvements, some are – well, distinctly strange. I am sure that a visit to see the exhibition, and indeed the museum (which I have never visited), would be very enjoyable.

London’s Science Museum has a free exhibition until the 9 September, Make it in Great Britain.

I visited it yesterday. It features numerous products, some huge such as a Lotus sports car or wheels from civil airliners, others small. The idea is clearly to stimulate the imagination of young people. Detailed explanations accompany the exhibits on show. The emphasis was normally on the science or technology behind the products, with no mention of intellectual property that I could see.

I feel that more could have been made of it. I would have liked to have seen more on the stories behind them – why did the company develop the products ? – and how specific problems in making the right product at the right price, and perhaps in marketing them, were overcome.

Above all, as it’s called Make it in Great Britain a mention of where the products were developed or made would have been interesting (this was rarely mentioned), and why it was considered important that we continue to innovate in product design and in production – a comparison with Germany, perhaps ? Voiceovers or films featuring the engineers would also have been welcome.

I suspect that the ideal visitor is probably a clever 14 to 16-year old who finds science fun and who is already interested in a career in design, or production technology.

There are certainly plenty of things to look at, and I learned about a number of products that I hadn’t heard of before. There was an explanation for example of Johnson Matthey’s autocatalyst, made at their plant at Royston, Hertfordshire. They have numerous patent specifications in this sector.

West House in Pinner, Middlesex is hosting a free exhibition called Heath Robinson Machines and Inventions until the 17 April. It is in Pinner Memorial Park.

I came across it entirely by accident on a walk, and found it delightful. There are numerous original drawings showing "contraptions" such as devices to help you get up from a chair, or how to clear away the breakfast dishes. They are lovingly detailed and packed with humour.

William Heath Robinson (1872-1944) is the British equivalent of America's Rube Goldberg, and lived at West House for a decade. The Chris Beetles Gallery is hosting the exhibition, and the drawings are for sale (those sold have a red sticker). The Gallery has a webpage with links to many of the exhibited drawings.

I happily spent an hour looking around and talking to the Gallery staff before I reluctantly tore myself away. The Chris Beetles Gallery will be adding the show to a "major and comprehensive" exhibition of work by Robinson during the 25 May to 22 June at their 8 & 10 Ryder Street site, SW1.

It's the final week of our free Inventing the 21st Century exhibition so hurry if you want the chance to touch some cool products and see and hear about them. We've just added photos of the exhibits on Flickr's British Library photostream.

We wanted some interaction: so we came up with Invent it !, where we invited visitors to the exhibition to submit on slips of paper their ideas for what inventions were needed (not the solutions). They are then put on large clips so that others can read them.

We had a large and interesting response, and Mark Sheahan, our Inventor in Residence, has listed his favourites on the Invent it ! web page. Further suggestions can be made by the public on the Facebook page linked to there.

I've had a look at a hefty pile of suggestions, some distinctly thought-provoking. Here are some of them:

A pen that spell checks as it writes

A means to enable learning by osmosis

It's been a privilege to curate the exhibition. We hoped to entertain, stimulate and educate. Above all, to inspire. I often heard discussion of inventions as I walked through, with comments on what they liked or didn't like, or thoughts about alterations to the products. Much innovation is based on precisely that: looking at existing technology and thinking of variations to make it cheaper or better.

I particularly liked it when an eight-year old was showing his two friends the video of the Lifesaver® water filter, and excitedly saying "watch out for this" when gunge was poured into the filter, and sparkling water resulted. Youth are the inventors of tomorrow, after all.

The British Library's free Inventing the 21st Century exhibition closes on the 28 November.

We've all very been pleased to see so many people looking around it. It's not normal that we allow visitors to touch the exhibits, but that's not a problem here.

Here is our introductory video to the exhibition.

There are also interviews with some of the inventors.

Some were conducted at the opening of the exhibition. There's Alvin Smith, with his Searaser wave energy invention; Mike Spindle, with his Trikinetic wheelchair; Yusuf Mohammad, with his Automist fire-suppressant invention; and an explanation of the Gocycle electric bicycle by one of Richard Thorpe's colleagues.

Others were filmed in a studio. There's Natalie Ellis, with her Road Refresher dog bowl; Tanya Ewing, with her Ewgeco utilities monitor; and Samuel Houghton, the boy who invented a double broom.

I noticed at lunchtime a small knot of eight-year olds watching a video in the exhibition. It was Michael Pritchard's demonstrating his Lifesaver water purification bottle. One was explaining to the others what to look out for as filthy water was poured into the bottle, and after the cleansing process Michael drank the resulting clean water. Their interest was gratifying; though, as one boy struggled (unsuccessfully) to remove part of the exhibited bottle, I thought that boys will be boys.

Sharon Wright, who is the inventor of MagnaMole®, which is one of the exhibits in our (free) Inventing the 21st Century exhibition (on until the end of November), has written a very honest and passionate book about her experiences, Mother of invention.

It tells the story of her inventing the tool (which is explained at her company's website) and then trying to get it financed. Basically it's a simple and safe way of threading cables through cavity walls. She appeared on Dragons' Den, with a pitch which was described by Duncan Bannatyne, one of the dragons, as "one of the best pitches I have ever seen". UK residents can see a recording of the pitch at this site.

She looks very professional and confident in that presentation. The book says that she repeatedly rehearsed what she was going to say, which is certainly wise. She also did not sleep for two nights before the filming, and was feeling, to put it mildly, very vulnerable as she stood outside smoking, waiting for the call to the studio.

Sharon was successful in securing the finance she wanted from two of the dragons, but what she assumed was money in return for the equity she was giving up turned out to be just a loan. She made the crucial error of not reading the contract before signing -- a contract later described by an expert as one of the worst he'd ever seen.

If you want a "warts and all" description of the ups and downs of trying to commercialise a new product you will find this book riveting. It is clear from it that the support of honest (and knowledgeable) people is crucial, which is why I always suggest to inventors I meet in one-to-one discussions that joining an inventor's club is so important.

A copy of the book can be purchased at the official website.

I have already posted about our Ingenious Britons: personal journeys in invention and design event, for which a few tickets are still available. It takes place this Wednesday (22nd), at 18.15 in the British Library Conference Centre.

I frequently attend events in our Inspiring Entrepreneurs series, and find them just that -- stimulating and inspiring. Besides hearing the stories of how the inventors created and marketed their successful products, there is plenty of opportunity to ask questions. The evening is rounded off by networking over drinks and canapés. I expect to spend most of that time talking to people at a desk laden with our leaflets. Come and say hello at least if you can make it.

We now have an extra inventor besides the original four -- Michael Pritchard will be telling us about Lifesaver, a revolutionary water filter. I have already heard him speak very movingly about his taking jerry can versions of the filter to villages in the flood-affected parts of Pakistan. He has passion: something most inventors share.

All these inventors are featured, and their products can be seen, in our Inventing the 21st Century exhibition, which is on until the end of November. If you come early to the event, the exhibition gallery is open until 18.00, and it's free.

You can book tickets for this event at this page.

There is a short video about our Inventing the 21st Century exhibition at its home page which includes footage of what our Business & IP Centre looks like and features Samuel Houghton, the boy who invented a new type of broom; Tanya Ewing of Ewgeco, a utilities usage monitor, and Natalie Ellis explaining about her Road Refresher dog bowl invention. I'm there too as the curator.

The 15 products in the exhibition are listed on another page, with longer video clips for the same three inventors.

We have been gratified by the amount of interest the media has shown in the exhibition, and are pleased that many of the inventors in the show have been able to tell their stories on radio. Jim Shaikh of yoomi, the self-warming baby bottle, tells me that on Monday he got more hits on his website than in the past few months put together.