There has been publicity over the new film Battleship, based on the game of that name. Back in 1933 Louis Coffin applied for a patent for the game.

It's the classic game where opponents try to “hit” enemy ships which are marked by pegs on each side of the same vertical board. A simpler way, that is thought to predate the patent, is using pen and paper -- according to a Wikipedia article on the Battleship game, Milton Bradley published a pad and pencil version in 1931, "Broadsides, the Game of Naval Strategy". Coffin in his Game board patent suggested calling it Battleships. Below is reproduced its page of drawings. 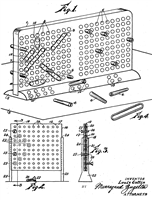 On Monday we had a presentation from James Newman and Iain Simons, co-authors of 100 Video Games, co-founders of Game City, and co-founders of the UK National Videogame Archive. And what an entertaining pair they made, switching seamlessly from slide to slide and from one to the other. They handled the great many enthusiastic interruptions from the very knowledgeable audience with patience and politeness.

They were at the British Library to talk about why the archive was created in 2008 and progress it has made since then. In practice much of the talk was explaining why it is impossible to archive vidoe games, due to their very temporary nature. Even the plastic of the early consoles is starting to degrade, ending eventually in a pile of fine grey dust.

With my background in computer science, I was expecting to hear about all the clever ways programmers are preserving the games so that they are playable on current hardware. They did talk about emulators and the good work fan programmers are doing, but ultimately their efforts are doomed to failure.

It will never be possible to exactly replicate the way the games played back on cathode ray tube (CRT) screens and 16 bit processors. And even if you could, the cultural context will have been lost. Consequently they are concentrating on preserving the experience of game-playing rather than the games themselves.

They do this by capturing live game playing at events like GameCity, and preserving written material relating to games such as Walkthroughs, also known as cheats.

They ended their fascinating and stimulating presentation with a wonderfully rude example of the challenges of completing a Super Mario Brothers level. This has had an amazing 20 million views on YouTube, but comes with a health warning as it is fully of swearing in response to the frustrations of playing the game.

As something of a failed gamer, it certainly make me laugh.

Posted by Innovation and Enterprise blog editor at 6:31 PM

Saturday's Telegraph magazine had a delightful article by Eric Clark on private inventors and companies in the USA submitting concepts to the big players in toys and games, Adventures in Toyland.

In most business sectors new ideas tend to come from in-house teams, the article says. In the toy and game industry, with a constant turnover of offered products, many of the best-sellers come from outside inventors and companies. Mattel and Hasbro both get offered about 3,000 ideas annually.

Big Monster Toys, a Chicago company, was strongly featured. It sounds like a fun place to work in, with CEO Don Rosenwinkel, in shorts and a t-shirt, saying that management "tends to run a very loose ship". Here is a list of patents by the company, which include Apparatus and method for gyroscopic steering, illustrated below. 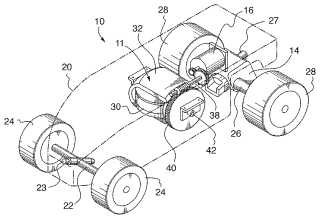 That company (and others) came out of now defunct Marvin Glass and Associates, another Chicago firm. The company was responsible for many hits, all made by the big companies (but, uniquely, with their own logo featured on them). Their output was phenomenal, with over 300 utility patents from 1964 to 1975 alone, listed here.

More famous is the Game with action producing components, manufactured as the Mousetrap®, with its main drawing shown below. 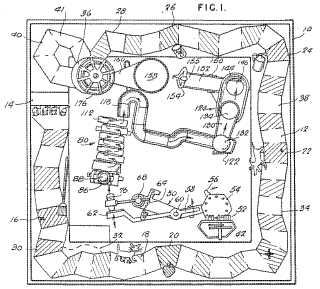 And what about their Game utilizing electric probe ? The equally well-loved Operation®.

Life at Marvin Glass and Associates was just as creative as at Big Monster Toys but was not as pleasant, it sounds. Marvin Glass himself was a chain-smoker who worked 16 hour days who expected the same commitment from his staff. He was obsessed with security, with everything locked away at night in vaults, no windows in his office, and paper stuck over windows in the offices. CCTV, highly unusual in the 1960s, was routinely used.

A tribute to Chicago's toy inventors has been made at Elmhurst Historical Museum, the exhibition Toys in the 'Hood. Here's a video about it.

The Telegraph article quotes Glass as saying that it helps with a good toy designer if he is emotionally retarded, and certainly hitting things and the like features a lot in these toys. It does bring the kid out in me, as well as a lot of nostalgia, as I grew up in New York in the 1960s.

Lonnie Johnson is an inventor who has made millions with an invention distant from his job as an aerospace engineer. He invented the Super Soaker®, the first pressurised water pistol or squirt gun.

He was working on ideas for a heat pump in his bathroom when he suddenly received a blast of water. He realised he could make a toy out of the effect he had come across. The video below tells the story.

The comment in the video that the product was a lot more expensive than the normal water pistol but that it sold because of its advantages was interesting.

His Pinch trigger pump water gun patent was published in 1991. A combination of air pressure and arm pumping is needed for its truly effective blast of water. Here is the main drawing. Johnson has worked mostly with Bruce D'Andrade (who evidently contributed the trigger mechanism) on developing the idea, and Larami (later Hasbro) is the company that markets the toy. Here is a list of American patents by him in the subject area of spraying (there are others, it is too difficult to make a single list).

The earlier model was superseded by the Double tank pinch trigger pump water gun, with its main illustration given below. The separate tank meant that gamers could refill at any time (and not just when empty, I take it). 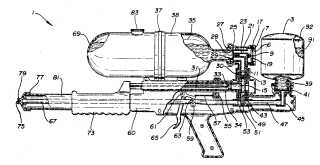 I am pleased that he has made, evidently, millions from his idea, and that he has invested some of it in building his own lab.

There's more detail on its evolution in the History of the Super Soaker page. It is unusual for a toy to have so much technical information about it. 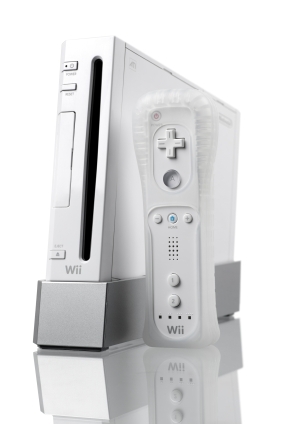 As part of the Library’s work to engage with the creative industries, my colleague Fran Taylor has been finding out some of the key facts and figures about the UK games sector.  We’d like to encourage games makers to use our collections for inspiration and contextual research and to use the Business & IP Centre to commercialise their ideas. Fran used the Business & IP Centre’s resources to gather it all together, including reports from Euromonitor, Datamonitor and online NESTA reports.

3.    In the UK, the most popular brands are the Xbox, Sony PlayStation, Kinect and Call of Duty.

4.    Almost one third of all people older than 16 in the UK describe themselves as ‘gamers’ (with an equal breakdown between men and women).  The percentage goes up to 74% for people between the ages of 16 and 19.

5.    One in every two UK houses owns a video games console.

6.    The profile of the industry is changing, with a new breed of games developers working as sole-traders, freelancers and in small companies. Growth is expected at the lower end of the price range, i.e. online and mobile games.

9.    Mobile games are the fastest growing segment of the video gaming market, with a forecast CAGR of 14.4% during the period 2009–14. Increasing mobile and 3G and 4G penetration are the key market drivers.

10.    Emerging technologies that are in a much more advanced stage of development include thought-based games, motion sensors, connected TV and HTML5.

Posted by Innovation and Enterprise blog editor at 1:59 PM

There are six American design patents (registered designs) by DC Comics relating to the Batman movies, applied for between 1989 and 1995. I was interested to see that some are by Anton Furst of London, UK. DC Comics of course created the original character.

Here they are, with the front page shown from Google Patents, and links to the documents. Many do not realise what a rich source of data on toys the designs can be, though admittedly the titles rarely give away what they are based on.

There is of course the original Batmobile used in the Batman television series that premiered in 1966. The actual car was the subject of USD205998, by George Barris. He was asked to make a car for the series and bought a 1955 Lincoln Futura concept car from Ford for one dollar. He then spent $30,000, and three weeks with his crew of mechanics, creating the car seen on television. Now that's nostalgia.

Microsoft's XBox 360® Kinect looks like it will be a popular present this Christmas.

It's a game controller that doesn't need the user to hold or wear anything. I saw it demonstrated recently in Selfridge's, and the kids trying it out were certainly enjoying themselves, as they awayed from side to side, and figures in a raft raced down a torrent of water.

Instead of for example sensors monitoring what the user's hand held device does, cameras monitor the user. In fact it's more than that -- the company says it "contains a camera, audio sensors, and motion-sensing technology that tracks 48 points of movement on the human body. It has the ability to recognize faces and voices." The Kinect itself, a slim black box, plugs into existing XBox 360® units.

Back in August, the Gadget Website explained that they had found the relevant patent application, which was published only the day before, on the 5 August, as Gesture keyboarding. Here is the main, rather odd drawing. 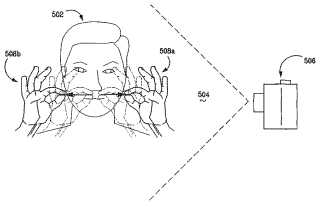 The product was first demonstrated in public at a Cirque du Soleil performance in June this year, as part of the Electronic Entertainment Expo in Los Angeles. There are many clips including footage showing how the device works, such as this YouTube clip which was a "teaser" advertisement before the launch.

Xbox 360® is a registered Community Trade Mark, while an application has been made by Microsoft for Kinect to be a trade mark as well. I was surprised not to find any "equivalent" patent applications for the invention for other countries, which normally would all be published at about the same time.

The Tamagotchi®, the handheld virtual pet, has sold well over 70 million since Bandai put it on the market in 1996. Initially it was so popular that school children were mugged in the streets.

Although the original idea is not thought to have been patented, there are a number of patents by the company for refinements in the idea, such as Simulation device for fostering a virtual creature and Nurturing simulation apparatus for virtual creatures. The "pet" has to be looked after by clicking buttons or it will suffer. A clever idea, it was perhaps originally thought of as a substitute pet for Japanese children living in tiny flats. Here is a drawing from a relevant patent. 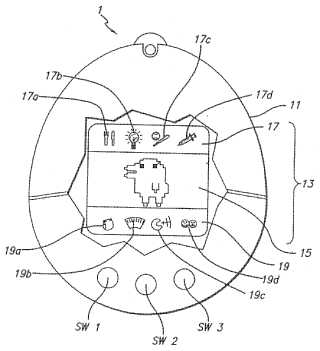 Apparently there were problems when children took them to school as otherwise they would "die" if not cared for. Many schools banned the product. Parents often thought that it took up too much of the time of their children. Later models had for example a pause feature to get over such concerns.

The concept has continued to evolve, with links to the Internet and to friends' Tamagotchis. They can be bought now for less than £9.

Many patents for the general idea can be found by using patent class G06N3/00L. This is for "computer systems based on biological models" where life is artificially simulated. This is a list of Bandai patent documents in that class.