French company Eurovia will be installing paving slabs that absorb air pollution in Kendal, Cumbria, next month. The name for the product is NOxerÂ®.

The technology seems to be covered by their granted European patent Coating composition for sound-absorbing and pollution-abating facings, which is in French (but the claims are in English and German as well as French, see pages 5-6).

In addition, the text of the description can be translated by asking for it (in the left hand column) and then clicking on the Patenttranslate button. The results are really rather good -- you can understand what the invention is about. This function is "powered by EPO and Google" and is free. This is a recent revision of the earlier machine translations and helps when, as in this case, there is not an English language equivalent document.

So how does it work ? The coating is a mixture of spruce wood, cement, water and titanium dioxide. When it receives ultraviolet sunlight, it is able to absorb nitrogen oxide, which is emitted by car exhausts. The pollutants become nitrate ions, which are either washed away by rain or absorbed harmlessly into the paving.

The new paving has already been used in many towns in Japan. Eurovia has a page about the product. It sounds like a very interesting development, though I'm not clear how much more expensive it is than normal paving, and how effective it is in reducing air pollution for the pedestrians.

The MIT Technology Review published today an interesting article about Twin Creeks Technologies, a startup company that has an invention that they claim halves the cost of silicon solar cells.

The company's CEO Siva Sivaram has had a pilot plant built in Mississippi. Less silicon is needed and the manufacturing equipment is cheaper. He claims that the company can produce solar cells for about 40 cents per watt, half the present cheapest price. The company has raised $93 million in venture capital.

The usual way to make silicon wafers is cutting blocks of silicon into 200-micrometer-thick wafers. This means that half the silicon is wasted. This thickness is used not because it is needed to produce the power, but because thinner wafers are too brittle and would easily break in the manufacturing process. A thickness of 20 or 30 micrometers would work as well.

Twin Creeks' technology consists of applying a thin layer of metal to the silicon, using a huge machine illustrated in the article. The use of wire saws and other equipment is also reduced. Crucially, perhaps, the technology can be added to existing production lines. The company wants to sell the equipment, not make solar cells.

What is particularly interesting about the article is that is describes the company as "a startup that has been operating in secret until today". Not that secret, I think -- their World patent application Method to form a photovoltaic cell comprising a thin lamina was published in August 2009.

Thanks to my colleague Peter Gibbs who drew my attention to the article.

Entrants, who must be undergraduates or recent graduates in industrial design anywhere in the world, are asked to design a home appliance that "provides a fuller sensory experience". Electrolux's annual competitions each have a different, futuristic theme.

Entries have to be in by the 1 June 2012. Top prize is 5000 Euros and a six month paid internship at an Electrolux design centre, with second and third prizes of 3000 and 2000 Euros. The eight finalists would have presented their concepts at an event held in the Autumn of 2012 in a European city.

The 2011 theme was intelligent mobility within home appliances. Adrian MakoveckĂ˝ was the winner with his portable spot cleaner. This is a short video about the 2011 competition, the final being in London.

The presentations by the 2011 finalists is also available.

MIT's Technology Review has an interesting article called "How BP Blew its Chance to Spearhead a Solar Innovation". BP had published in 2007 details of a process for transforming raw silicon into large cubes of crystalline silicon, which would be very useful in constructing solar panels, but they dropped the concept -- and the Chinese have learnt from the patent documents.

The cubes that are made can be sliced into wafers for use in solar panels. Every manufacturer is trying to cut costs, and this is especially important in renewable energy, where efforts are made to achieve parity at least with the costs of conventional power sources. The article implies that the new technology would mean an 8% efficiency gain in manufacture.

BP demonstrated the technology in 2006 at a trade show and then published two patent applications. BP continued to test the technology and then in March 2010 closed its operation and stopped developing the technology. They later sold the rights to Dutch company AMG Advanced Metallurgical Group, who are making some sales but in a difficult market due to the world recession and, sometimes, the withdrawal of subsidies.

Meanwhile, it seemed that several Chinese companies were working on the same technology. One of these was Suntech, the largest solar cell manufacturer in the world. They have now begun selling solar cells based on the concept.

Roger Clark, who at the time was part of BP's research effort, is quoted as saying that BP was very conservative and wanted to ensure that the resulting wafers were very stable.

Suntech's Chief Technology Officer, Stuart Wenham, says that Suntech got the ideas from an inventor called Fred Schmid whose patents were about to expire. He had formed a company called Crystal Systems and was working on making crystals out of sapphire, and had tried applying the technology to silicon. This is the Frederick Schmid who has a number of US patent documents.

The inventor in BP's applications, Nathan Stoddard, also says he learned from Schmid's work -- from a former employee at Crystal Systems.

It just shows that the old patents can often be a valuable source of information and inspiration, even if the technology sometimes needs to be adapted.

The world winner of the James Dyson Award has been announced. It's Edward Linacre and his Airdrop irrigation concept.

In response to drought conditions in much of Australia, Edward has devised a system that uses water as effectively as possible. Moisture in the air is harvested and is then taken underground by pipes where it cools and condenses to water the roots of the plants. More details are given on the site.

Edward is a student at Melbourne's Swinburne University of Technology. He explains in a video on the site linked to above that he made a simple, small version and put it in his mother's garden and it produced a litre of water in a day. Even in very dry climates, he says, there is some moisture in the air.

There were over 500 contestants. Edward will receive ÂŁ10,000 and the same amount goes to his university. All the projects can be viewed on the site.

I have often watched, on television shows like Grand Designs, self-builders taking a lot of time packing straw bales to make walls, and then rounding them off with chain saws.

ModCell is a company based in Bath which has applied for patents for a Construction panel where straw bales are treated in modular fashion: you slot in the panels where needed. They already have a granted British patent, and the product is already available -- as ModCellÂ®. Here is the main drawing. 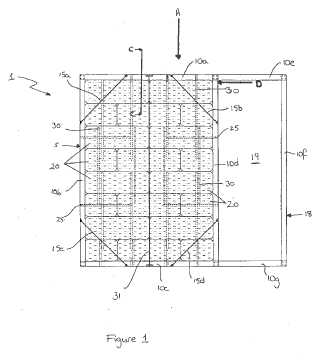 Straw is plentiful and provides excellent insulation (although rather bulky, perhaps), and is sometimes used as a green method in construction. Enabling its use in pre-made panels should make its use cheaper, simpler and quicker.

The ModCell website was very attractive and interesting, and I particularly liked reading about the BaleHaus which was built in 2009 in Bath.

The classification E04B1/35K is for "constructions using straw bales" and there are 34 patent documents in the list available on Espacenet.

The BBC website has a story about Nexeon, a company based in Abingdon, Oxfordshire, raising ÂŁ40 million from investors to scale up dramatically production of a much improved battery.

The technology involves coating lithium-ion (li-on) batteries with silicon powder. This greatly increases performance -- almost ten times the "energy capacity per gram", the company claims. It would mean either much smaller batteries or much longer life. They could be used in mobile phones and also in electric vehicles and other applications.

The key, apparently, is something called sub-micron "pillared particles". When li-on batteries are charged the lithium migrates into the silicon. As the power is used it migrates back out. This places a strain on the silicon, causing cracking and poor performance. By using powder the cycle life is greatly improved.

Nexeon was formed in 2006 as a spin-off company by Imperial Innovations, who commercialise work by Imperial College. The technology was based on Professor Mino Green's work. He was listening to a lecture where it was stated that silicon was theoretically superior to graphite but that the large volume expansion that silicon would undergo would block its use. He thought then of the pillared particles concept.

This is a list of 9 World patent applications in the name of Nexeon which mention silicon in the abstract, all published since 2008.

In 2007 the UK government created the Technology Strategy Board. its remit is to be the national innovation agency and to "accelerate economic growth by stimulating and supporting business-led innovation", with the majority of the staff having a business background.

One of the things that the Board is doing is creating six specialist technology and innovation centres. Three have already been agreed. These are high-value manufacturing; cell therapies; and offshore renewable energy. The remaining three will be chosen from ten possible candidate areas. Pooling specialist help in this way is a very valuable initiative.

There is also a list of competitions, where companies or academia can compete for funding in technical research.

There is also a growing number of publications on new technologies, which include a list of case studies, which looked fascinating. Many are on green energy, building techniques, power generation, transport and other topics that interest me.

This is definitely a site to bookmark and to refer to if your interest is in cutting edge technology.