Intrapace, a Californian company, has been working for years on a "gastric pacemaker", Abiliti®, to help obese people to eat smaller meals.

An implant in the stomach sends messages to the vagus nerve which controls feelings of hunger. When eating occurs the stomach distends and produces hormones and enzymes. The vagus nerve sends a message to the brain to say that these things have occurred. A signal back makes the stomach feel full and the person stops eating. In many obese people this message doesn't get through, and eating continues.

The device uses a sensor to detect when food enters the stomach. This fact is relayed to a stimulator embedded in the stomach wall close to the vagus nerve. The nerve is excited and feelings of fullness are created.

The clever bit is that there is a timer so that the stimulator is switched off at set mealtimes. There is 20 minutes for breakfast, for example. It does mean a disciplined approach to mealtimes.

Following formal approval for use in Europe, a woman is set to be the first patient to undergo the operation this Wednesday, at Spire Southampton Hospital, a private hospital. Trials in Spain and Germany with 200 people resulted in an average loss of 30% of weight in a year. It is not available at present in the USA. There is more information on the Intrapace company website.

Below is a drawing from the company's Detection of food and drink comsumption in order to control therapy or provide diagnostics World patent application. And here is a list of World patent applications by the company in the subject.

Usefully, the implant includes the ability to send information about the patient's diet and exercise habits to a smartphone or a PC for patients or medical staff to use. Perhaps this treatment will replace gastric bands in the future.

Drugs are a special area in patents, as unlike most areas of invention permission from regulatory authorities is needed to market them. This means that often products that have received patents cannot be used for years.

To restore the lost portion of the patent term, Supplementary Protection Certificates (SPCs) are available, which provide the lost time for protection beyond the normal 20 years from filing. Each patent office independently decides on this. Generic drug manufacturers, eager to market a product as soon as the term expires, need to know the precise date when a drug loses protection. More on this complicated subject is in the Wikipedia article and the SPC Blog.

My interest is in the recording of data in patent office journals or databases. The UK has a database for SPCs UK or EP (UK) patents which is only searchable by the patent number or the SPC number. In the case of the UK, fertilizers or pesticides can also be SPCs.

In addition, there at present 26 decisions by the UK IPO on SPCs, which can be found by going to their Results of past patent decisions database and asking for the keyword or phrase "Supplementary Protection Certificates". The decisions involve some kind of dispute between parties or an appeal against the IPO's ruling on the length of a term, or if an SPC is valid.

Because the IPO database cannot be searched by e.g. trade name, I normally turn to another source to identify a US patent for the same invention. I can then check on Espacenet for a UK or EP equivalent patent number. This source is the Orange Book, on the US FDA site.

There are other specialist databases, or data within national patent databases, and patent journals frequently contain data. As the area is so complicated many prefer to take advice from experts (I certainly do not claim to know the area well). Advice is highly recommended as it is easy to make costly mistakes.

The only such expert that I personally know is Martin Paltnoi. Our friendship goes back many years. His MPA Business Services company has recently launched a database of SPCs covering European companies which is available to clients.

Jonathan Rothberg, the founder and CEO of Ion Torrent, has developed a "desktop gene machine", which he calls the Personal Genome Machine. It was given a soft launch on the 14 December. The scientific explanation is that the machine is "measuring the release of hydrogen ions as nucleotides get incorporated by DNA polymerase". Electronics is used instead of lasers or cameras.

The ability to sequence genes is vital in many medical and other fields. The new machine costs $500,000, which sounds a lot, but the cost was formerly ten times that. Each "run" will take an hour and will cost less than $500. Now hospitals and colleges can contemplate buying one, greatly expanding the research possibilities (and the size of this niche market). The magazine article uses graphics to explain how the invention simplifies the process of sequencing. The machine is, roughly speaking, a 50 cm cube.

I looked of course for patents, and list the 8 World patent applications made by Ion Torrent which mention Rothberg as an inventor.

These consist of the topics energy and the environment, exploration, global development, and the life sciences. The Foundation's mission statement is that it is "an educational nonprofit organization whose mission is to create radical breakthroughs for the benefit of humanity thereby inspiring the formation of new industries, jobs and the revitalization of markets that are currently stuck".

The Foundation claims to be the leader in the idea of offering prizes for innovation, something that dates back at least to the British government, with its prize for a method of identifying a ship's longitude. The £20,000 award (now worth the equivalent of nearly £3 million) was offered in 1714 but was not awarded until 1773 (and then only partially, and after remonstrations by the king) to the 80-year old John Harrison.

Offering a prize stimulates interest and means that research is stimulated in areas that the prize setters think are important. In this case, the prizes can be substantial -- for example, the Automotive X Prize alone involves 3 awards totalling $10 million. A small amount if it stimulates much more investment in new technologies.

The prizes date back to Peter Diamandis' offer in 1996 of $10 million for the first privately funded reusable spacecraft. The prize was claimed in 2004 by an American company, Mojave Aerospace Ventures, with their SpaceShipOne, which flew into space that year. A larger version will be used for  Virgin Galactic's first flights into space in 2011.

The chief designer is "Burt" Rutan (actually Elbert Rutan). A list of his American utility patents is given here. Among these, relevant to the successful spacecraft's design is Unitized hybrid rocket system, illustrated below,

and Winged spacecraft. The "hinged aft portion" can be adjusted to increase drag and hence reduce speed when entering Earth's atmosphere, as shown in the drawing below. 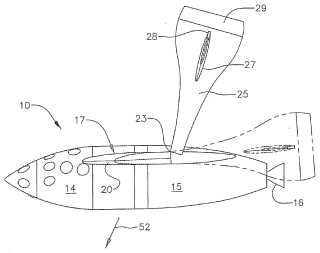 Dr Diamandis, it is not surprising to learn, is very interested in space exploration. He is also a serial entrepreneur.

Roald Dahl’s 1964 book Charlie and the chocolate factory is a fantasy with an Inventing Room for chocolate inventions. Once though, Dahl helped inspire a patented invention that helped many small children. This account is based on details given in an extract from Donald Sturrock's biography of Dahl, Storyteller, published in the Daily Telegraph.

In 1960 the Roald and his wife, actress Patricia Neal, were living with their family in New York City. Four-month old Theo was being pushed in his pram along Madison Avenue by the nanny who at the same time was coping with Theo's sister Tessa and the family dog.

The traffic lights changed and just as she began to cross 85th Street, a taxi came round the corner and crashed into the pram. The driver panicked, and instead of braking stepped on the accelerator. The pram was torn from the nanny's hands and shot into the air before hitting a parked bus. Theo's head took the full impact, and his skull shattered.

In a horrific time for the family, Theo underwent several operations to drain fluid from the head. He went home, and seemed to be recovering. Then he suddenly went blind. A psychiatrist neighbour realised what was happening: the fluid was building up again.

The doctors drained the fluid and installed a valved pump, or "shunt", down into the heart, where the fluid could be reabsorbed by the body. After a while at home Theo's sight was restored. Then his vision went again. The shunt had become blocked. Again and again it happened, with only some of his sight returning. It was unbelievable that the problem could keep recurring.

Dahl tried to understand just what was happening and soon became very knowledgeable on the subject. He recalled a man whom he had known for more than a decade. Toymaker Stanley Wade lived in High Wycombe, back in England. He was a maker of miniature steam engines, with little hydraulic pumps.

Pumps which never got blocked.

Dahl asked Wade if he could build a new shunt to the specifications required. Within a year the Dahl-Wade-Till valve was ready (Till was the brain consultant, brought over from London). It was less than 2 centimetres long, and had six tiny moving steel parts inside it. It was tried on a one-year old child, and worked perfectly. Theo was already on his way to improvement and never needed it, but the new shunt was used for almost 3000 children round the world.

That is what the extract tells us. I can add that a patent for the invention was published in the name of Wade, the Hydrocephalus shunt pump. Here is the main drawing.