The US band formed in 2009 and are quoted as saying that they were the "first to file a patent and trademark application."

You can't patent a name or wording (a common error), but you can certainly register trade marks. In February 2011 the trade mark "One Direction" was filed for as a US trade mark, which is awaiting registration, for "Entertainment, namely, live performances by a musical band". Oddly, despite the claim to formation in 2009, it states that its first use in commerce was on the 2 October 2010.

There is also Bandname.comŌäó , a free registration site even if you only want to search for band names (why make life hard for bands ?) where new bands can list unique names to avoid possible conflict, although I am not sure of its legal standing.

The US group is asking for the British group to change their name and for one million dollars, as the British group has been successful in a US tour.  According to an InsideCounsel page, the lawsuit is based on trade mark infringement -- which is strange, as the US application for a trade mark is still awaiting registration.

[The IPKat blog has a very useful post which shows that the British group have applied for a US trade mark. Ed., 17 April]

I actually wrote this blog post late on Monday night, but thanks to the unpredictable nature of web editing, the whole thing disappeared in mid-edit. Whilst mustering the energy to start again from scratch, who should pop-up on my iPod but the Dresden Dolls. Considering I have over 5,000 songs, and it is set to random, I took this as a sign to finish what I had started.

As I have mentioned before, the British Library is a wonderfully eclectic place, and the events we hold reflect this.

This Monday saw a performance from Amanda F***ing Palmer to a full house of her loyal and adoring fans in the intimate setting of British Library conference centre. With the exception of a couple of songs played on an electronic piano, AFP accompanied herself with a ukulele and mandolin.

She was also joined on stage for a couple of songs by new husband Neil Gaiman, who just happens to be an award winning science fiction writer, and who surprisingly hails from my home town of East Grinstead. Neil also gave a talk earlier in the day as part of our excellent Out of this World science fiction exhibition (which closes on 25 September).

I have to admit to not being aware of what I now understand is the cult of AFP, before Monday, so like any good librarian did a bit of desk research. I discovered she has performed as a solo performer, the driving voice of The Dresden Dolls, the Emcee in Cabaret, and as half of the conjoined-twin folk duo Evelyn Evelyn. And that her approach to clothes seems to be ŌĆśless is moreŌĆÖ. So I was somewhat surprised by her initial rather prim and proper outfit (below).

All rights reserved by Hannah Daisy

However, it did not take long for her to revert to her more ŌĆśtraditionalŌĆÖ attire of basque and suspenders (below with Neil Gaiman).

(Many thanks to Hannah Daisy for allowing me to use her wonderful photos of the evening.)

All rights reserved by Hannah Daisy

Although AmandaŌĆÖs cabaret style of music is not normally my cup of tea, I was really impressed by her intelligent lyrics, humour and emotional depth.

The only slight niggle from the eveningŌĆÖs entertainment was the swearing. Now donŌĆÖt get me wrong, I am not easily offended by rude words, and of course AFPŌĆÖs stage name gives something of a clue to what might be expected at her shows. But I am now rather bored by the number of visitors to the British Library who seem to think that swearing in such an august institution is terribly naughty, and so irresistibly cool.

My first encounter with the f-word at the Library was back in 1997, courtesy of James Brown founder of Loaded Magazine, and perhaps not so surprising given his role as father of the ŌĆśLads magŌĆÖ. You can still see him in action on our YouTube channel.

Perhaps both could be excused because this was how they expressed their great passion for their business activities.

I could see he was positively revelling in his ŌĆśrebelliousŌĆÖ swearing.

So, IŌĆÖm afraid on Monday I refused to sing along when Amanda asked us to yell ŌĆ£f*** itŌĆØ, in response to prompting during her performance of Map of Tasmania. Although, from the sound of it, I was probably the only one not joining in.

The evening wasnŌĆÖt all swearing however, and including a surprisingly warm mention of my local (and rather dull) town of Crawley, for being the home-town of Robert Smith founder of 80ŌĆÖs pop band The Cure.

She has also covered Leonard CohenŌĆÖs Hallelujah in concert with her father, which is a good sign of musical taste in my opinion.

Needless to say, in our age of social media connections, you can follow both Amanda and Neil on their twitter feeds with half a million, and one and a half million followers respectively.

I canŌĆÖt wait to see what surprises the Library will throw up next.

Posted by Innovation and Enterprise blog editor at 12:38 PM 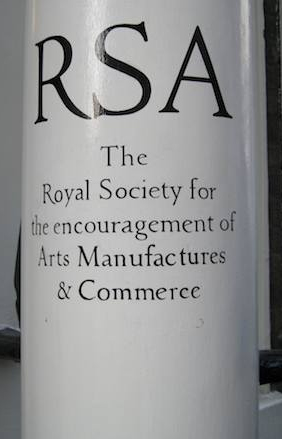 Last night was my first event at the Royal Society for the encouragement of Arts, Manufactures and Commerce or RSA for short.

Recently they invited me to become a Fellow of the organisation which is actually a charity which dates back to 1754. So I thought I would pop along after work to one of their events. The topic was right up my street, as it was concerned with reviewing the Independent Review of IP and Growth, which is being led by Professor Ian Hargreaves.

Matthew Taylor, the chief executive of the RSA had assembled a panel of experts to consider the not insignificant challenge of how the UK can develop a technology neutral IP Framework which will drive innovation and growth by serving consumer-led markets, technology companies, and research and education, as well as the creative industries.

The RSA is particularly interested in this topic as in 2005 it published the Adelphi Charter, which called for a new deal on IP for the digital age.

Given the immensely complex nature of copyright (which was the dominant theme of the evening) and the strongly held opposing views of the audience, I was impressed by how Mathew Taylor managed to keep the event in good humour and to time.

Here are my notes from the evening:

John Howkins, chairman, BOP Consulting and past director of the Adelphi Charter on Creativity, Innovation and Intellectual Property

Posted by Innovation and Enterprise blog editor at 11:25 PM

It has been announced that Sony stopped production of its Walkman┬« personal stereo in April 2010, after over 200 million had been made.

When it was introduced in 1979, this audio cassette device began to sell in huge numbers, even though it lacked a record function, which at the time was thought vital in a cassette machine. It came about when Akio Morita, the company chairman, wanted to listen to opera on his many flights. Existing prototypes of a small cassette player designed for dictation, and tiny headphones were adapted to make the product.

Morita hated the brand name, but it had been chosen without consulting him and was already being used in promotion, so he couldn't change it. He himself thought that making them so that two can listen at once was a good idea, as he had noticed his wife looking annoyed as he listened to music on it. Large numbers of that model were made, but it turned out that people regard them as personal accessories.

The biggest mistake, though, was not applying for a patent (Sony thought it unpatentable) and therefore, perhaps, not being aware of a patent by Andreas Pavel. Here is the main drawing from his High fidelity stereophonic reproduction system. 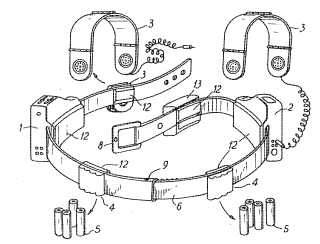 The equipment was to be worn on a belt but the principle was fairly similar, hence litigation. Pavel's patent application, made from Italy where he was living at the time, was made in 1977 and therefore predated the Sony work.

Court litigation dragged on for years.  A detailed analysis of the arguments for and against Pavel was made by Judge Peter Ford in his Patents County Court judgment in 1993, Court Decision CC/14/93 (held at the British Library), where Ford said the patent's technology was old and obvious. The case later went on to the Appeals Court, where Pavel lost again in 1996.

An out of court settlement with Pavel for using his technology (said to be in excess of $10 million) was made by Sony but, it has been said, was only possible after Morita's death in 1999.

At the recent What Hi Fi? Sound and Vision Show I spent a great deal of time on the Baylis stand talking to the friendly team.

They were demonstrating the new Eco Media Player which is a wind-up (sorry couldnŌĆÖt resist that one). To be brutally frank, this product doesnŌĆÖt exude the sheer desirability of an iPod. However, it makes a good attempt at addressing itŌĆÖs shortcomings by packing in an fm radion, a led torch, and phone re-charger in addition to its rivalsŌĆÖ mp3, video and photo players.

Its real unique selling point though is the handle that unfurls from the back of the player. They claim that just one minute of winding is sufficient to provide up to forty minutes of play. I have to say that the idea of watching the battery life drain out of my mp3 player knowing that all is required is a few spins of the charger is very appealing.

All we need now is the mobile phone with built in charging handle. I have lost count of the number of times mine has run out of power, usually at the worst possible time.

Posted by Innovation and Enterprise blog editor at 1:02 AM