How we did it: unifying the four original Magna Carta manuscripts

We’re now in the final few weeks of our Magna Carta: Law, Liberty, Legacy exhibition, and it’s hard to believe that the British Library’s celebrations to mark the 800th anniversary of this iconic document are soon drawing to a close.

To mark the final phase of this block-busting Magna Carta season, we thought we’d take a look back at one of our highlights, and one of the most exciting events the Library has ever held: the unification of the four surviving original Magna Carta manuscripts, back in February.

When the British Library, Salisbury Cathedral and Lincoln Cathedral first announced that we were going to bring the four surviving original manuscripts together for the 800th anniversary, we were overwhelmed by the level of interest in this one-off event.

Subsequent announcements about the event, from launching the ballot to win tickets to attend on BBC Breakfast in October 2014, to showcasing the amazing conservation work done on one of the manuscripts, only intensified the demand. As the team managing the access to the event for the world’s media, we knew we had a challenge on our hands. We had just one morning in which to satisfy the demand from TV, radio and print journalists to report from the Magna Carta Unification, and so we had to think very carefully about how to get the most out of the time allotted to us.

First, in order to avoid too many frustrated howls of photographers trying to capture images of the Magna Cartas through their glass cases, we created this once-in-a-lifetime photo opportunity while the manuscripts were being prepared for display.

Here’s a recce shot we put together on an earlier practice run, next to the finished article photographed on the Sunday before unification (1 February). 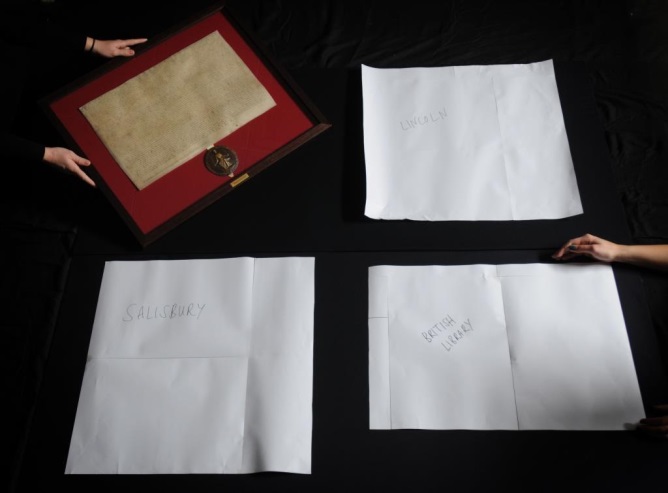 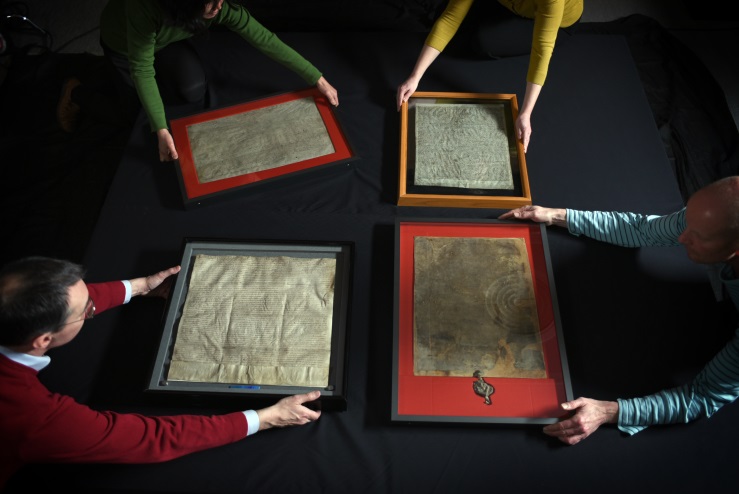 Placing four of the most valuable manuscripts in the world together, for one shot, takes a lot of planning. From the levels of light they are exposed to, to the way in which they were placed and handled, this shoot was stage-managed down to the last minute.

For those wondering, the beautifully colour-co-ordinated sleeves of the conservators featured in the final photograph was a happy accident – no one had been briefed on wardrobe in advance!

One the morning of our Media View, we started early with crews from BBC and Sky News in from 6.00am doing live broadcasts from the gallery. Throughout the course of the morning, TV crews from ITV, Channel 5, Reuters, CNN and NBC and many more were ushered into the gallery for their timed slot to report in front of the cases from this moment in history.

British Library curators were joined by the historian Dan Jones, the Deans of Salisbury and Lincoln Cathedrals , and Richard Godden, a partner at the global law firm Linklaters, our sponsor, who were interviewed throughout the morning about the significance of this historic event.

There are too many clips to share, but you can get a flavour of the excitement and anticipation we were all feeling that morning from this video created by the team from TNR production team, which was reproduced on around 50 news sites during the week.

The Magna Carta Unification celebrations continued when the 1,215 lucky winners came along to see the manuscripts on Tuesday 3 February. Surely one of the best days in the British Library’s history, this was an amazing day for everyone involved. More TV and Radio crews came along to vox-pop winners as they travelled around the Library. 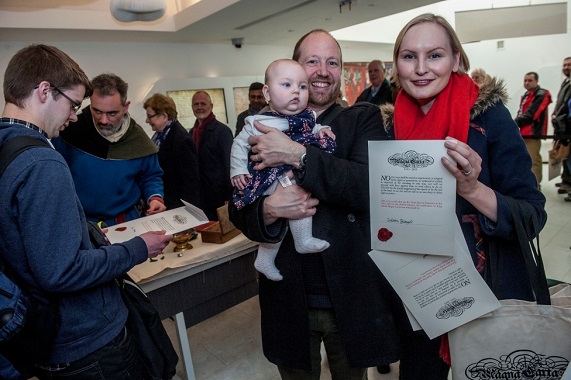 We even managed to find winners who had travelled from as far as the US, Hong Kong and the Gambia to talk about their journey to the Library, and what seeing the four Magna Carta manuscripts meant to them.

Finally, on the last day of the unification at the Library, we were honoured to be present at the academic study day in which leading Magna Carta scholars examined the documents.

We‘re forever grateful to the partners involved in this event, and those numerous teams around the Library who supported the Communications team in the media campaign for this Magna Carta moment in history. The exhibition – which runs until 1 September – has gone on to become the most successful exhibition the Library has ever staged, while our media campaign was recognised at the CIPR 2015 Excellence Awards, winning the Arts, Culture, Media or Sport category.

The next big project on the horizon is our fantastic Autumn exhibition, West Africa: Word, Symbol, Song, opening on 16 October. Look out for more about of the exhibition in the news soon!

Posted by Ben Sanderson at 6:00 AM