The Elastic System: What Can You Do with a Library?

There have been several artistic residences at the British Library. Using the Library's collections to make new work, they usually focus on some definable part of the archives, like First World War newspapers or a great writer's travel diaries. But my year-long project is the first time that an artist has been allowed access to the British Library's internal operational systems themselves. 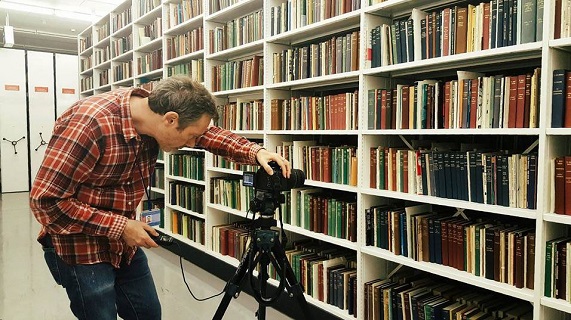 The question the project tried to answer was how to take the Library's own digital infrastructure – its catalogue databases and electronic requesting networks – and use it to make art. Or something interesting and outside of their normal functioning. What could you use all the abilities of a modern library system for, apart from just retrieving items?

In order to help me answer this question Library staff have been incredibly generous with their time and the whole experience has been endlessly fascinating. I think it is probably the most rewarding project I have ever worked on!

The initial direction in my research was prompted by one of the earliest experiences I had when I came to the library – seeing the iconic King’s Library Tower in the centre. It is the only complete part of the collection still on permanent public display.

This led me to question how and why allowing the public to just walk in and browse the bookshelves had become more and more difficult under the pressures of an enormously expanding collection, eventually leading to the development of today’s electronic systems of cataloguing and requesting. In fact, the latest storage facilities in Boston Spa are robot-operated buildings where efforts to maximise efficiency and control environment mean that humans cannot normally enter the space at all.

My response to this is a 'database portrait' of the librarian Thomas Watts that is also a work about how we try to store and allow access to massive quantities of information. In 1838 Watts invented his innovative 'elastic system' of storage and shelfmarking in order to deal with the growth of the British Library's holdings. This could be cited as one of the first modern attempts to rethink the problem of organising information. By the 1850s this had also led to his involvement in efforts to improve efficiency by removing the bookshelves from direct public access.

I decided to use the Library's cataloguing and requesting data to create a new kind of 'elastic system'. My own Elastic System consists of a mosaic image of Watts that has been generated from 4,300 photos of books currently stored in the basements at St Pancras. Each one is connected live to the Library's electronic requesting system. It functions like a catalogue, allowing people to visually browse part of the British Library's collections, something which has not been possible since Watts' time. 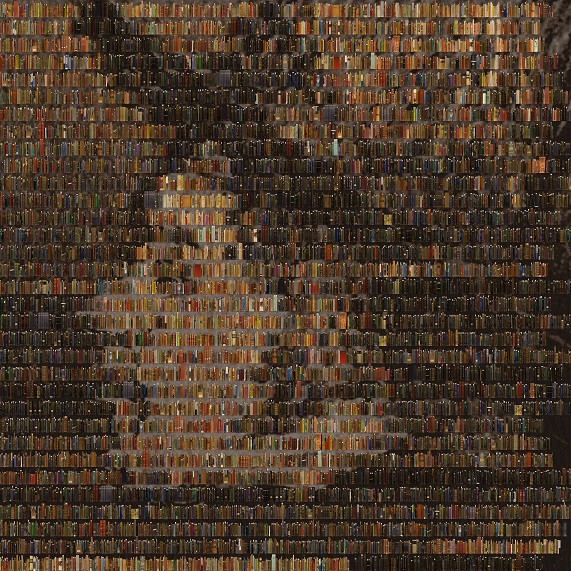 By clicking on a book visitors can find out more about the item and how to request it from the British Library. When a book is requested it is removed from the 'shelf' to reveal a second image underneath, an image that represents the work that goes on in the library's underground storage basements, the hidden part of the modern requesting system.

In order to produce the basement image I spent two days working with the basement staff at St. Pancras, photographing them according to their suggestions about how to represent the work they did, their favourite aisles, items in the collection or in-jokes. In all I took 383 photographs of 31 members of staff, nearly half of the basement team. In doing this, I tried to show that with a collection as large and as diverse as the British Library's, its successful operation depends on a well-tuned human element in the system, which although it is as essential as the electronic networks, is probably less visible and less appreciated, existing literally under the ground. Ironically, Thomas Watts himself began his career at the library in a similar role of 'Placer'. It was said that he personally placed a total of 400,000 items on the shelves of which he could recall the exact location of 100,000!

This work is part of a research project called The Internet of Cultural Things, a partnership between me (Richard Wright), Dr Mark Cote (KCL) and Professor Jussi Parikka (WSA) with wide representation from the British Library, including Jamie Andrews, Head of Culture and Learning, Dr Aquiles Alencar Brayner and Dr David Waldock. The aim of this research is to make visible the cultural data generated in public institutions and to illuminate and transform the way both people and cultural institutions interact. “Elastic System” encapsulates the many layers of an information ecology that makes up the British Library: visual, data and infrastructural systems in co-operation as a living organism of data.

You can explore the Elastic System by visiting the website: www.elasticsystem.net/