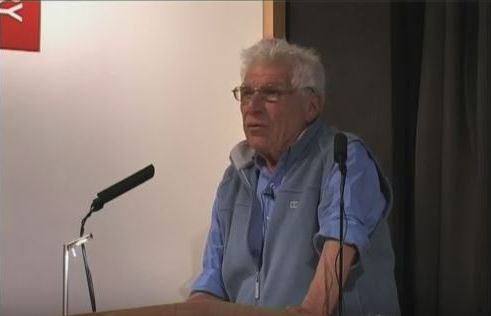 In a New Statesman interview in June 2015, John Berger—then aged 88—talked about the importance of the past to his writing and thinking: ‘You see, I think that the dead are with us…they are a presence. What you think you’re looking at on that long road to the past is actually beside you where you stand.’

Having celebrated his 90th birthday late last year, on 2 January 2017 John Berger passed away.  Much has been written in celebration of this most singular writer, critic, artist, story-teller…and much of it speaks to not only the extraordinary acuity of his thinking, but to the (equally significant) extraordinary warmth of the connections that he sparked with inquiring minds of all ages and from all countries. As his biographer, and former British Library researcher and cataloguer, Tom Overton put it so brilliantly on the Today programme, ‘Berger had this wonderful way of winking’.

I know exactly what Tom means. In 2009, I had the particular privilege of travelling to the hamlet of Quincy in the Haute-Savoie where John and his wife Beverly (who died in 2013) lived. John had offered to donate his archive to the British Library: a typical act of generosity and solidarity with an institution that exists for the public good. The papers, over sixty years’ worth, had been accumulating in the stables, and during the time I was at Quincy, I would bring them out in a wheelbarrow to work through them in the garden, overlooked by curious cows in the adjoining field. The details of the conversations have faded (though my audioboom audio diary series of the trip survives), but what remains for me so vividly is the warmth of John and Beverly’s hospitality (a concept John returns to often in his writing): the light in John’s eyes, intense but always playful, his laugh, his attention to not only talking but to listening- really listening. 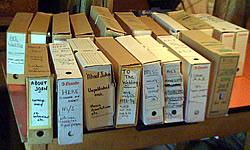 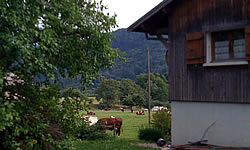 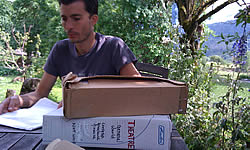 Snapshots from Jamie Andrews' trip to John Berger's home the Haute-Savoie to collect the Berger Archive.

These same qualities have been identified, with such affection, by so many of his collaborators, and his life and achievements have been summed up brilliantly in many different spaces in the past week. Now that John is no longer here, it is also perhaps legitimate to reflect on the significance of his archive. Talking about his donation of his papers, John explained that what really appealed to him was not the preservation of his own work, but archives’ ability to sustain relationships…even beyond the grave. ‘What interests me about the existence of archives is that you enter the past which is as it were in the present tense. And so it’s another way of people who lived in the past who perhaps are still living or perhaps are dead; a way of them being present.’ Like many of the characters in his beautiful 2005 book Here is Where We Meet, John is gone. But the archive remains, and so do the affective ties that linked John to friends and collaborators across the world, and that the archive can continue (in its own small way) to record and sustain.

Ways of Seeing —the book version of the 1972 iconoclastic BBC art series, for which Berger perhaps remains most known—closes with the injunction: ‘To be continued by the reader…’. An obituary suggests closure, but the true vitality of John Berger’s thinking and spirit is the certain assurance that they will, indeed, be continued.

Head of Culture and Learning

John Berger reading from Bento’s Sketchbook at the British Library on 23 May 2011.

The archive of John Berger, and of many of his colleagues and collaborators, is available to consult in the British Library Manuscripts Reading Room.