A peek into the life of… our Translator in Residence 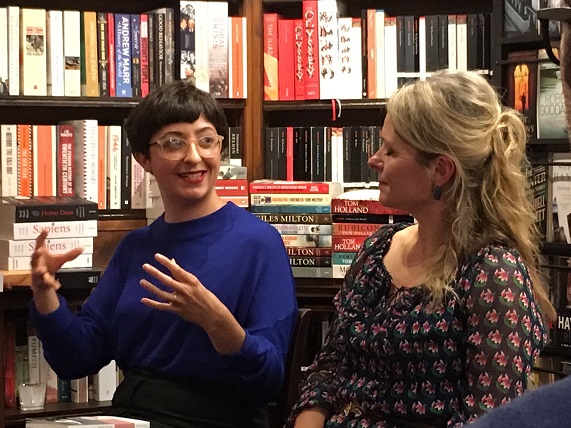 Jen Calleja is the British Library’s current – and first ever – Translator in Residence. With International Translation Day taking place on 30 September, we thought it was a good time to catch up with Jen (pictured above, left, at a recent book launch) to find out more about her, her work and what a day in her life at the Library was like.

Can you tell us a little bit about yourself?

I'm a writer, literary translator from German, editor, musician, activist and a few other things besides. I'm originally from Shoreham-By-Sea but lived in Munich for a year when I was 18 before moving to London to study and have lived here ever since. My dad is Maltese and my mum is half Irish half English, but my brother and I were brought up with only English.

What does a Translator in Residence do?

How do you spend a typical day at the Library?

The role is one day a week, so I'll spend that day in a variety of ways. It might be looking over archival material, having meetings with different departments at the Library or colleagues from partner institutions about upcoming projects or events, speaking to participants for my own events, reading the latest essays and articles on what's going on in translation, writing blog posts or even visiting the Library’s Boston Spa site to talk to their staff about their experience of using multiple languages every day.

How have the Library’s collections inspired you to create something new?

I'm currently exploring the poet-translator Michael Hamburger's uncatalogued archive to create a pamphlet of original poems based on his notes, corrections, mistakes and correspondences. I'm also writing an essay about Angela Carter's work as a translator and how translated literature inspired her own writing for the Online Learning department at the British Library. 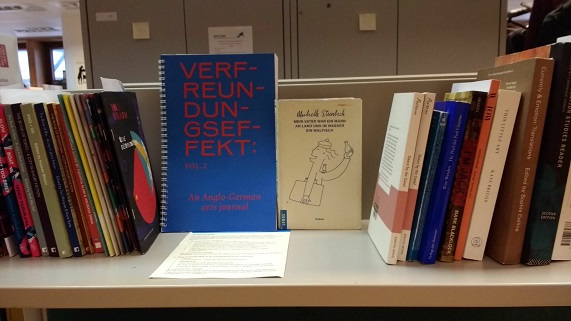 Shelfie… A snapshot of Jen’s view from her British Library desk.

What advice would you give to other translators looking to use the Library’s collection?

I'd recommend seeing if the author you're translating or even a translator you admire has any material available to view at the British Library for your research and to inspire your working process.

What’s coming up next for you?

I'll be holding a weekend masterclass in creative, multi-modal translation (image to text, text to collage, etc.) in the spring. I'm also organising a couple more events and some larger, very exciting projects that will happen near the end of the residency in April/May 2018.

Outside of the residency I've just started translating a Swiss novella by writer Michelle Steinbeck, and my translation of East German writer Kerstin Hensel's novella Dance by the Canal just came out last week.

Posted by Ben Sanderson at 8:25 AM