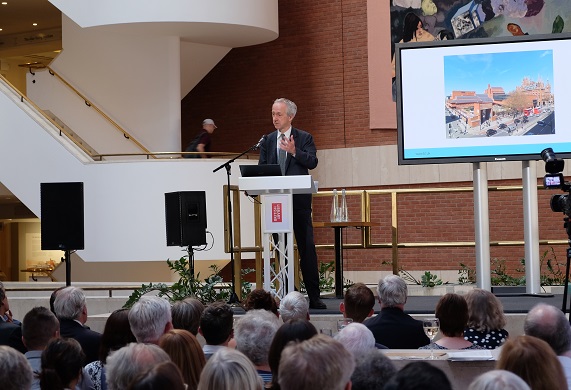 This week the Library celebrated 20 years since its St Pancras building was officially opened by Her Majesty the Queen on 25 June 1998.

We marked the anniversary by asking our users to share their #LibraryMemories on Twitter and with a celebratory event on Monday evening, where Chief Executive Roly Keating delivered a keynote speech, Building the Future: 20 Years of the Library at St Pancras to an audience of 130 funders, patrons, policy makers and supporters of the Library. A video clip shared via social media celebrated the vast range of different users of the Library (sound recommended!).

Roly's keynote speech was livestreamed via Facebook and live-tweeted through our Twitter feed. The full speech – reflecting on the Library’s development over the past two decades, and looking ahead to our exciting Living Knowledge vision – will be available shortly on our YouTube page.

In the meantime you can also watch this updated video (below) on our vision for St Pancras, which was also screened on Monday.

Designed by architect Sir Colin St John Wilson, the British Library was the largest UK public building to be built in the 20th century, and achieved Grade I listing status from Historic England in 2015.

Today our iconic London site is used by over 1.5 million people each year and is much-loved as a space for research, inspiration and enjoyment.

“This anniversary is the perfect opportunity to reflect on what an extraordinary building this is – visionary, utterly unique, inspiring to work in and to visit – and to celebrate the achievement of those who worked so hard to create it,” Roly observed. “As Colin St John Wilson said, ‘it is the essence of the Library to grow’, and we will continue to develop his legacy, evolving the Library’s St Pancras site into one of the world’s greatest 21st century centres of knowledge, meeting the future needs of our users, supporters, the local community and our partners.” 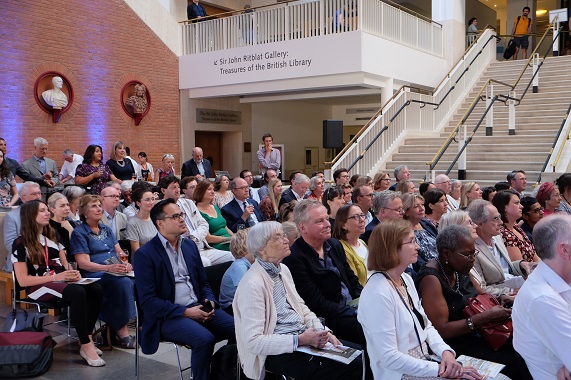 A special event at St Pancras marked the 20th anniversary of the official opening of the building. Roly Keating (top) delivered the keynote speech and the audience included funders, patrons, policy makers and supporters of the Library (above). Photos by Jean-Philippe Calvin.

Over the past 20 years the Library’s cultural programme has gone from strength to strength, with blockbuster exhibitions such as Sacred Texts, Magnificent Maps, Magna Carta and Harry Potter: A History of Magic, and a greatly expanded events programme including music, talks and festivals from the world’s leading writers, novelists, performers and thinkers.

Since the building opened, the surrounding neighbourhood of St Pancras and Kings Cross has also undergone a huge transformation, with the opening of the Eurostar terminal at St Pancras and the ongoing redevelopment of King’s Cross.  The British Library was a co-founder in 2014 of the dynamic and successful Knowledge Quarter partnership, which now includes over 90 knowledge, creative and research organisations all within a mile’s radius of St Pancras. The British Library has expanded its community engagement programme in recent years, working with local community groups, organisations and individuals to develop collaborative projects.

Last year the Library selected a joint venture led by Stanhope plc, working with architects Rogers Stirk Harbour + Partners (RSHP), as its preferred partner to develop a 2.8 acre site at the northern end of its estate.  Plans currently in development will create new spaces for learning programmes, exhibitions, business and enterprise, as well as a new headquarters for the Alan Turing Institute. The new development will ensure that the Library continues to play a vital infrastructural role in UK research and innovation.

Posted by Ben Sanderson at 9:36 AM