Open and Engaged: Open Access Week at the British Library 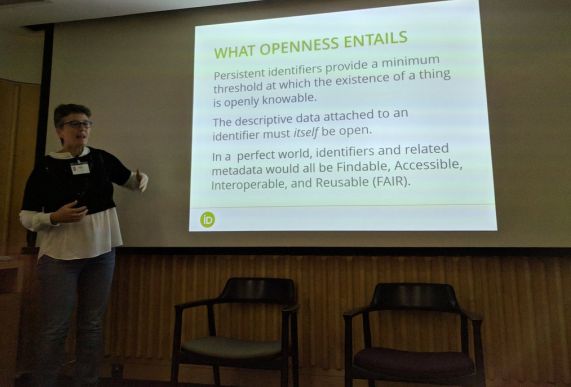 One of the key arguments in favour of open access to research is that the public should have the right to read the results of publicly funded research. While much effort is put into creating policies, workflows and business models to enable openness, are we succeeding in engaging the public with research?

On Monday 22 October, the British Library celebrated the beginning of Open Access Week with the event, Open and Engaged (see #openengaged). It brought together representatives from higher education, funding organisations, libraries, charities, publishers, NHS, government, industry and independent research organisations such as museums and archives. The purpose of the event was to broaden the conversation around open access from a largely compliance-driven approach to one of engaging wider audiences through open research. Instead of just looking at issues relating to open access publishing, the focus was on the importance of public engagement and the public’s understanding of research. In the current climate of fake news and a mistrust of expert opinion, it is becoming even more important that the opening up of academic research leads to meaningful dissemination and confident public interactions with research results.

The scene was set by opening speaker, Katherine Mathieson, Chief Executive of the British Science Association (BSA), making it clear that open does not necessarily mean accessible. As BSA research clearly demonstrates, there is a lack of engagement with science in the UK, sitting apart from core areas of culture like music and sport. While it is important to move towards openness, particularly in promoting greater transparency, Katherine emphasised the need for organisations to help disseminate such research to the different areas of the public in an effective way.

These are organisations like the BSA, Sense about Science, the Alliance for Useful Evidence, House of Commons Library and the many public libraries throughout the UK. Katherine argued that academia would benefit from operating within a system that incentivises meaningful engagement with the public, potentially through a set of global principles that could then be adapted on a local level. If we are going to promote and invest in open research through funder policies, then thought must also be given to extending the reach of this openness beyond academic audiences.

The second component to openness and engagement is ensuring that when information is delivered, people also have the skills to assess it. This raises a myriad of issues, related to information literacy, complex terminologies and transparency around data provenance to name just a few. We learnt about AccessLab, a BSA initiative to improve judgement of information through citizen-scientist pairings. We learnt about Sense about Science’s work on making sense of uncertainty in research, and the importance of tools that target lay researchers, such as Impactstory’s Get the Research, a project being taken forward with the British Library.

At the core of information assessment is the issue of trust. Trust was a theme that came up time and again despite the difference in topics of our presenters. Martin Lugton, Product Manager at the Government Digital Service, spoke of how trust and transparency were the primary motivations for the opening up of government data at the beginning of the decade. In fact it was part of a transparency agenda to address the low level of trust in politics. While we can see that this opening up has had significant impact, particularly through the 400 plus apps that have been created using data from data.gov.uk, there is still important work to be done in the space. As Theresa May stated in 2017, “it is not enough to have open data; quality, reliability and accessibility are also required”. The story so far around government open data, offers considerable parallels to the issues being addressed throughout the day at Open and Engaged. Yet the starting point for the government was still that initial push to openness, one that has seen the UK lead the way on the Open Data Barometer.

For scholarly publishing, there are still many challenges to overcome in the movement towards open research. Our second keynote speaker of the day, Professor Jane Winters from The School of Advanced Study, spoke about the evolving relationship of humanities research with open access. Despite a long tradition in the humanities of writing for the public, the transition to open access modes of publishing has been slow. It is still hampered by a lack of awareness – two thirds of early career researchers have little awareness of open access and the other third are confused –, but also a lack of funding to expand on small scale experiments in open publishing. Jane expressed a desire for a more diverse scholarly publishing scene that embraces the benefits of digital by moving away from merely replicating print content in PDF format. An issue that was echoed by Hollydawn Murray in her presentation on the work by F1000 and their efforts to bring science publishing into the 21st century.

Overcoming such obstacles is particularly pressing in the monograph space, a key medium for humanities researchers. Helen Snaith from Research England addressed this topic looking at the challenges and solutions for open access monographs. Helen also invited feedback from workshop participants. Many focused on the opportunities a change in publishing models could bring, such as an improved online reading experience, collective organising to re-invent academic publishing, and new models that focus not only on gold and green open access but incorporate public value, engagement and collaboration. That being said, there are some fundamentals of publishing that need to be addressed, and this brought the conversation back to transparency. Transparency was also a key theme in the presentation Laure Haak (see photo above) and Josh Brown from ORCID gave on persistent identifiers. Properly implemented, identifiers can not only help to discover content but also to create trust by making it clear who created, contributed to, funded and reviewed it.

The theme of transparency carried through to the concluding panel discussion that raised questions about the UK’s national approach to opening up research. To a large extent, the discussion was shaped by the recently announced Plan S. Panel members raised questions about the suitability of hybrid open access and called for a more ‘exciting’ open access model. They discussed the proposed cap for article processing charges in the context of a call for greater transparency around the costs of publishing. It was argued that only when the scholarly community are better informed to the costs of publishing, can they define an acceptable price for the dissemination of their research. Professor Parveen Yaqoob, Pro-Vice Chancellor for Research and Innovation at the University of Reading, questioned the current business models for open access, in particular for monographs, along with the funding allocation.

Matthew Day from Cambridge University Press highlighted the publisher’s commitment to open science alongside the difficulties of achieving a transition through national policies in a global publishing market. Professor Haidy Geismar, from University College London, encouraged us to imagine a cooperative ecology for open access, and to embrace a blurring of the line between research repositories and publishing. Chris Banks, Director of Library Services at Imperial College, brought us back to the opening idea of the day, speculating whether we need to broaden our idea of openness, to focus on research communication more widely and breakdown content delivery models that no longer seem useful in the online age.

We hope that by having such a varied mix of people in attendance, those somewhat outside of the open access debate became better informed about progress and obstacles in the transition to open access. Equally, those who were more familiar with these debates, had the opportunity to view them from a new perspective, to consider an expansive definition of openness. 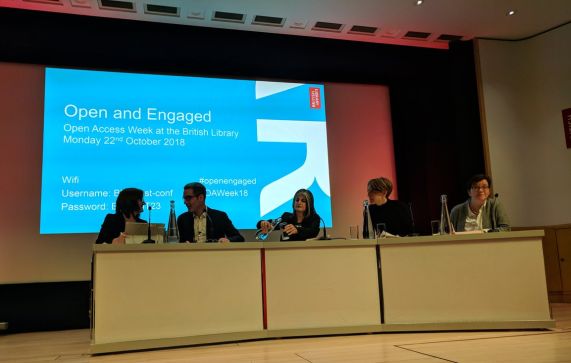 The panel at one of the Open and Engaged plenary sessions, discussing what a UK national open research plan should look like. Photos by Torsten Reimer.

In the closing remarks, Torsten Reimer, Head of Research Services at the British Library, emphasised the need for broad reflection of scholarly communications. He argued that we need to shift the focus from making research open to making it legible for different audiences. Crucially, this has to include an analysis of the way information is discovered and the role algorithms play, for good and bad. It is concerning that as technology allows us to produce and share ever more knowledge, it also seems to narrow our world view to what machines consider we want to see on social media.

Through activities like Open & Engaged the British Library hopes to contribute to a broad discussion on the future of scholarly communications, within and beyond higher education. Open & Engaged is part of a wider programme through which we expand and modernise our services under the Library's Living Knowledge vision. This programme includes projects such as a shared-service platform for access to open knowledge and new approaches to open research content up to a wider audience. As the national library, we will continue to play a pivotal role in the provision of knowledge and help to shape the global information ecosystem to deliver more equitable access to information.

Any requests for information can be sent to OpenAccess@bl.uk

Posted by Ben Sanderson at 5:15 PM