āRub the shin of the person on your left. With your face.ā

As well as being the archival home of P G Wodehouse and Michael Palin, the British Library also plays occasional host to live comedy. Featuring the likes of This Is Going to Hurt author Adam Kay, Sofie Hagen on her debut book Happy Fat, lead Taskmaster assistant Alex Horne, and many more, the Chortle Comedy Book Festival took over the Libraryās Knowledge Centre on 13 January.

In my role as a fan of both comedy and books, and a writer, editor and Tweeter of things for the British Library, I went along. 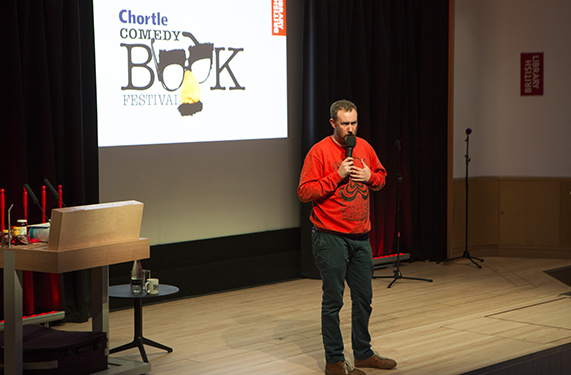 Sneak into some of the excellent sessions taking place at the Chortle Comedy Book Festival. Write about 10 things you learn during the day. You have 800 words. Your time starts now.

1. You wouldnāt want to be behind Alex Horne in the morning Reader queue. A massive cotton fried egg. A driving theory test card game. Toilet roll holders daubed in Marmite. Those who arrive early to the Taskmaster session have the opportunity to watch Alex Horne unpack a suitcase full of enough random task props and āmoney has boughtā prizes (Iāll let you guess which are which) to confuse the most experienced bag searcher.

2. More children watch Taskmaster than Dave probably expected and a lot of them are in the British Library audience. And on stage doing tasks. āDo cheer on your favourite childā instructs Alex as they rush to put up tents in which to change into adult-size onesies.

The hour is punctuated by enthusiastically-entered audience tasks (āEat the best picture out of your slice of bread. You have 200 seconds.ā) The publicās appetite for ridiculous things to do (there have apparently been two Taskmaster weddings; no Taskmaster funerals thus far) and their desire for Alex Horne to be the one to set them was what led him to write the Taskmaster book, as the Twitter requests and emails from schools became increasingly hard to keep up with.

3. The British Libraryās status as a legal deposit library features in task #154. If you think applying for a Reader Pass in order to complete a task shows dedication, spare a thought for the comedians on the show, who do seven or eight tasks a day for six days, for each series. OK, so the six days are often spread over a six month period. But everything is a genuinely unscripted surprise. 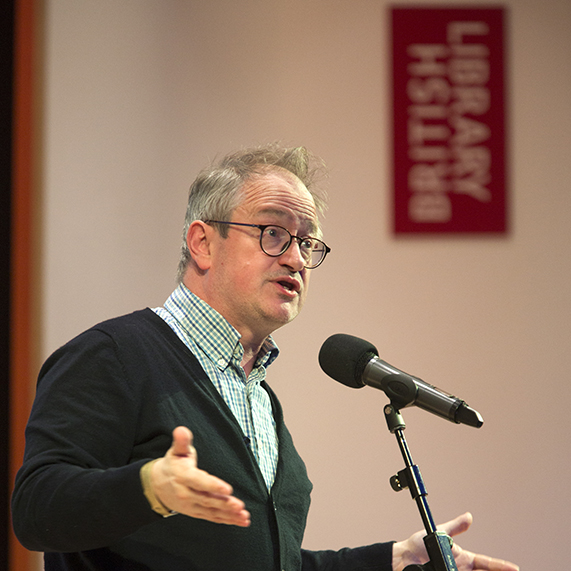 4. Robin Ince often forgets to mention his book on his book tour. Iām a Joke And So Are You asks what we can learn about human beings through looking at a particular branch of them: comedians. Both inspired and provoked by some media responses to the death of Robin Williams and the comedian stereotypes they drew on, the book targets common clichĆ©s about comics and asks whether they really are just clichĆ©s, and what they can tell us about people more generally.

5. Actors donāt like it when you tell them that you perform your internal monologue in their voice. And it turns out Robin Ince is pretty good at impressions. Alexei Sayle, Kenneth Williams, Brian Cox, 1970s Actor With an Open-Necked Shirt, his own compulsive thoughts (although I suppose we have to take his word for it on the last one). 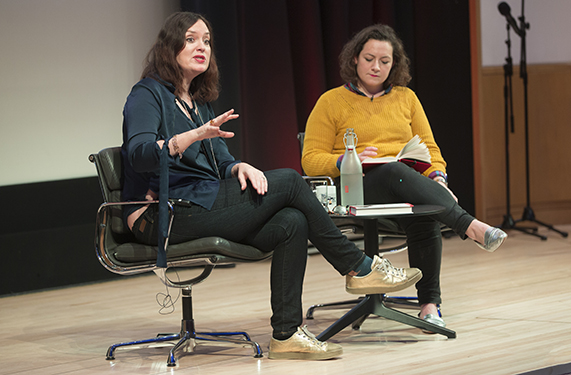 6. We should all be really cross at ploughs but youāll need to read Deborah Frances-Whiteās The Guilty Feminist to understand exactly why.

7. Comedians sometimes risk severe abdominal discomfort to avoid visiting the toilet after gigs in case they overhear audience members discussing how bad they thought they were. But Deborah Frances-White believes her brilliantly successful podcast is built on responding to criticism. If people love the podcast but think itās got something wrong, she wants to know, and it may well inform the theme of a future episode. As much as we all try to be as empathetic and inclusive as possible, sometimes, unless it is your lived experience, you donāt get it, and you need someone who does to tell you.

8. āIām a feminist andā may be what you really mean; āIām a feminist, butā sounds funnier, and the first responsibility of The Guilty Feminist podcast is to be funny. The laughter that accompanies so many of the episodes, which are often recorded with a live audience, also helps foster a sense of community. Hearing other women respond to things in the same way you do, having your experiences endorsed by others, shows us we are not alone. 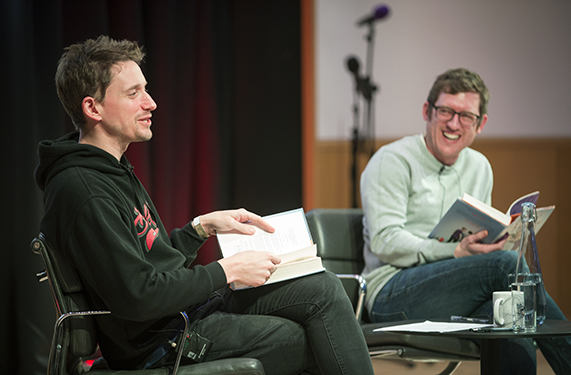 9. John Robins and Elis James have mastered the literary challenge of representing two voices in print: use different fonts.

Their session on The Holy Vible has the feel of both the book and their Radio X show and podcast ā like youāre having a good time with your extremely funny friends. The Q&A has a similarā¦vibe, if you willā¦like the audience are catching up with their mates after the Christmas break: did John enjoy the Bohemian Rhapsody film? Weāve just seen Alex Horne - would you go on Taskmaster as a pair?

10. John Robins is after my job. Anyone who speaks with such intensity on the different uses of inverted commas in British and American English and the unique misery of a missed typo is clearly angling for some time with the British Library style guide and a bit of proofreading.

Obviously this event has happened now, but you can find out what else we have coming up at www.bl.uk/whats-on