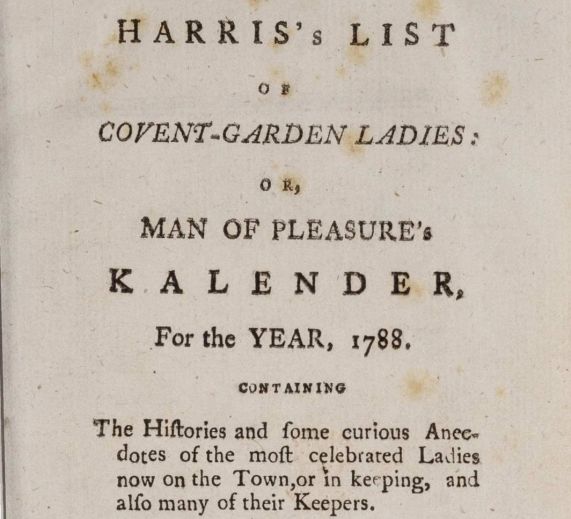 The British Library holds something in the order of 160 million collection items. Among these are millions of old and rare items that comprise texts, illustrations, maps, music scores and other content on paper or parchment. Whether printed, handwritten, drawn or painted, they need to be protected from natural decay, accidental damage or deliberate mutilation.

Many are unique: the manuscripts obviously so, but also many printed editions that may be the last survivors of their print run or carry important evidence of past ownership and use (marginal annotations, bookplates, personalised bindings, and so on). As curators, we face a dilemma. On the one hand, we want to manage access in order to help preserve these items for further generations. On the other, we have a responsibility to make them available to increasing numbers of researchers, writers, artists and designers now. 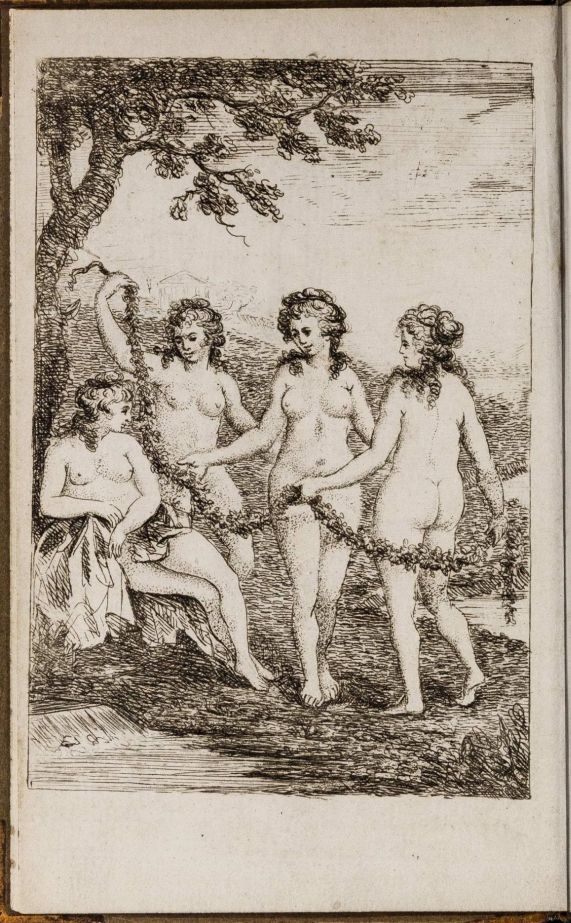 Part of the answer is digitisation, where we create full, high quality digital copies of these items and make them available via a computer network. Itā€™s not that simple though: the items need to be selected, repairs may be necessary, copyright permissions obtained, searchable text files created, catalogue records enhanced, and files ingested into a digital store, to name just a few of the steps in the process. All this is a major undertaking that requires significant financial commitment. Even where the systems and resources are in place, the sheer volume of the material that we would all like to see digitised is well beyond the capacity of even the largest libraries.

Curators have wanted to digitise the Private Case collection of erotica for many years. Its content (just over 2,500 volumes printed 1634 to 1988, predominantly English and French novels) is of significant interest to both historical bibliographers and those researching past attitudes to sex and sexuality. Broadly speaking, four options are available:

In all four scenarios, the digital images are ingested into our digital store as soon as practicable, and made available item-by-item via our online catalogues.

An advantage of options 3 and 4 is that the partner will usually build a web-based platform where digitised content can be searched, viewed and interpreted side-by-side with material they have secured from other repositories around the world. In the case of commercial partners, this platform will usually be behind a paywall ā€“ although free access will always be available from within any of the British Libraryā€™s Reading Rooms in London and Yorkshire. It could also be argued that the global reach of companies such as ProQuest, Gale, Adam Matthew and Google helps us tell many more researchers about our digitised resources, placing them into a broader context and offer opportunities for new research methods such as text mining. 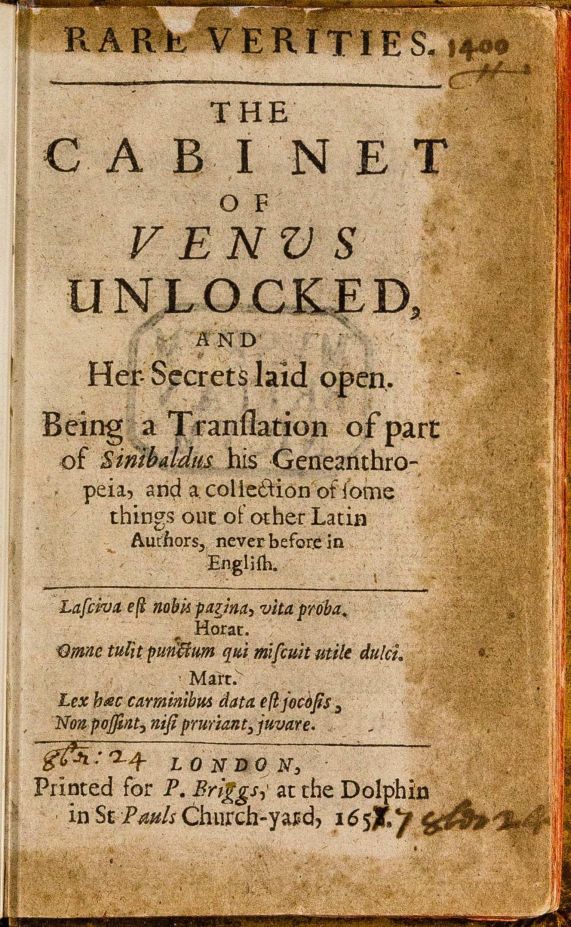 Title page of The Cabinet of Venus Unlocked, 1657.

We considered all four options for the Private Case. It would be just one of many projects competing for limited internal funds under Option 1. With something over 4.5 million pre-1901 British and European printed books and periodicals, we have to take difficult decisions about what we prioritise: other categories of material would always need to come first.

We were, and still are, already involved in a digitisation project run on money raised from the general public (Kingā€™s Topographical Collection), and we felt that this needed to be completed before we attempt another appeal (Option 2). No firm proposals had been received from academics that would result in the digitisation of the entire Private Case (Option 3).

We were therefore delighted when commercial publishers began to contact the British Library to ask about the possibility of digitising the Private Case (Option 4). The contract was the subject of a competitive tender, and the winning company was required to clear copyright permissions (not an easy task with so many covertly-published titles from the late 19th- and early 20th centuries) and provide data to improve our existing catalogue records. 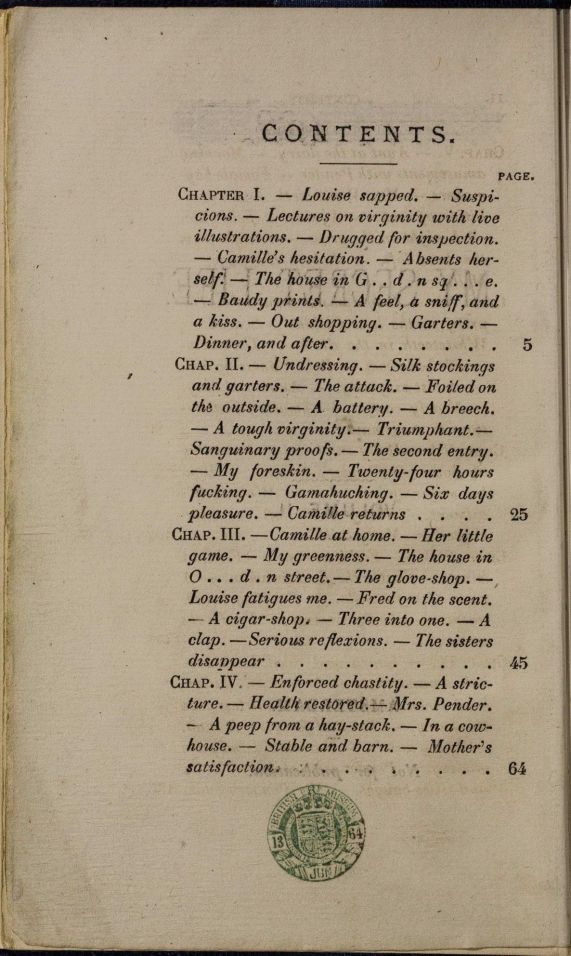 Contents page of volume 2 of My Secret Life by 'Walter', 1880 edition published in Amsterdam.

The Private Case is now available in Part 3 of Archives of Gender and Sexuality published by Gale. Here they can be consulted alongside similar material digitised from collections elsewhere. Although this is a subscription resource, it is available in many research libraries around the world, and can be accessed for free through any British Library Reading Room. At the end of seven years, the digitised versions will also be accessible to everyone from accompanying records in the British Libraryā€™s online catalogue, for free.

Returning to the original point about how we want to protect these materials from natural decay, accidental damage or deliberate mutilation, we can now point researchers to good quality digital surrogates. Managed carefully, this will mean that the originals are handled less often and should survive in a better state for future generations to investigate and enjoy.

Posted by Ben Sanderson at 6:25 PM

Jisc and the British Library share an interest in the persistence and open access of the UK research record, and work together towards this aim. As the UK national library, the British Library is an integral part of the UK research infrastructure, a legal deposit library and a research organisation in its own right.  Jisc is the digital agency for UK further and higher education and research, providing research infrastructure from the Janet network and cybersecurity to open science and research analytics.  Where those missions coincide, both institutions are sharing experiences and intensifying collaborative dialogue to ensure that the new digital developments deliver the best results for the UK research community, our members, partners and users.

Repositories are now accepted as a core function of research organisations, to curate and share digital research outputs of all kinds and support open research. The BL and Jisc are working, so far as is practical, to align our development plans to maximise opportunities to cooperate in the areas of research repositories and preservation.  We will, for example, work together on preservation workflows, on the interfaces between repository and preservation systems and metadata profiles, such as those for theses.

Looking further ahead, we will continue regular meetings between our experts in these areas, to identify further prospects for cooperation, possibly in cloud storage or in stronger operational relationships between our services.

We share a common belief in advancing open research, including ensuring that research remains available for scrutiny and reuse into the future, which underpins our collaboration. At the same time, we are aware that there is a lot to do to enable UK research organisations to meet this challenge. We hope that a focused collaborative effort between Jisc and the British Library will contribute to reaching this goal.