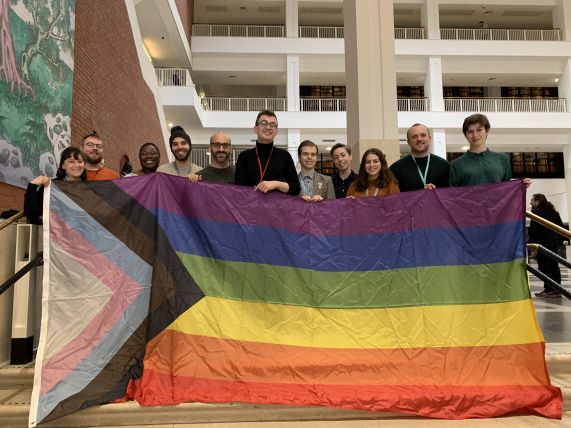 June is always a special month for the LGBTQ+ staff network of the British Library. This is when we take part in York and London Pride events, followed by marching at Leeds Pride in August. For the first time this year, we were also planning on attending Black Pride with our colleagues from the BAME network. Sadly, due to the pandemic, all physical Pride events have been postponed to 2021. However, we wanted to mark Pride month by telling you what we have been up to in the past year.

You will have seen that last week, we changed the British Library’s logo on social media. For the first time, we are using the Quasar flag. Last year, the Estates team engaged in consultation with the LGBTQ+ Network, and after running a successful survey that the members of staff voted on, the decision was made to replace the previous Rainbow flag with the new Quasar Progress flag. This new flag, which was designed by Daniel Quasar, incorporates the rainbow colours, as well as additional colours to represent our BAME and Trans communities. We purchased the flag directly from Daniel Quasar and hope that we will be able to raise it soon.

“It's nice to see the British Library showing support for marginalized communities by flying the Progress Pride Flag. I'm glad the LGBTQ+ network of the British Library reached out to work with me on making this happen, and I'm excited to see the flag flying outside their building soon.” – Daniel Quasar, designer of the Quasar flag

“I am so pleased to have this new flag. Whilst it is good to state our values, it is even greater to see them demonstrated and put in practice. June is Pride Awareness month, but it doesn’t stop there – we all in the organisation have a part to play and all need to step up and put in the effort together. Having this flag recognises that equality doesn’t operate the same across all remits, as well as raising awareness to the ways in which different remits intersect and disproportionately affect individuals.  It is warming to see an active demonstration of our values of ‘embracing equality, fairness and diversity’ and ‘treating everyone with respect and compassion’.” - Stephanie Keen, Co-chair of the BAME Network

We are incredibly proud to have this new flag, which includes BAME and Trans colours and sends the message that the Library is open to everyone. Intersectionality is at the heart of our work and we believe that we all have an active part to play towards change. The arrow shape of the new flag represents "forward movement" and acknowledges that progress still needs to be made.

The British Library stands with those who oppose homophobia, transphobia, racism and discrimination in all forms. This month more than any month, we want to actively demonstrate our values of ‘embracing equality, fairness and diversity’ and ‘treating everyone with respect and compassion’ being put into practice for everyone to see.

To mark the London Pride weekend, on June 27th & 28th, we will be lighting up the clocktower at St Pancras with a rotation of rainbow colours. Whilst Pride physical events may have been cancelled this year, the Library is still proud to celebrate Pride by lighting up the clocktower, and showing solidarity and support to LGBTQ+ people across the world. The lights will be switched on from sundown on both days, and will remain on until midnight.

We will also announce shortly a series of online events in the last week of June sharing with you some of the best talks about LGBTQ+ stories and lives that we’ve hosted in our Knowledge Centre.

We’d also like to encourage you to visit our LGBTQ+ stories website, where we explore the experiences and stories encountered in our collections, but also pose questions and seek to involve the community in thinking about answers. Articles include ‘Transgender identities in the past’, ‘Bisexuals in print’, ‘Arena Three: Britain’s first lesbian magazine’ and many more.

It’s been a busy year of events, our cultural team launched a series ‘Notes and Queeries’ inviting LGBTQ+ authors to explore their relationship to libraries and reading by ‘queering’ items from the British Library collection. Laura Bridgeman and Keith Jarrett took part in the first ones and we’re looking forward to announcing more authors when we re-open our doors. Other highlights of the year include Michael Cashman in conversation with Ian McKellen, which we will stream again on June 22nd on the Living Knowledge Network; and Jack Halberstam’s Annual Equality Lecture, which you can watch here. For the first time this year, as part of our Family Day in February, we hosted Drag Queen Story Time, which attracted a wonderful crowd of delighted children and parents.

A couple of weeks ago, our curator Steven Dryden hosted a webinar on the ‘Gay Liberation Front at 50’ taking us through the story of Gay Liberation Front UK as it marks 50 years, and discussed what happens when a radical political movement is archived and preserved by a national library. The webinar was attended by over 400 people all around the world and we should have more exciting news regarding our collections on the Gay Liberation Front coming shortly.

The LGBTQ+ network has been very busy internally to ensure that the British Library’s culture and environment is welcoming, safe and supportive for all staff members who identify as LGBTQ+.  As part of this work, we are delighted to announce that the British Library has just signed up to the Stonewall Diversity Champion scheme. We are looking forward to working with our colleagues in the Gender Equality Network and the Stonewall team to carry on this work.

“We're very happy to have worked with the LGBTQ+ network on securing this membership and we're looking forward to working with Stonewall to ensure that all our staff feel safe and welcome.” – Sophie Sabin, Chair of the Gender Equality Network

“This year, the Black Lives Matter movement in the US and around the globe is an important reminder that Pride was and still is a protest to fight for our fundamental rights. There can’t be true LGBT equality unless there is also equality for Black people. We’re delighted to be working with the British Library through our Diversity Champions programme who we will be supporting to continue working to embed LGBT inclusivity across their organisation. We know that people perform better at work when they can be themselves, and that organisations like the British Library can be an important ally in the fight for equality for everyone.” - Emma Kosmin, Head of Public Sector Memberships at Stonewall

The Everyone Engaged team launched Trans Awareness Training for all British Library staff this year and eight sessions have already taken place. Libraries have always been places of learning, thought, and reasoned debate and we want to ensure that everyone feels welcome to work or visit the British Library.

As a network, we hosted our first diversity roundtable with the Knowledge Quarter on LGBTQ+ network groups; we visited other institutions such as the V&A, the Bishopsgate Institute and the Hayward Gallery to learn from their best practices on how to promote LGBTQ+ collections; we work closely with the other institutions of the GLAM LGBTQ+ network and we took over the Twitter account of the British Library in February to highlight our LGBTQ+ collections.

We have many more exciting projects in the pipeline that we hope to announce soon. The next highlight will be our exhibition ‘Unfinished Business: The Fight for Women's Rights’, which will open later this year and will explore how feminist activism in the UK has its roots in the complex history of women’s rights. Recognising that inequality is experienced differently depending on race, gender identity, class and sexuality, this exhibition will celebrate those who have struggled to overcome the barriers to living a fully-realised life.

Posted by Ben Sanderson at 2:36 PM