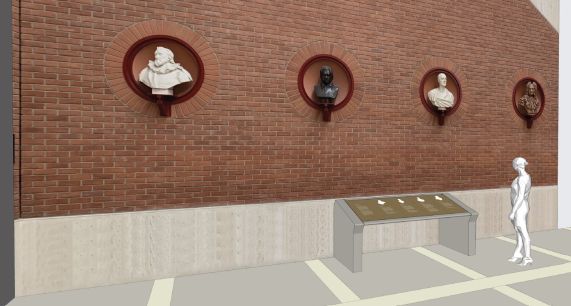 On 1 September 2020, the British Library at St Pancras reopens its public spaces and galleries for pre-booked ticket holders. While many of our visitors will be keen to come in to see firm favourites and new additions to the Treasures Gallery, after entering the building and walking up the staircase, they will also find a new interpretive panel on some of the individuals whose collections were acquired by the British Museum and later transferred to the British Library. Directly above, sit the busts of Sir Robert Cotton (1571-1631), Sir Joseph Banks (1743-1820), The Right Honourable Thomas Grenville (1755-1846), and Sir Hans Sloane (1660-1753).

While the Library, its staff, and many members of the public are consciously aware that some items we hold across our collections were originally acquired through profits from slavery or acts of imperial plunder, by providing for the first time an interpretive display on the busts, we are openly acknowledging our institution’s history and specifically the contentious aspects of the careers of both Joseph Banks and Hans Sloane.

Prior to the building opening its doors in 1997, the architect Sir Colin St John Wilson, in consultation with the Board Members of the British Library, selected a range of art works for display both outside the building and within. These include the gates of the British Library by David Kinderlsey, the 12 foot bronze statue featuring Sir Isaac Newton in the search for knowledge by Sir Eduardo Palozzi, and the enormous almost 49 square metre tapestry woven by the Edinburgh Tapestry Company depicting R.B. Kitaj’s famous interpretation of T.S. Elliot’s celebrated poem ‘The Waste Land’ – every art work selected had a function and designated place according to Wilson’s vision.

While the architect and the Library were able to commission new art works or alternatively borrow from the British Museum for the public spaces including portraits of Robert Harley, 1st Earl of Oxford (1661-1724) and Sir Anthony Panizzi (1797-1879), Principal Librarian of the British Museum 1856-66, the busts of Cotton, Banks, Grenville and Sloane were not the originals. Instead of placing the originals in the front entrance hall, the Library and Museum arranged to have facsimiles cast of these key individuals in the 1990s. In keeping with the design of the new building, the accompanying labels only contained the name of the sitter or object and the artist.

We were aware of Historic England's Contested Heritage guidance which recommends, where possible, leaving contentious statues in place but adding "powerful reinterpretation....to develop a deeper understanding of our often difficult past." Through an iterative and collaborative process, British Library curatorial and interpretation staff, supported by representatives from the Library’s BAME (Black, Asian, and Minority Ethnic) Staff Network, have prepared the new interpretive text panel. The process drew upon the expertise of British Library curators, external academics and historians, working together with our Exhibitions team and BAME Network colleagues. We wanted to ensure that the information was historically accurate and provided a comprehensive overview of each individual’s career.

Of the four busts and individuals placed in their elevated roundels, Hans Sloane (died 1753) and Joseph Banks (died 1840) are undoubtedly the most contentious historical figures. Sloane, however, was one of the most influential men of the British Enlightenment in the 18th century. He was a physician, botanist and collector and served as physician to King George II and held the posts of President of the Royal College of Physicians and Surgeons (1719-35) and President of the Royal Society (1727-41). In his will, Sloane specified that his collection consisting of 80,000 objects should be offered to the nation on provision of £20,000 for his heirs. This legacy effectively catalysed the creation of the British Museum, and Sloane’s materials formed one of its three founding collections.

The British Library is committed to becoming an anti-racist organisation. By offering a reinterpretation of these key individuals we hope to advance knowledge about the legacies of colonialism and slavery, and provide a fuller picture of these men and their careers, reflecting both the good and the bad. In addition, we have included a couple of direct, attributed statements from staff members, to provide a more personal perspective.

For the readers of the Living Knowledge blog and virtual visitors to the Library, please see below the new informative labels that are now placed below these busts for context. 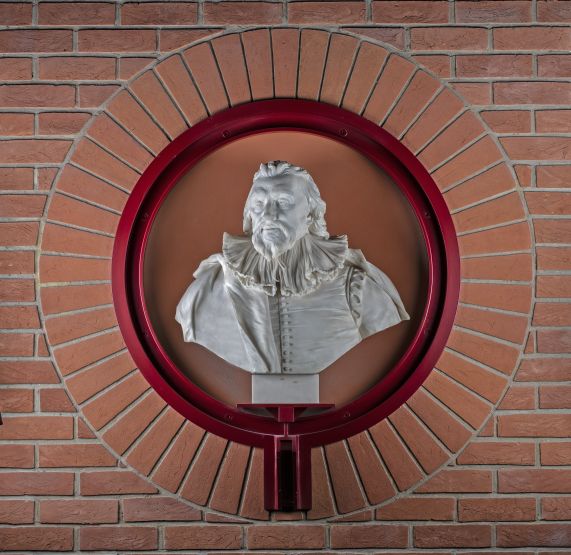 Robert Cotton was a landowner, politician and scholar. He made his collection of books and manuscripts – including two original copies of Magna Carta – available for consultation. In 1629 the King ordered the closure of Cotton’s library, which was seen as a threat to royal power, and Cotton was briefly imprisoned.

Cotton’s son and grandson expanded the collection, ultimately leaving it to Parliament to ‘be kept and preserved … for Publick Use and Advantage’. UNESCO added the Cotton manuscripts to its Memory of the World UK Register in 2018. 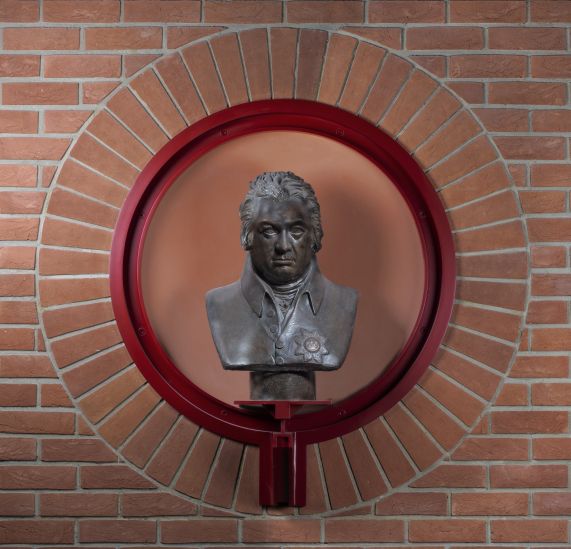 Joseph Banks was a prominent botanist, who served as President of the Royal Society, and advised on the development of the Royal Botanic Gardens at Kew. He was a key figure in the British Empire’s expansion in, and exploitation of, the Pacific. Banks self-funded his journey to join James Cook’s first voyage to the Pacific in 1768. As well as collecting thousands of plant and animal specimens from across the globe, Banks and his party described and documented ‘other’ peoples they encountered.

In a series of violent clashes during Cook’s voyage around Aotearoa (New Zealand), Banks was involved in the murder of at least one Māori warrior and was also party to the kidnapping of three Māori youths in which four other Māori were shot and killed. A decade after returning to England, Banks advocated for the establishment of a British prison colony in ‘New South Wales’, and later of the British colonial settlement of Australia, which has resulted in the ongoing displacement and oppression of the continent’s indigenous peoples. After his death, Banks’ collections were left to the British Museum, later passing in part to the British Library.

Joseph Banks was a key player in the opening up of the Pacific and Australia for exploitation and enforced colonisation. Less publicised is his direct involvement in the murder of several Māori during his voyage with Cook on the Endeavour. My Ngati Kahungunu ancestors were among those killed – a trauma we still feel heavily today. For the indigenous peoples of the Pacific, Banks is a symbol for violence and oppression under the guise of exploration and science. 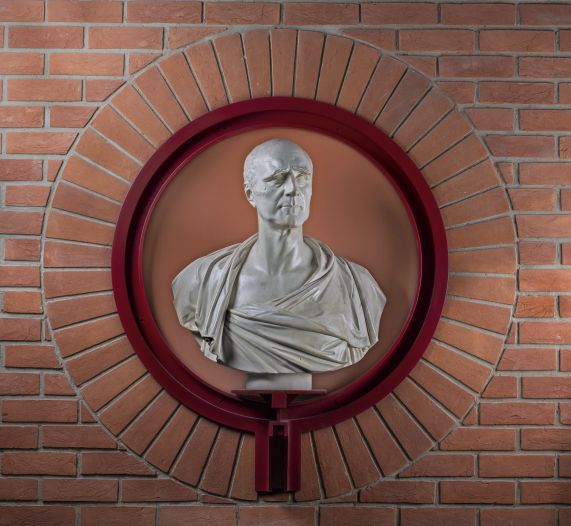 Thomas Grenville was a politician, diplomat and bibliophile from an elite landowning family. As a younger son, he did not succeed to the family estates and most of his income came from public service. Grenville was the First Lord of the Admiralty within the government led by his younger brother, Lord Grenville, which among its reforming Acts passed the Abolition of the Slave Trade Act in 1807. Despite this new law, slavery remained legal in British colonies until 1833 (and in some British-controlled territories until 1843) and the imperial elite continued to profit from the labour of enslaved people. Hans Sloane was born in Ulster, in the north of Ireland, and trained as a physician. An avid collector from an early age, he acquired over 200,000 plant and animal specimens, 71,000 objects, and over 50,000 books, manuscripts, prints and drawings. These later became the foundation collection of the British Museum.

Sloane travelled to Jamaica in 1687 as physician to the island’s British colonial Governor and worked as a doctor on slave plantations. Using the expertise of enslaved West Africans and English planters, he collected hundreds of plant and animal specimens. When he returned to London, Sloane married Elizabeth Langley Rose, an heiress to sugar plantations in Jamaica. He was a shareholder in the Royal African and South Sea Companies, both of which profited from the slave trade. His medical income, his investments, and the profits from the forced labour on his wife’s plantations enabled Sloane to build such a large collection.

It is too often said that the transatlantic slave trade is long behind us. An untold number of our ancestors’ lives were completely ruined by men like Hans Sloane. Every one of their waking moments filled with violent abuse, torture, unpaid manual labour, rape and treatment as if less than human. That pain and trauma is still with us as we fight to make a world that is truly anti-racist. We cannot allow the glorification of enslavers and their legacies to continue through succeeding generations. We must remember these men for who they truly were, for their crimes as well as their accomplishments.

Posted by Ben Sanderson at 1:16 PM