Unfinished Business in libraries across the UK

For the past three years the British Library and public libraries in the Living Knowledge Network – a UK-wide partnership of national and public libraries – have collaborated on exhibitions. This year we were thrilled to be working on Unfinished Business: The Fight for Women’s Rights, with 26 pop-up exhibitions taking place in physical library buildings.

Over the challenges of the last few months, libraries across the UK have demonstrated they are still open and active, despite the lockdown measures restricting their services and physical spaces. Many libraries have continued to offer book lending services via click and collect, have supported the Covid response of their local council and continued to programme online events and activities. While it was initially daunting to think about how libraries could continue the UK-wide exhibition, they have shown incredible innovation and versatility in not only keeping it alive, but injecting new vitality into it.

It has been inspiring to see how libraries have continued to celebrate and explore the themes of the Unfinished Business exhibition in the digital sphere, which has been creatively brought to life in 26 libraries across the UK, from Exeter to Aberdeen, Norfolk to Sheffield. Public libraries have programmed a wide range of events, including in-conversation discussions with local historians and activists, creative workshops, themed book groups and author talks. Through their events, libraries have surfaced the lives and achievements of many unsung local pioneers who have played a huge role in advancing the fight for women’s rights.

Particular highlights have included Suffolk libraries’ programme of talks exploring broad themes of the exhibition. Still to come: Exeter Library will be hosting the acclaimed poet Tolu Agbelusi as writer-in-residence during the months of February and March, who will be running a series of exciting interactive events, all with a focus of exploring the stories of Exeter’s women. Workshops have also proved popular for younger audiences across the Network, including a Zine Workshop led by Cherry Styles from Salford Zine Library hosted by library staff from Kirklees.

Libraries have also responded by creating virtual exhibitions, including Norfolk Library’s fascinating exploration of women who were at the forefront of the Women’s Liberation Movement in the 1970s and 80s, showing how they connected to national and international feminist campaigns. The exhibition also unveils the stories behind Rosie’s Plaques, the handmade unofficial blue plaques celebrating local historic women who appeared on the streets of Norwich in 2019, and includes a Norfolk Women of History hall of fame, shining a light on the little-known, but incredibly important narratives behind the fight for equality of opportunity. 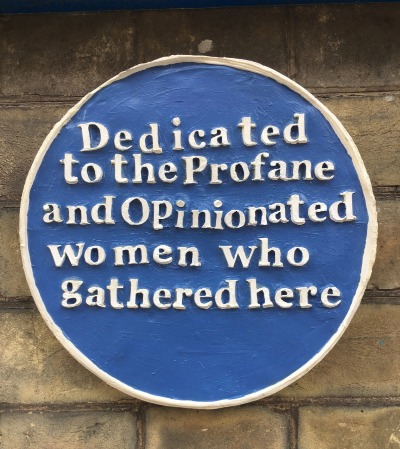 A digital showcase has also been created by Warwickshire Libraries illuminating the stories of the area’s suffragette movement, reflecting on the experiences of Warwickshire women in WWII through the Land Army and highlighting the life stories of novelist George Eliot and botanist, Dorothy Adlington Cadbury. Additionally, Leeds Libraries have created a virtual tour of items from their special collections, which help illustrate the accomplishments of inspirational local women from the past and present via the themes of mind, body and voice.

To complement the work of libraries, events from the British Library have also been live streamed throughout the period while libraries have been unable to fully open, bringing live events featuring the likes of Dolly Parton and Gloria Steinem to people’s homes via a freely accessible archive.

Last week the Network hit a milestone, with the first co-produced Unfinished Business event going live. ‘On this Day She: Putting Women Back into History One Day at a Time’ was a collaboration by the British Library, Warwickshire County Council and the West Midlands Readers' Network. The recording is now available to watch again. Join authors Jo Bell, Tania Hershman, Ailsa Holland and Imogen Church as they discuss the forgotten women of history and their place in the national story for the fight for equality.