An interview with Antony Gormley

The open space to the front of the St Pancras British Library building, known as the Piazza, is home to a number of artworks by seminal British artists, including two by sculptor Antony Gormley. 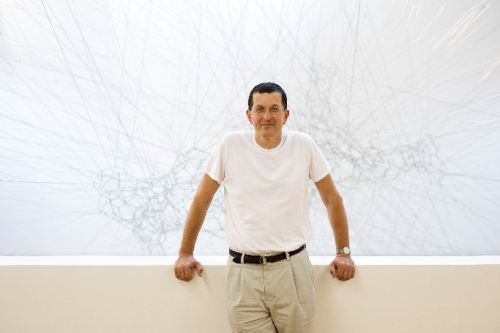 Sir Antony Gormley, OBE, is a British sculptor best known for the Angel of the North. Jo in our Digital Engagement team spoke to him about his love of the British Library and the inspiration behind Planets and Witness, his works at our St Pancras site.

'The magic of the British Library is the way its utilitarian reserve is countered by the great battery of leatherbound books at its core. I love the idea that what is visible above ground is a small part of that which is buried below it.'

Tell us about yourself and your work

I live in a way in which work and play, if not synonymous, are woven into one another.

I like to work alone and I also like to work in company. I like to have many pots simmering. When I started, I made work on my own or with Vicken Parsons, who became my wife.

Increasingly, I began to work with others, and this became normal after the building of the studio in King’s Cross. 25 assistants work with me in London and 20 in Hexham. There is an organic culture in studio life. I really love this creative community, drawn together through the work we make together and I’m proud to say that without them, I now couldn’t do much.

All the work comes from me – literally me – standing naked in a darkened room, being scanned, or asking somebody to translate a small drawing from my Muji notebook, but the life of the studio is actually a place of collaboration and critique: a work passes through my hands and eyes as well as others, before leaving. I love the sense of things literally bubbling up out of the interaction with people, and of people with stuff.

My work comes out of life – and life, hopefully, is the receiver of it. Each work is the mother of the next work. I want to make art that is about awareness, alertness, aliveness and hopefully, it can produce those affects in those who experience it.

How did your work with the British Library come about?

I became involved with the Library through the competition for Poet's Circle. Through it I came to know and become friends with Sandy Wilson [the architect of our building in St Pancras]. He was an amazing and charming person, ever young, always seeking new inspiration and new ideas. He was open minded, grand, yet friendly. 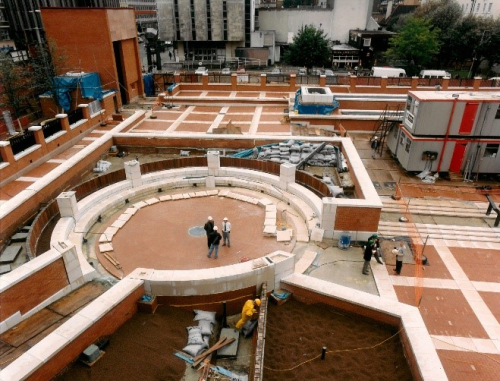 I still think that the magic of the British Library is the way its utilitarian reserve is countered by the great battery of leatherbound books at its core, and the extraordinary volume and silence of the Reading Rooms. I love the idea that what is visible above ground is a small part of that which is buried below it. We now have the entire history of human knowledge accessible in the Cloud, but the British Library is a necessary objective correlative.

The Library materialises the sedimentation of knowledge. It is precious, as all libraries are precious. The decision to move the library from the round Reading Room of the British Museum to St Pancras, was important. It represented our wish for cultural continuity and evolution.

The British Library is privileged to have two of your works on display at our St Pancras site. Tell us about them.

I was very honoured to be asked to make a permanent work for the courtyard. I tried to complement its concentration on the word by celebrating something about human touch and our dependency on the palpable, material world. It was an adventure to find the eight granite stones formed through Pleistocene glaciations and a joy to see them embraced by living bodies as an acknowledgement of the Anthropocene. Planets was the result. 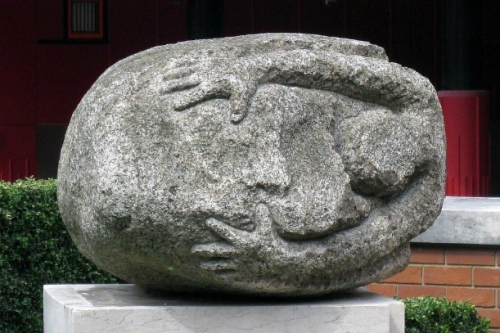 Close up of Planets by Antony Gormley 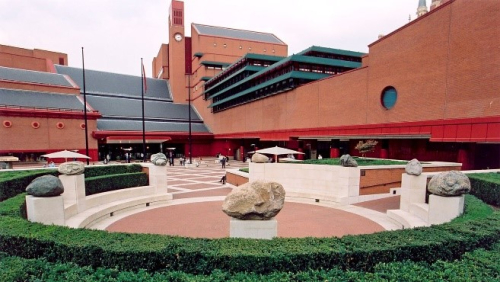 Planets by Antony Gormley at the British Library

A few years later, it was wonderful to be asked to make a work in acknowledgement of the brave writers who have witnessed political injustice and who had themselves suffered for speaking truth to power. Witness (commissioned by English PEN to mark their 90th anniversary) is an invitation for us to think of those who fight for freedom of speech and therefore put themselves at risk. I think of it as a solid foundation for the act of witness. A place to be silent and still. 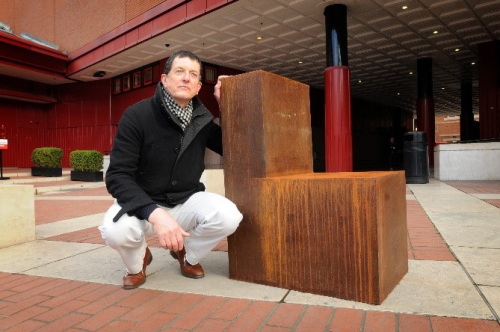 Antony Gormley with his work Witness at the British Library

Working in pandemic conditions since March 2020 has been difficult but rewarding. The ever-present deadlines for exhibitions have now been replaced by an ability to evolve and interrogate the work while living with it. There is time to listen to what the work wants us to do. We have been evolving forms that chart the body as space and evolving proposals that will invite viewers to be participants in the in animation of space.

Antony’s studio currently have their collective fingers crossed that nothing will now come between them and exhibition openings at the National Gallery of Singapore and Schauwerk Sindelfingen this summer.

And finally, what do you love about libraries?

Libraries are special places. Their atmosphere is made by the feeling of readers connecting with the insights and research of other minds from other times and places and making something new out of them.

It's been a long time since I enjoyed this feeling of doing research at university libraries in Cambridge and London: combing through the card files, identifying the books that I needed, which would then arrive at my work desk and create that special campsite of books around me that helped to make an idea, a proposition, a way of interpreting.

Find out more about Planets

Find out more about Witness

In 2002, the British Library commissioned the now Poet Laureate, Simon Armitage, to write a poem to mark the unveiling of Antony Gormley's sculpture, Planets.

For comparison’s sake, imagine these rocks
as ova thrown from the core, as the eggs

of the Earth, rolled and revolved by time,
nagged at by air then suspended in ice

and shunted westwards in the general flow
at the pace of knowledge – glacially slow.

the Library doors. So exit the vault
of gilded words, leave the bullion of rare thoughts

and enter the dial of privacy,
the captured orbit of privet and brick

where the eight eggs of the Earth fetched up
after billions of hours, each one now etched

with a halfway-visible human form.
And yet these bodies are neither hatched nor born;

look closely – they seem to be clinging on
with gecko fingers and toes, or climbing in –

shouldering, burrowing, tunnelling through
to the inside, showing the way, as though

by doing the same we might follow them home.
They circle us, turning our minds to stone.