True Echoes is a research project centred on the British Library’s Oceanic wax cylinder collections, led by Isobel Clouter of the World and Traditional Music section.  These wax cylinders (an early medium for recording and reproducing sound) were recorded by British anthropologists in the late 19th and early 20th centuries in Australia, Papua New Guinea, Solomon Islands, Vanuatu, and New Caledonia. They represent some of the earliest recordings of Oceanic oral traditions, and include music, stories, speeches and many different types of songs, including hunting songs, hymns, funeral dirges and lullabies. They are a unique representation of the cultural histories of the people of this region. 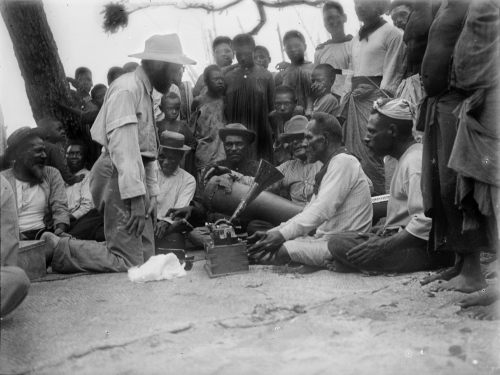 The project’s aims are twofold: to increase the recordings’ visibility and accessibility for people living in the areas in which they were made, and to enhance understanding of the collection through local knowledge and cultural memory in partnership with seven Oceanic cultural institutions.

For the Papua New Guinea collections, Research Fellow Vicky Barnecutt has been working closely with Don Niles, Acting Director of the Institute of Papua New Guinea Studies, on the historical research. They liaised with other researchers and institutions, and gathered all the information they could find about the recordings, the recording contexts, and the subsequent histories of the cylinders. They have created comprehensive research documents, including photographs, maps and metadata, to be used as a basis for the planned participatory research.

Due to the current restrictions on international travel, this research is taking place online. Research Fellow Rebekah Hayes has co-ordinated the launch of the project’s website, true-echoes.com, which will share the project’s research findings. Originally planned for the end of the project, its creation was brought forward so that it can act as a valuable tool during participatory research. So far, one collection has been made publically available on the website.  You can find out more at true-echoes.com and on the Sound and Vision blog.

True Echoes is funded by the Leverhulme Trust and the UK Government’s Department for Business, Energy and Industrial Strategy (BEIS).