Behind the Scenes: Vaccine volunteers

Finding you just the book you need. Restoring a 500-year-old manuscript. Welcoming you to your new favourite exhibition. Our staff do some amazing things. And some have been volunteering their time to do even more: meet some of the British Library team helping to save lives and move us out of the pandemic.

The British Library building in St Pancras sits next to what is affectionately known as the Crick: the Francis Crick Institute for biomedical research. Scientists and staff across the Crick have set aside their normal work to volunteer expertise and facilities to respond to the COVID-19 pandemic and, since January 2021, 55 British Library staff have been volunteering at the on-site vaccination centre.

From registering arrivals to administering the actual jabs, each five-hour shift helps deliver the Oxford Astra Zeneca vaccine to up to 800 people a day.

Elizabeth, who manages commercial hire events at the Library, has transferred her organisational skills to co-ordinating the Library’s volunteers: ‘This has been an amazing opportunity for us to be doing something really worthwhile to help the battle of Covid! I was delighted to have been asked to help co-ordinate this – but the real stars are our volunteers who were so enthusiastic in their response. It has been a real privilege to be involved.’

The vaccination clinic is run by Middlesex University and UCLH, with volunteers from other organisations, including the Royal Free Hospital and Kings College London University, and Library staff have appreciated the opportunity to meet people working on the front line of the pandemic. 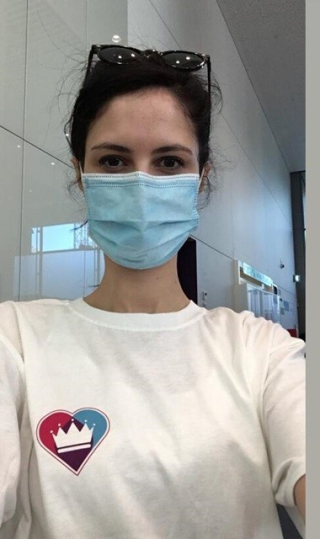 ‘On my first shift I worked alongside people from the Francis Crick Institute and the Wellcome Trust – they’d been at the forefront of the Covid-19 vaccine work, so it was amazing to hear some of their stories,’ says Blerina, part of the team that manages the Library’s relationship with Government and Parliament, and co-lead of the Library’s climate change campaign.

For Dede, from our Visitor Experience team, ‘the best bit has been seeing the centre register and vaccinate more than 30 homeless people a day.’ 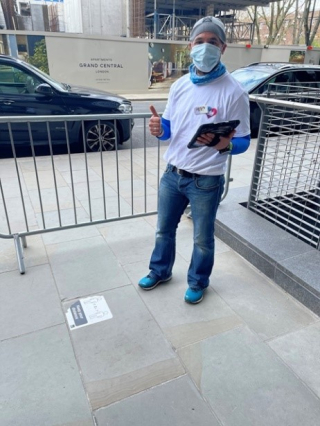 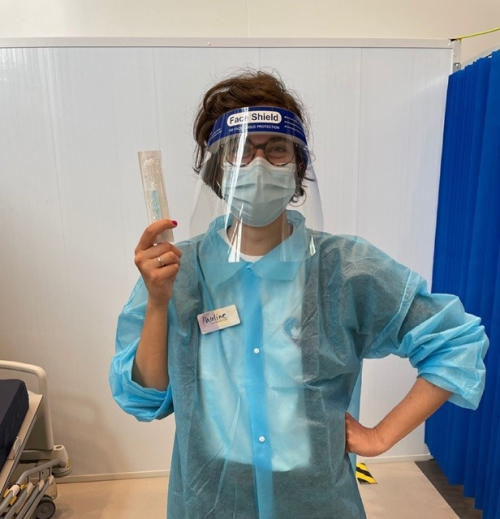 Pauline, one of our Visitor Experience Assistants, has been volunteering once a week and recently became a vaccinator. 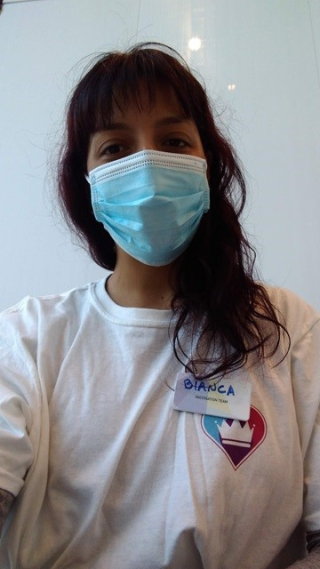 Bianca works on a project cataloguing the Library’s huge collection of maps, cartographic books and atlases. She chose to volunteer because ‘helping other families made me feel like if I was helping my family in Brazil, sharing the load with my uncle who is a doctor and has been working as much as he can, helping create a safe environment for my brother to be a proper teenager. It felt like if people help everywhere, nobody needs to be left behind.’

Veronica is a book conservator, helping to care for and preserve the Library’s collection and enable continued access to it for researchers. Like Bianca, she had thoughts of her home country in mind when she signed up to volunteer: ‘My birthplace in north Italy was the epicentre of the first Covid-19 outbreak in February 2020. It felt important to try and do something. The Library gave me this great opportunity to help many people to get vaccinated and seeing their family again, so I seized it.’ 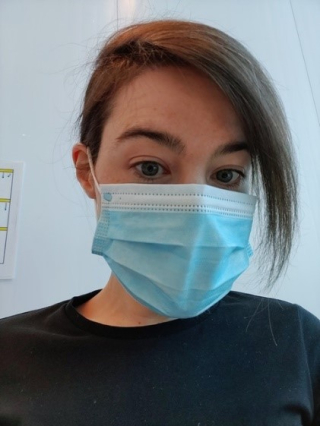 Rosie works in our Sound Archive, clearing copyright on sound recordings and assessing them for sensitive material, as part of the Unlocking our Sound Heritage project, which aims to digitally preserve and improve access to audio archived at the British Library and around the UK. She volunteers at the Crick in administration and marshal roles. ‘The element I love the most is being part of history, and this wonderful effort to drive the vaccination programme. I have felt quite helpless and overwhelmed by the situation we are living though, and this helps me feel like I’m doing something to counteract the difficulties people have or are facing.

‘It gives a great insight into the work of the NHS and the scientific experts in these tumultuous times. I’m proud to be supporting them in some small way.’

The British Library has a growing culture and learning programme in the Leeds region, which is home to the Library’s site at Boston Spa near Wetherby, writes Kenn Taylor, Lead Culture Producer for the Library’s northern programme.

During the Covid-19 lockdowns, this programme continued to develop, including this online participatory project developed with the Kushy Dil community group in Beeston, Leeds, which took place between March and May 2021. As an output of the project, the group have written this guest blog, exploring the ways they were able to use the Library’s online resources, and a range of other sources, to research the history of their local community:

We are Kushy Dil (Happy Heart) Women’s Group, based in Beeston, South Leeds. Pre-lockdown we used to get together weekly to take part in exercise, healthy eating, art sessions and above all having a cuppa and a laugh! However, as the pandemic stopped us from meeting up, we got together online. During this time we had the privilege of taking part in a community research project with the British Library. Our journey of discovery was fascinating, intriguing, and fun.

We started researching about our community through the British Library platforms. We all had different areas of interest from local schools to our fathers’ workplaces. We shared, discussed, and reflected each week on what we found. We found funny stories and fascinating facts but above all worked together. The culmination of the 6-weeks resulted in us writing this blog we hope everyone will enjoy reading. 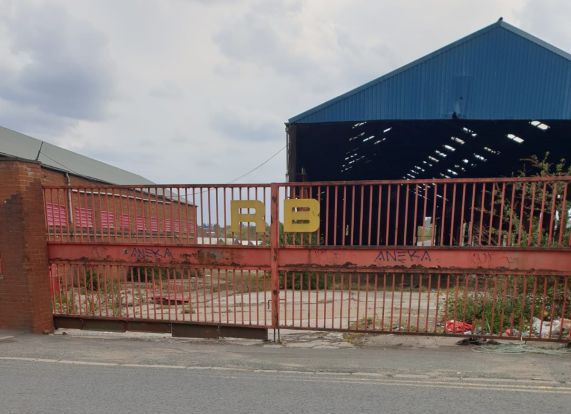 A recent photo of the former Robinson and Birdsell factory. 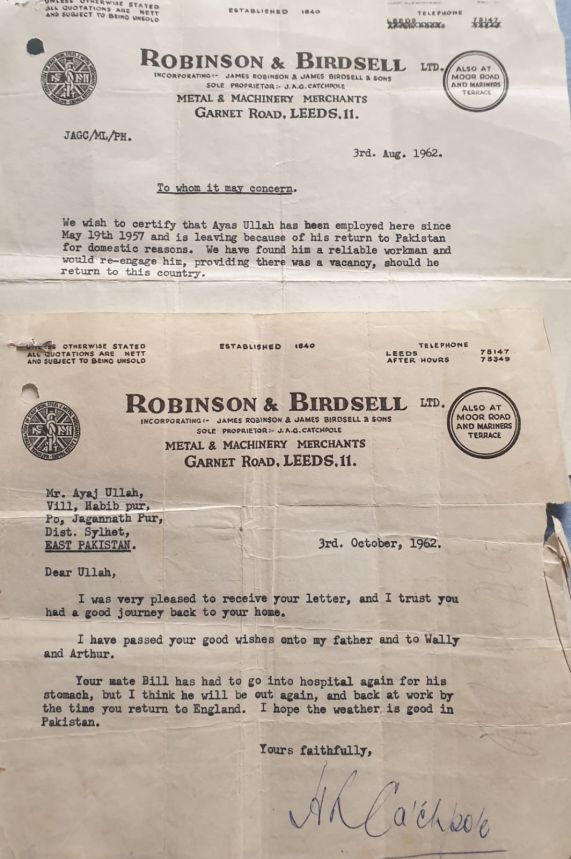 Letters from the Robinson and Birdsell factory relating to Sarful's father.

In the British Library archives, I found information on the houses we lived in. I enjoyed researching on people in the past living at our addresses. I was intrigued to find out that you could buy a house and shop on Tempest Road for £55 in 1906 and in 1941 a lady called Miss Clare Wilson lived on Tempest Road and won a crossword competition.”

Looking at houses was a popular choice with Ambia also exploring them: “I chose the topic of houses because my father was one of the first Bangladeshi people to buy a house in Beeston. The house my father bought is still our family home. I found in the British Library archive that my current house on Stratford Terrace used coal mines and to this day I still have the door to where they kept all the coal in my cellar. I found it interesting that in the 1800s the houses that I have lived in were not built on the maps that we had access to. It was built on open land. 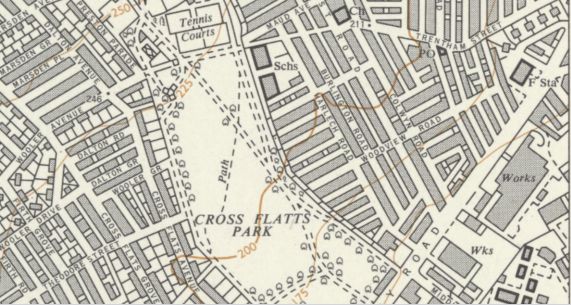 The same area of Beeston, depicted in a 1968 map.
I enjoyed looking up different articles about Leeds and reading them as I found them to be very interesting and I liked looking at how differently they were written back in them days.”

Salma meanwhile: “wanted to research on: Harlech Terrace (my street), Mosques of Beeston and Cross Flatts Park. For all three topics I used British Library maps, newspaper archives and information from the internet. In the olden days there used to be house mosques. There was a house on Rowland terrace called shah Kamal-Jamie-masjid. On Stratford Street there was a house mosque called masjid Umar which still exists but is vacant now. They expanded this masjid and built what is now known as ‘Masjid Ibrahim’. Kashmir Mosque Welfare Association was one of the first mosques in Beeston. It transformed into Abu Huraira masjid.

I also found some interesting information about Women’s Liberation Movement and female rights in the 1980s.”

Amelia really enjoyed the online talk with the British Library Reader Services staff. “Nicola been showing us how to search for maps and Stewart Gillies talks about the News Collection of British Library. It is amazing thousands of newspaper titles.”

Amelia was interested in her local children’s school: “I chose to research on Beeston Hill St. Luke’s Primary School as all my three children went to this school. Summer 2021 my youngest is going to finish his primary education. It is always an emotional time for me as a parent to sit in the school hall and watch the leavers’ assembly. I found some interesting photos and facts about the school including stories in the newspaper archive about fundraising for it. The way to collect donations through giving a concert goes back a long way. It is good to know the attendance was large but would be interesting to find out the total amount collected.” 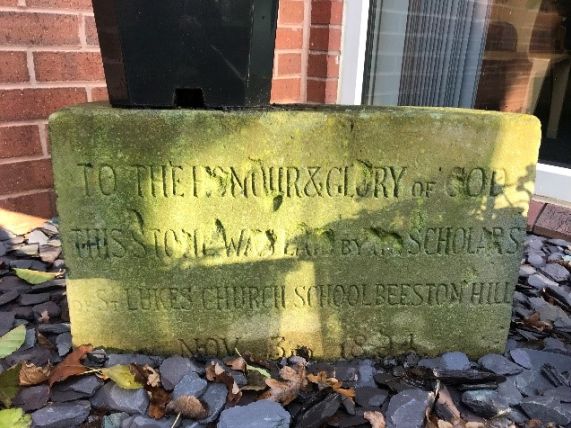 A recent photo of the foundation stone of St Luke's Primary School, Beeston.

Sarful beautifully said how everyone felt about this project in the group. “I enjoyed doing this as a group. Kushy Dil is a well-established Bangladeshi Women’s group in Beeston. We all have similar interests and come from similar backgrounds. We also know each other’s strengths and weaknesses, and I feel this played a big part in us achieving this amazing piece of work.”

Posted by Ben Sanderson at 9:03 AM

In this blog series we profile some of the independent creative businesses behind some of our product ranges in the British Library Shop (both online and at our St Pancras, London site). This time, we meet Cécile from Here. Design, who worked on the bespoke product range and catalogue for the Unfinished Business: The Fight for Women’s Rights exhibition. 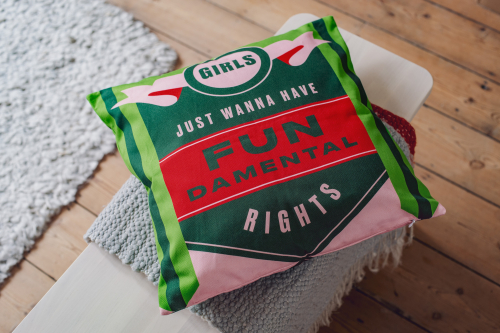 Founded in 2005, Here. is ‘a company of thinkers, writers, designers, and makers who work together to create beautiful and useful things’. They are based in an East London studio, but Covid-19 has allowed them to rethink the way they work, enabling designers to work wherever they feel most inspired as individuals and as part of a team.

Here. worked with the British Library Publishing team on the Unfinished Business catalogue design, which then inspired the range of bespoke products for the shop, drawing on key themes of the exhibition, as Cécile explains:

‘Our design is inspired by the women’s suffrage banners to give a sense of empowerment to the younger generation via the products. All of the products in the range were designed to be worn and worn with pride.’ 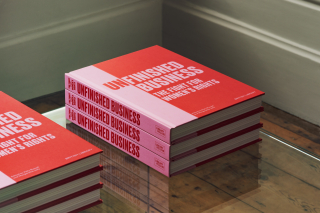 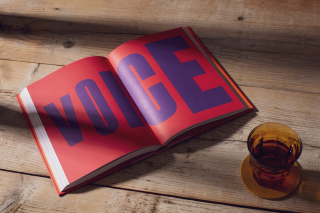 The range combines bold colours with strong messaging, across flags, prints and cushions for the home, and t-shirts, bags, patches and more to wear your message with pride. Stand-out pieces include the ‘Girls Just Wanna Have FUNdamental Rights’ Cushion, and the ‘A Woman of Words is a Powerful Woman’ recycled leather notebook. Cécile’s favourite item is ‘the enamel pin ‘Change the Agender’ which I wear every day on my jacket’.

‘The product design with its focus on bold typography and inspiring messaging, is powerfully uplifting. Although beautiful objects in their own right, each has a positive purpose. We found inspiration in the imagination and persuasive language of women fighting to have their voices heard.’ 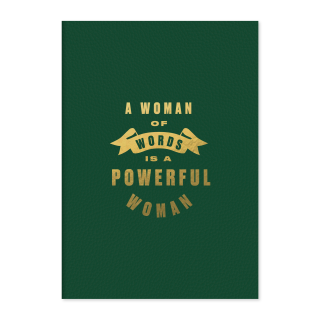 The bespoke range sits alongside books exploring the issues of the exhibition in more detail, and is complemented by branded items such as jewellery from Tatty Devine which supports the Fawcett Society. There are also 6 prints produced in collaboration with activist organisations who contributed to the exhibition. 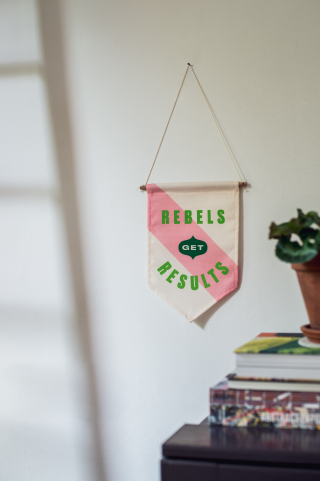 Cécile’s own advice for anyone starting out in design?

‘Have a voice! Your opinion and point of view are as important as someone who has been working in design for 20 years.’

Unfinished Business is open until Sunday 1 August and entry is free on Tuesdays. Click here to find out more.