Shazia Haya Ahmadzai is an Afghan journalist for the BBC’s Pashto service, who recently escaped from Kabul following its takeover by the Taliban. Shazia met our events producer Bee Rowlatt through a mutual colleague from BBC World Service, on the day she arrived in the UK from Kabul.

Bee invited Shazia to share her extraordinary experiences at the British Library, where she now has Membership and where she is speaking on Saturday 18 September as part of Jaipur Literature Festival’s one-day session for JLF London. 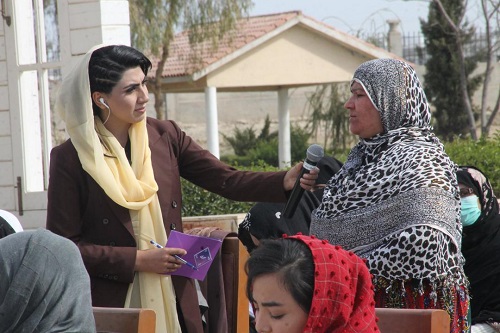 Bee Rowlatt, British Library: Shazia, we are all very excited to welcome you on site, and now that you’re a British Library Member we hope to see you here regularly!

Shazia Haya Ahmadzai: I never imagined that one day I would be in the British Library. In Kabul there are no well-equipped libraries, that is why I did not go to the library in my lifetime. I just saw big libraries in movies, but you know books are the only things that bring me peace. I would like to spend my whole life reading books. I have heard about the British Library which is known all over the world and I even googled it, but I never imagined that one day I would be here. I hope it will bring me some peace and some community after what has happened.

Bee: Tell us about the last month

Shazia: Last month a storm came and destroyed everything, it destroyed life, dreams, and families. I reported the fall of the majority of the provinces. When Kabul fell and I saw insurgents on the roads, it was a dreadful moment. The next day, insurgents surrounded the building where I lived. The owner of the building came and told me that I should hide. I hid my work ID card in case the insurgents searched me. I cannot explain how scared I was, how my body shivered. I cannot forget those three or four nights that I did not sleep, that I hid in the kitchen.

On 21 August at 10pm I received a call and email that I should go to the airport. At 11pm I left my family alone, wore a burqa in the taxi and went to the airport entrance door which was closed by the insurgents. I begged an insurgent to let me in but he cursed me and shouted ‘go home or I will beat you!’ Finally, after an hour of walking along the side roads, I reached the entrance to Baron camp. I entered the camp by the same side road where a suicide bomber struck a few days later. I spent two nights and three days with a hungry stomach there but I am not complaining of those days in camp. It was the safest place for me. 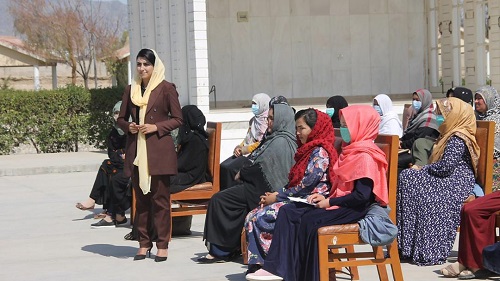 Bee: And now that you are in the UK the hope is that you can carry on your work. How did you become a journalist in the first place?

Shazia: It was my dream to become a journalist but I grew up in a conservative family. A girl in my family couldn't appear on the screen, it was taboo. My brothers, uncles and father mentally tortured me and bullied me to quit my job. From the day I started as a journalist, I fought with family and with society for my rights. My father used to tell me, ‘do not tell anyone that you are my daughter because your work is a big shame for me’. Only my mother and my older sister supported me. That's why today I want to say that I, Shazia Haya, am the daughter of MY mother Zaibul Nesa and I am proud of it. No girl should experience the tough life which I did. But I started work with local media as a news presenter and after one year I got a job as a presenter of news talk shows, then I joined the BBC in 2019 as a reporter. In 2020 I was promoted to the senior team journalist of BBC Pashto TV. I want to share stories. I lived in a country where the people's voices could not be heard, especially women’s voices. I wanted to show that Afghan people's lives matter.

Bee: Talking of sharing people’s stories, what will you be talking about at JLF London on Saturday?

Shazia: I want to raise my voice this time. It is the first time I’m going to be speaking about myself, which is also the life of every Afghan girl and woman. As a journalist, I raise other people’s voices but now in the British Library, I will raise my own. I want to tell the world how much it hurts when in a minute, life, hopes, dreams are destroyed! I want to ask the world, do I or any Afghan girl deserve that miserable life? 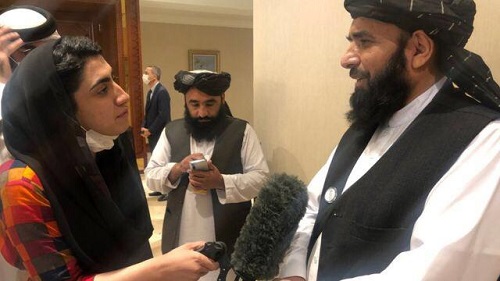 Bee: What are your hopes for your future?

I want to study and work because for these two rights I fought hard. I want to be a human rights activist in the future and help others, as today others are helping me! The day I arrived in Britain, I was given a new life. I am grateful to the British government for this gift.

Shazia Haya Ahmadzai will be taking part in Afghanistan: The Unravelling, a special event at the British Library as part of JLF London at 13.30–14.30, Saturday 18 September, with Saad Mohseni and Rory Stewart, in conversation with William Dalrymple. Tickets may be booked either to attend in person, or to watch on our platform (online) either live or within 48 hours on catch up.