Our top 10 most unusual collection items

We’re more than Magna Carta and Beowulf. Dig deep within our archives you’ll find some rather unusual and unexpected objects – from talking stamps to the Edwardian equivalent of today’s Sat Nav.

We asked our curators and librarians to tell us the most curious items they’ve encountered in our collections. Take a deep breath as we plunge inside our cabinet of curiosities...

Presenting the Library’s only ocean-going vessel!

St Kilda is a now-uninhabited small island group some 50 miles west of the Outer Hebrides in Scotland. This ‘mail boat’ was used in the transport of mail from Hirta, the main island, between 1876 and 1930. Letters were placed in the wooden boat in a protective canister, together with a request for the finder to post the mail to its destination.

It was then sealed with pitch and launched into the sea, with the sheep’s bladder acting as a float. More often than not, the North Atlantic drift would carry it to the Scottish mainland, the Outer Hebrides or sometimes even Norway.

The first mail boat was sent out as a distress signal in 1876 and the method continued to be used until the inhabitants were evacuated from the islands in 1930.

These 17th-century gloves, belonging to diarist John Evelyn (1620–1706), were said to be gifted by Peter the Great, Tsar of Russia (1672–1725) as a token of apology for leaving his house and grounds in rather a state after a visit.

Legend has it that while a tenant at Evelyn’s London property Sayes Court, Deptford in 1698, the Tsar engaged in antics ranging from destructive wheelbarrow races through the immaculately-landscaped gardens, to using paintings for target practice and furniture for firewood.

Unfortunately, the story behind the gifting of these gloves has never been corroborated with evidence, and so continues to remain speculation.

This collection of horse hooves and shoes comes from a book of lectures on farriery published in 1793. The lectures – by the first professor of the New Veterinary College of London, Charles Vial de Sainbel – deal with how to build horse shoes for different types of hooves.

Containing six plaster casts of hooves of varying sizes, together with six brass horse shoes, the set was designed for students to practice the teachings of the lectures. The work was one of the 65,000 printed books collected by George III for his collection, currently housed in the King’s Tower.

The ‘Micro Motor Map’ – a forerunner to today’s GPS – was an ingenious attempt to solve the Edwardian motorist’s problem of how to drive and read a map at the same time. A reduced-size road map was carried on a set of 14 slides, each of which could be inserted into a hand-held viewing frame. This was held up to the light while driving – though presumably not at the top speeds of 60 mph that some cars then could travel.

This board game is an actual London Underground map from 1908, which has been pasted onto card. Players pick tickets telling them where they need to begin and end their journeys, and the fare to pay (no more than a penny or two). Landing on (and remembering to call out) ‘All change!’ entitles a lucky winner to the contents of the booking hall.

1908 was also the year that London hosted the Franco-British Exhibition and its first Olympics, so this game is likely to have been a hit with both locals and tourists alike. 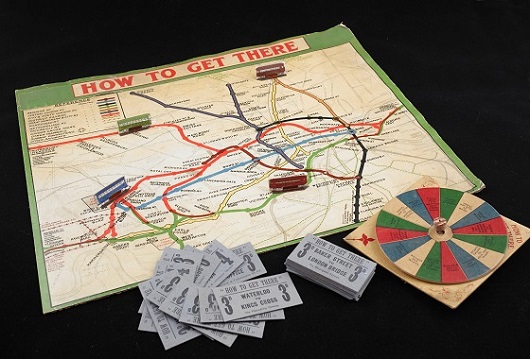 Percy Bysshe Shelley was just 29 when he tragically drowned after his boat was caught in a storm in 1822.

In what can be described as a sort of memento of mourning, this book gathers together the letters and documents that describe his demise and the afterlife of his remains. Contained within the front lining of the book is a lock of his hair, believed to be cut following his death, together with a lock of hair from his widow Mary Shelley. 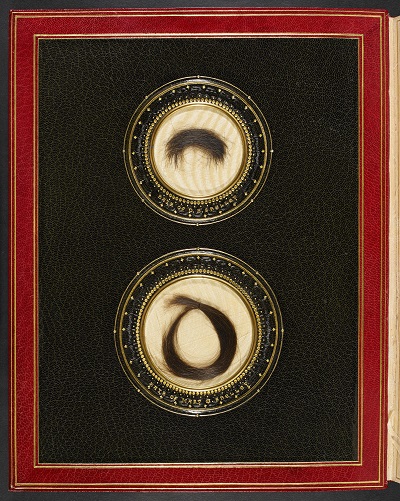 The rear lining of the same book contains material said to be from the ashes of Percy collected from his site of cremation.

Perhaps an oddity today – although in the death-obsessed Victorian age, this is unlikely to have raised an eyebrow.

'Accept advice from someone wise, it is not right to believe every friend of yours.’ This is the Greek maxim that a teacher from Egypt, almost 2 millennia ago, instructs a pupil to copy out into their wax tablets as homework. The student however, is unlikely to have received top marks as he makes a series of disastrous errors, including missing out the first letter, as this video explains.

Fast forwarding in time, this 17th-century schoolbook contains the doodles of its young owners, including one Hannah Barrow who scrawled her name on as many of the blank pages as she could find. That’s one way to procrastinate before the age of the smartphone!

In 1794 Jane Austen’s father gave her this portable ‘writing-box’. When open, it provides a slope on which to rest paper while writing. Its various compartments include a space for an ink pot and a lockable drawer for paper and valuables. 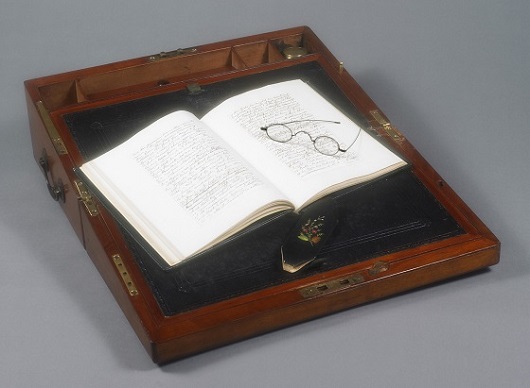 Between 1795 and 1799 Austen produced first drafts of what would later become Sense and Sensibility, Pride and Prejudice and Northanger Abbey, perhaps using this very writing desk.

Among the items that had been stored for generations in the desk drawer were three pairs of spectacles which are believed to have belonged to Austen. Optical tests were even carried out on them to determine her prescription and whether she may have developed cataracts, potentially induced by arsenic poisoning.

Over two centuries, this tuning fork passed through a succession of A-list composers. 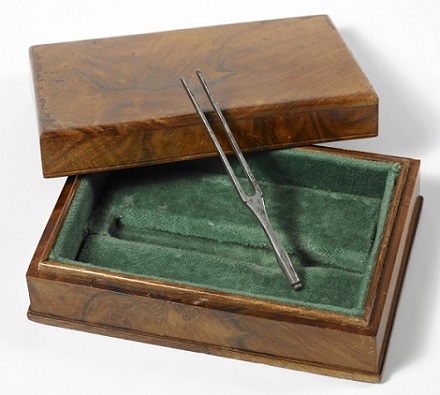 It is thought to have belonged to Beethoven until 1803. Following a promise ‘never to sell it’ but instead to hand it to ‘some decent muskier who would care for it and pass it along when the time came’, it subsequently ended up in the possession of composer Gustav Holst, who in turn passed it down to Ralph Vaughan Williams.

In 1993, Vaughan Williams’s second wife Ursula presented it to the British Library in the ‘hope that all musicians will feel that in belonging to this treasure house, it belongs to them all’. For a deeper insight into the mind of Beethoven, the British Library also holds his handwritten laundry list.

In 1973 Bhutan issued the world’s first set of ‘talking’ stamps. Each one is essentially a miniature one-sided vinyl record with gum on the back, playing material ranging from the national anthem to oral histories. 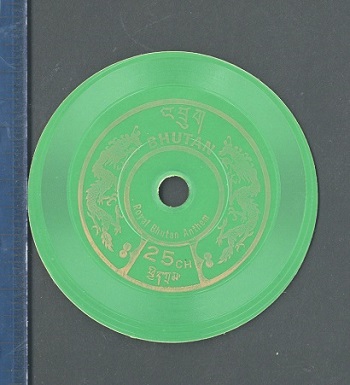 Aimed specifically at the international stamp-collecting community, they were issued to help raise funds for major infrastructure projects following the World Bank’s refusal to lend the Bhutanese Government $10 million.

Although not taken seriously by the philatelic community at the time, they are now highly sought after by stamp and vinyl collectors.

A few more of our favourites

By Elliot Sinclair, Web Editor in the Digital Team