It was wonderful to hear from a former colleague earlier this week. She always has great tales to tell and this email definitely followed that pattern. She started by telling me that she wasn’t this time asking me for a reference, but was in fact she writing to tell me that she had started a Creative Writing MLitt, something I know she has been interested for a while.

Filling her time learning the poetry of PJ Harvey, Paul Muldoon and others sounds intriguing especially when you are doing it beautiful St Andrews. One of the poets she is studying is Chrissy Williams whose pamphlet Flying into the Bear was published in 2013 and shortlisted for the Michael Marks Awards. As well as being an accomplished poet, Williams is also co-editor of the world’s first compact edible poetry magazine Poetry Digest and works on the Poetry Library's digital magazine archive, Poetry Magazines.

One poem that caught the eye of my friend that Williams had recently written is called ‘Digital Ghost Towns’, published by Soaring Penguin Press. The poem is a haunting look at the internet and the problem of archiving the web. What is even more intriguing is that it starts by mentioning the British Library’s own web archiving project.

The Library announced its plans to collect and make accessible all UK electronically published material following new legislation in 2013. Since then the Library collects well over 6.8 terabytes a month of material including the entire UK web domain and makes it accessible in our Reading Rooms in St Pancras London and Boston Spa, Yorkshire. 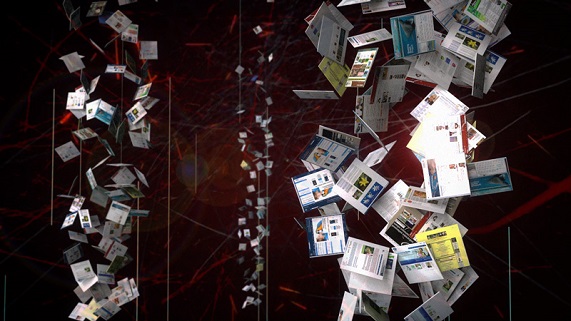 ‘Digital Ghost Towns’ captures for me the beautiful and important vision behind the need to archive the internet. The average life of a UK website is 75 days and the Library together with its legal deposit partners – the National Libraries of Scotland and Wales, the Bodleian Libraries, Cambridge University Library and Trinity College Dublin – is archiving what otherwise would have disappeared into a digital black hole.

What I love about this poem is the element of surprise I got from it. I love that someone I know thought that I’d be interested in it, but even more I love that this project is being discussed and written about in creative circles and that its long-term social, cultural and historical value is being recognised.

We don’t always get the chance to stop and think about the impact of the work the British Library and libraries as navigators of information do. Ensuring that researchers of the future will be able view what society was like 200 or 300 years’ ago by looking at this archive of digital material is reassuring, and vital if libraries are to continue to play a role in tomorrow’s world.

I forwarded you the thing about the British Library's web archiving project and you said it looked very interesting and I suddenly remembered that time I was trying to google some old poetry sites and kept seeing things like No Updates Since 1997 and how depressing it was and how somehow it was even more depressing seeing these digital ghost towns than it was for a physical magazine to simply stop making any new issues and then how the more I looked the more I realised the internet is full of dead ends and holes and the bits of it that actually work are just bright lights shining in a desert, not like Vegas because Vegas is offputting to lots of people so it's a bad analogy but I just mean that when the lights are working they're wonderful and anything abandoned especially something creative makes me sad but it's part of the process I suppose and we just have to try and avoid these holes and my god how many blogs will there even be online in 50 years' time and have we got another 2000 years of blogging coming up and shouldn't we be setting up grander projects that will last brightly forever without getting lost on the internet and just what are we playing at anyway? "Shall we put the kettle on?" I say.

By kind permission of Chrissy Williams.

I’ll be blogging about surprising happenings at the British Library and how my work and personal lives often intertwine. Hope you enjoy reading it.

Posted by Ben Sanderson at 10:46 AM in Digital scholarship | Permalink | Comments( 0)