The Beauty of Maps #2

Part two of The Beauty of Maps, aired on BBC4 last night, tackled the history of London through its most notable post-1666 maps. The three featured - William Morgan's map of 1682, John Rocque's of 1746 and Stephen Walter's 2008 effort - will all be included in the Magnificent Maps exhibition, so if you want to gaze at them for hours, be my (and the British Library's) guest!

What the programme did so skilfully was to weave the sub-plots of each map into their appearance, adding voiceovers to some really quite beautiful close-ups of details. Maps can, admittedly, be quite difficult to decipher, but if the programme taught anything, it was that to trust one's eyes and to ask 'why' a map is so elegantly drawn, 'why' a map shows a cathedral that had not yet been built, can allow for a clearer understanding of the minds and mentalities of people .

As with Monday night's programme, we had an array of speakers including Laurence Worms and Tim Bryars, two of the most knowledgeable people I know.

Incidentally, you may have noticed the footage of myself and Peter arranging Rocque's multi-sheet map of London on a table. (The whole process was speeded up on film, in fact a bit of Benny Hill-esque music wouldn't have been out of place). The assembling of the sheets wasn't as straightforward as we would have liked - I found out later that the director had rearranged the sheets in the wrong order, so that it would take us more time to complete. Watch again and, at one point, we look rather confused.

Great stuff - world domination by maps is proceeding according to plan. Look out tonight for part three on the golden age of cartography, Dutch 17th-century maps. Watch especially as we take the BIGGEST atlas in the world out of its case, and then put it back again. 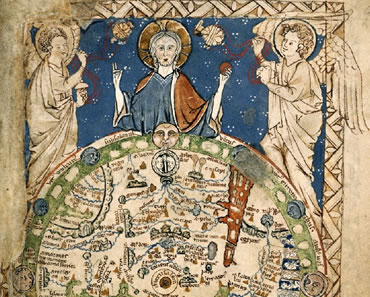 Magnificent Maps in the media

It's been a busy few months for maps in the media, as the opening of Magnificent Maps draws ever nearer.

Dovetailing very neatly with BBC4's map season, which begins this Sunday (18 April) at 21.00, the exhibition has aroused a great deal of interest - partly, I think, because of the swathes of opinion on the advances in digital mapping, but also due to a broader realisation that maps do not always speak the truth. Lots of juicy stories about propaganda, deceit and lies may be found within the borders of a map, where may also be discovered elegance and artistry.

Maps: Power, Plunder and Possesssion
episode 1 (of 3): Windows on the World

The series is hosted by the brilliant Jerry Brotton. It was great to be able to show Jerry around the British LIbrary basement areas where much of the filming for the series took place. Although he is no stranger to libraries and archives, I think he was impressed by the scale of the place, and the thousands of shelves and drawers which store the Library's 4.5 million maps.

The Beauty of Maps
episode 1 (of 4): Mapping the Medieval Mind

of which more later.

Elsewhere, you might have seen an article 'Mad about Maps' in the Sunday Telegraph, and you may also have listened to Peter Barber speaking about maps on BBC Radio Wales. For those of you who missed it, the Guardian website has a wonderful slideshow of some of the exhibits we'll be showing in Magnificent Maps.

Prepare yourselves for a double-page image in the Radio Times of 'yours truly' and Peter standing on either side of the giant Klencke Atlas, the biggest (and possibly also the heaviest) atlas in the world. Suspend your disbelief at our incredible strength for a moment... there is somebody behind the atlas holding it up.

More about the life and hectic schedule of the world's largest atlas soon.

Monday's Guardian (5 April 2010) comment pages featured a piece about maps in which our Magnificent Maps exhibition was mentioned. The article waxed lyrical about the joy of armchair-and-laptop holidaymaking made possible by the wonderful Google Maps, while referencing the recent move by
Ordnance Survey to provide free online map data, and referring to the omission of 'sensitive' information from previous OS maps.

Now, neither of these maps fall into the remit of the exhibition (since neither was produced specifically to be displayed on walls), and their messages are consequently more subjective than the bold statements made by the exhibits. But that 'maps have been used by those in power to control and to indoctrinate' is not necessarily true only of older maps. No map can (or would really try to) show everything. Mysterious Siberian black rectangles, convenient cloud cover and variances in zoom levels notwithstanding, any map will require key choices by the mapmaker, as well as interpretation by the viewer.

The Guardian is right to say that maps shouldn't blind us to the reality of what is out there. But they do try! The 90 surrogate realities in the exhibition, as you will see, are doing just that.

So you love maps do you?

The most common statement to greet my ears is 'I love maps'. Now, I do not mean that people accost me in the street and declare their love for all things cartographic. That would be odd. The declaration usually comes from people who have just been told what I do for a living. And as curator of antiquarian mapping at the British Library, my response of late has been to bid them 'prove their love is true' by coming to our exhibition Magnificent Maps: Power, Propaganda and Art, which opens on 30 April.

For those of you of the 'I dislike maps but I don't quite know why' variety, the exhibition offers the following explanation: maps are all around us, so much so that we scarcely notice that they are there. They are an integral part of our visual culture, on walls, on rooftops, as statues, in palaces, schools, homes and offices. They appeal to our pride, our sense of belonging, and our aspirations. And to do this, they employ artistic motifs, devices and meanings. In short, maps are not about geography, and nor is this exhibition. Prepare to be surprised.

As the title suggests, Magnificent Maps will be a map blockbuster, the like of which has not been seen in Britain since our enormously popular London: A Life in Maps exhibition in 2006. Around 90 of the largest, rarest, most beautiful maps ever created will be on display, many for the first time. Ranging in date from 300AD to 2008, these are display maps, intended to be placed upon walls, not in books or folded and stuffed in one's pocket. We will be showing maps on paper, vellum, parchment, silk, marble maps, tapestry maps, maps on coins and medals, art and propaganda posters. A visual delight, accompanied by a deeper exploration of our histories, societies, and visual language.

Over the coming weeks I'll be keeping you up-to-date with the preparations for the exhibition, providing interesting anecdotes about the maps and their makers, maps in interesting locations, and any other map and exhibition related gossip that lurches across my radar. I hope you'll join me in witnessing the moving of the world's largest atlas, and keep tabs on coverage of the exhibition in the national press, of which there has already been a great deal. I'll also be providing updates on the wide range of related events. Get involved!