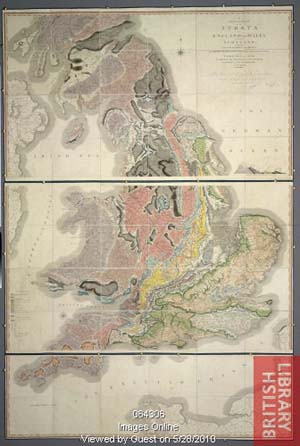 The first of our magnificent maps that didn't make the final cut is the first geological map of England and Wales, made by William Smith in 1815. One of the British Library's examples was owned by King George III. I've started with this map partly in order to quell any unrest at its non-inclusion, but also to emphasise how oh so close it was to making it.

The life work of amateur geologist William Smith (1769-1839) has been compellingly told in Simon Winchester's The Map That Changed the World (London, 2001). Smith was one of a new breed of late eighteenth-century scientists to see the earth as comprising the compressed remains of the past. The idea of a world many millions of years older than traditionally thought held big implications, both for religious denominations, and for fossil-fuel powered Britain in the early nineteenth-century. Smith's map was the first national map to express this visually by indicating different rock types and strata using colour, added by hand. These subtle shades of colour lend the map an almost accidental elegance and beauty.

Maps don't often herald change, they reflect it. Smith was one of those driven, inspired figures occasionally encountered in history, and his achievement in producing the map was immense, but he wasn't alone in pioneering the study of geology. James Hutton, for example, had published an important paper on geology in 1785, whilst Georges Cuvier and Alexandre Brongniart had already produced a geological map of the environs of Paris in 1810-11. Smith's achievements weren't properly acknowledged at the time, but perhaps they have been overstated since.

So to the reason for its non-choosing. Smith's is a wonderful map, and would have been perfect for the 'school area' of the exhibition because of its contrubution to understanding and the advancement of knowledge. Unfortunately, at over 2.5 metres tall, it was just too big for the particular part of the gallery.

And so, unlucky William Smith, the fates have conspired against you once more.

Choosing the most magnificent

Selecting 100 magnificent maps from a collection of 4.5 million wasn't easy. Would you like to know how we did it?

I shall tell you anyway.

Although Peter had been developing ideas for an exhibition of display maps arranged contextually for some time, preparations began in earnest in January 2009. We had already established the framework of spaces in which to place the maps (palace, schoolroom etc.), and had a reasonable idea of the sort of messages we wanted the maps to contain. We felt it important to consider any maps which we knew were originally displayed in these spaces (The c.1425 Cottonian map of Italy for example, which was almost certainly owned by Henry VIII and displayed in Whitehall).

We knew of specific maps in the collection which we wanted to include - The Klencke atlas, and the Desceliers world map of 1550, but we felt that other big favourites, like the 'Red-Line Map' of the United States, should not automatically be guaranteed a place. You see, we wanted to show as many objects as possible which had not been displayed before. We decided, therefore, to look at as many maps from the collections as we could, leaving no map unglimpsed. Our criteria for our searches was simple: maps needed a) to have been 'separately issued' - i.e. not published in book form, and b) be visually impressive.

Although there exist records for the British Library's maps on the Integrated Catalogue and various printed catalogues, in none of them are you likely to find information such as 'this is a really beautiful map with wonderful colour.' Library catalogues just don't work like that. So, with a clear grasp of my mission, and armed with a pad of paper and a pencil, I headed solemnly for the basement. 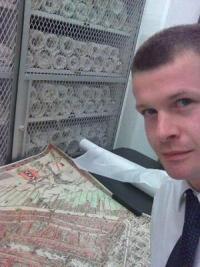 Above: in the storage area, with the tremendous Cornelis Anthoniszoon map of Amsterdam from 1544 which sadly (and somewhat unbelievably) didn't make the final cut. 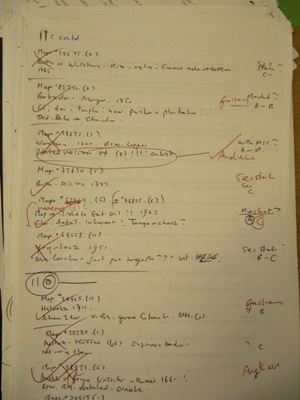 Above: These childish scribbles show the selection process in action. We graded maps A - C, A being the best.

To the 800 we also included a significant number of maps from the Manuscript collection, and a small number from the Oriental collections. We had uncovered some absolutely remarkable maps and views, many of which had not been looked at for possibly hundreds of years, but we had enough material for 8 exhibitions.

Reducing the number of maps from 800 to 100 was a long and painful process (not unlike infanticide, Peter observed, as many dear maps were to fall by the wayside). I think we chose wisely, and in accordance with the very strict requirements of the settings. But as an apology to those great maps not included, and to placate those of you whose favourites didn't make it, from next week I'll be featuring in turn the 'Ten Magnificent Maps which didn't quite make the exhibition.'

Taking my thrice daily stroll around Magnificent Maps I've needed to be nimble on my toes! Such has been the extraordinary level of interest in the show that groups of visitors gather around pretty much every map, or stand admiring the overall effect of the spaces we have recreated.

An early frontrunner for the most popular map, apart from Stephen Walter's The Island, is the hand-painted world map of 1582 by the Greek sailor Antonio Millo. It looks positively sublime when looked upon from the opposite side of the gallery, but reveals itself to be rather odd upon closer inspection. See if you can spot the sea-monster/King Charles Spaniel swimming in the Atlantic Ocean.

There have also been some very interesting and well-attended guided tours, which I am enjoying very much. I noticed Peter's tour yesterday - or at least, I noticed a throng of around 40 people with Peter's voice emanating from somewhere in the middle.

But most pleasingly there's been a great mix of visitors, and as I read somewhere in a recent article, some very articulate visitors with perceptive comments: comments I reserve the right to borrow for further guided tours should I happen to overhear them.

Alas, I'm afraid I haven't seen a visitor as appropriately dressed as I would have liked. No map-themed ties or T-shirts, and certainly no threads as special as those illustrated in Christa Weil's Fashion Preserve blog. Marvellous stuff, and don't listen to Christa: matching dress IS compulsory.

Perhaps we should have created a catwalk space in the exhibiiton. Verily I say, maps are everywhere.

In the Daily Mail, our Head of Maps Peter Barber talks about Ten of the greatest: Maps that changed the world

And in the Telegraph, Sarah Crompton gives us a personal account of her visit to the exhibition, 'At last I can see the point of maps'. Read it here

Our Press Officer tells me that we had 79 pieces on the press in April alone. I've yet to read an unfavourable review. Thanks to everyone who's been blogging and tweeting too. 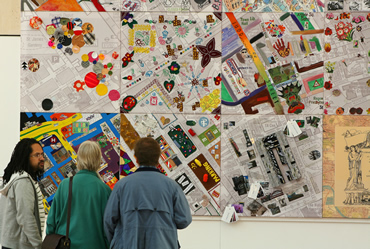 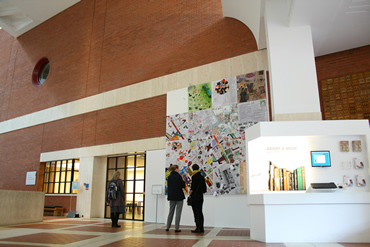 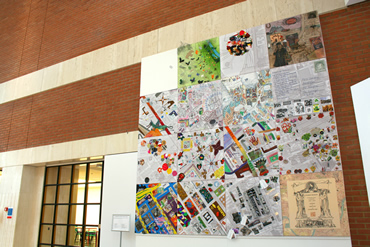 A week of map events

Last Friday's late event at the Library was suitably lively. I hope that everybody enjoyed the eclectic combo of music and maps. Unfortunately, as I discovered beginning the first of my three guided tours of the exhibition that evening, a lone voice versus a full electric ensemble is not a winnable war. Thankfully the gallery itself was rather quieter, albeit in a busy, jostly way.

50 minutes, as I found out, is not long enough to fully take in Magnificent Maps. I don't think we looked at even 20 percent of the maps. Yet the collective opulence of the settings we've created and the maps contained therein is something that can be appreciated in a fairly speedy walk-through, and so hopefully Magnificent Maps will appeal to visitors with either 15 minutes or the whole afternoon to kill. I hoarsely completed my final tour at half ten and headed for home, sleep and relatively map-less dreams.

Though I popped into the Library on Sunday, I was unable to stay for the tour of the St Pancras area by Mike Berlin of Birkbeck College, as part of the Reveal King's Cross Festival. I've heard Mike speak before, and I'm sure his energism and great knowledge will have rendered the bad weather a minor inconvenience.

Unfortunately, I shall also be missing Jerry Brotton's talk at the British Library this evening. Tomorrow very early I'll be heading over to Cornwall for a few days of recouperation, smuggling etc. And what's the betting  the hotel I'm staying at will have an old map of Cornwall hanging in the reception?

With much pomp and circumstance Magnificent Maps premiered on Thursday night. A large and suitably suited and booted audience listened while medievalist and map enthusiast Terry Jones spoke of his map experiences and declared the exhibition open, and there was much rejoicing.

The event passed in a blur of familiar faces and gracious thanks, and regret at the lack of sufficient time for either. Nevertheless, it was great to speak to those I had the chance to speak to, and to see everyone enjoying the maps and hospitality. Thanks to everyone who attended, and to colleagues for the marvellously streamlined organisation.Thanks also to the Chairman for reassuring people that the person photographed next to the Klencke Atlas in the exhibition book is not as diminutive as he might appear.

The real fun began on Friday morning at 9:30, with the doors of the PACCAR gallery thrown open for the first time. It will certainly be interesting to see which of the 100 maps draws the most attention. Will it be the well-known treasures such as Mr Klencke's atlas, or the first English globes? Or will it be lesser-known gems such as Mr Bridger's 1707 estate map of Warminghurst, or the 1693 sea chart showing cod conflict off the Canada coast? 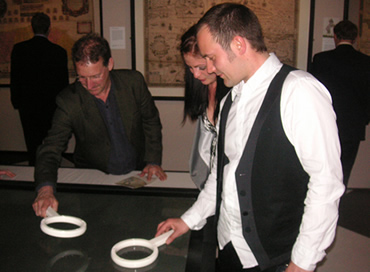 Above: Visitors, including artist Stephen Walter, enjoy the innovative zoom feature on one of the interactive screens