Augsburg was a busy, bustling city in 1521, as may be observed in the woodcut bird's-eye view currently in Magnificent Maps. The workings of this prosperous urban centre are laid out for the rest of Europe to envy and aspire to. There's only one other example of this map, in Augsburg town hall.

Now, I had been told that amongst the myriad street scenes a funeral is taking place, but it was only very recently that I located it.

... at least I think this is a funeral. One figure lies on the ground, whilst another gesticulates wildly. A group loiters nearby - the bereaved, or accessories? Looking at it more closely, perhaps this isn't a funeral after all. Perhaps I've unwittingly stumbled upon another, altogether more sinister scene of murder. Is this the criminal underbelly of sixteenth century Augsburg laid out before our eyes?

I doubt it, but fun to ponder anyway. Those of you who've seen the film Blow Up, or even Hitchcock's Rear Window, may appreciate the ambiguity, and the dangers of seeing what one is compelled to see rather than what is actually there.

Apparently one-in-thirteen people now use Facebook, which means that one-in-thirteen of us will see the world map every time we log-in (not counting those who stay permanently logged-in of course). Is this then the most familiar map in the world?

This map employs the same symbolic language as the great display maps of the past, even though it is on a computer screen. It is, on the face of it, remarkably simplified. So should we trouble ourselves as to the exact placement of the people on the map? Would it perhaps be more illuminating to focus upon the parts of the world where they are not? Is it possible to read too much into maps, even cuddly innocent looking maps like this one?

What is clear that maps are constantly relating to, acting upon, conditioning, reflecting our everyday lives, so much so that we barely notice. What we get from them, however, is always in some way made up of what we put in.

The Parish Maps project is a really wonderful idea, and I agree with Jack Kirby (comment 7th May) that in concept and appearance the King's Cross map currently on display in the British Library has a lot in common with many parish maps produced by local communities around Great Britain.

What better vessel than a map to reflect what you hold dear about your specific part of the world, its history, its future, its appearance? And displayed at the hearts of these communities. I'd argue that such maps represent the democratisation of mapmaking - 'everyone a mapmaker' - better than any digital map resource.

Also, the fact that many of these parish maps are tapestries and embroideries reminds us of the origin of maps (the word 'map' deriving from the word 'cloth').

What I really like about the King's Cross map is the contrast between the 16 adjoining sections abutting each other - in both their styles and their priorities. I like contrasts, and the complete map gives a really telling, visual patchwork effect, as well as underlining the necessary yet superficial nature of imposed boundaries. Do come and see it if you can.

One wonders what an entire 'parish' map of Britain or another country would look like - a map consisting entirely of local maps, each made by the people living in those localities. That would give us a fresh insight into how much maps can reflect reality. 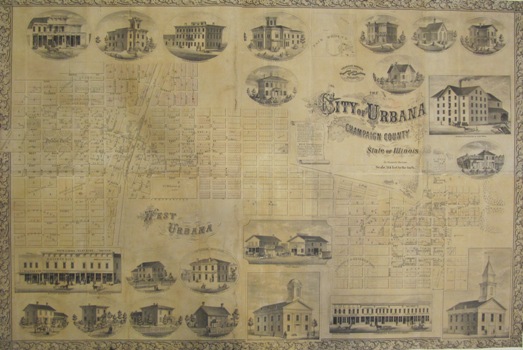 The town of Urbana, Illinois, about a hundred miles south of Chicago, may be to many (though obviously not to its residents) just an average town in the Midwestern United States, but at the middle of the nineteenth century it had big ideas and a big heart. This map, produced in around 1855, is as fine an example of civic pride as you're likely to see anywhere, and a wonderfully idealised portrait of a young town, its most notable residents, its aspirations and way of life.

Urbana was only a few decades old in 1855, but growing fast. Observe the familiar grid system of the town, with vacant plots of land just itching to be built upon. Significantly, the railroad had just reached Urbana, which promised a greater influx of new residents and trade, and communication with the wider world. The map is essentially an advert, attempting to draw in business and new residents, and it is therefore an overwhelmingly positive view of the city. Not a crisp packet litters the street.

Surrounding the town plan are images of Urbana's principal buildings: the school, the church, the post office, the bank, buildings which communicate the order and structure of the city. 'Look at us, we are the picture of civility!'  It is an idealised view that would have pleased the wealthier residents of Urbana, people who had raised the town up from the dust, and whose properties are given special prominence. Some of them can be seen talking with neighbours by their neat garden fences. Mr Alonzo Campbell esq. (or rather his gardener) maintains a wonderfully manicured lawn, whilst the building suppliers Pratt & Brother (below) are clearly doing rather well, what with all the building work around. And good luck to them I say, they've earned it. 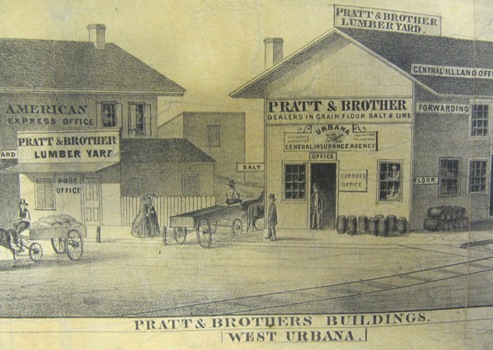 This map is all about enterprise, opportunity, and the individual, and for some reason it gives me a warm glow when I look at it and imagine what it must have been like back there and then. I'm sure that the reality was rather different, but this rose-tinted view is exactly what the map was calculated to show. A tad too self-congratulating maybe, but proof that a city is far more than simply 'the measurements of its spaces.'

This great vision of civic pride didn't make it into the exhibition, nor did the excellent manuscript map of Darlington from 1659 (BL Add.MS 64816) which shows the Quaker houses of the town. Instead we selected the first printed map of Pennsylvania of 1681-2, produced to celebrate the succss of William Penn's grand settlement project. Another great map, but I can't help feeling we missed a trick with Urbana Ilinois.

This map is one of the British Library's greatest treasures. It is a set of maps of the province of Jiangxi in south eastern China (a detail of it is illustrated above). The map has been painted with incredible colours and delicacy onto silk, which creates a mesmerising shimmering effect. Just look at the depth of those blues. The image doesn't show it, but the water has this amazing 'fish-scale' pattern effect to it.

We think that this map was intended for administrative use. It shows the historic divisions of the individual prefectures, the roads, rivers (this is a particularly wet part of China - the Yangtze river forms part of its northern boundary) and more importantly the river crossings. Towns are shown as walled settlements, with government buildings and Confucian schools afforded special prominence. Administrative, practical stuff. So why is it so beautiful?

The idea that functionality and artistry are mutually inclusive is something we've explored in the exhibition. When you think about it, maps can be both useful and beautiful. There has to be an element of artistry in a map for it to fulfil its purpose, even if it is the mere act of drawing or engraving onto a flat surface. These are artistic techniques! And do not forget that administrative maps such as the Jiangxi map would have been looked at and used by high-ranking officials, who would have demanded the highest standards of decoration, taste and beauty, even in their maps.

There are plenty of examples of these maps in the 'Secretary of State's Room' area of the exhibition, including Mark Wood's beautiful watercolour of the Hughli River in India of 1785. Even so, it would have been great to have included the Jiangxi province map in the exhibition, but the map was not made for display on a wall but to be looked at in sections on a table, thus placing it outside the remit of the show.

In fact, even if we had been able to display it, the map is over seven metres long, and short of draping it over the British Library building, we would have had some trouble squeezing it in.

May I convey my most profound sorrow and regret for this map not making it into Magnificent Maps. I do hope its non-inclusion has not offended anyone, but may its appearance here go some way to alleviating any pain that has been caused.

It will not have escaped anybody's attention that the most coveted prize of world football, the solid gold World Cup trophy, is all about the map. The globe has been crafted being borne aloft by players at the moment of ecstatic victory, not a struggling Atlas in sight. 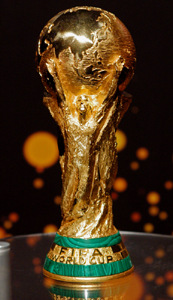 I don't hear any complaints about the 'inaccuracy' of the globe in the statue, maybe because its accuracy is completely beside its purpose. It exists as a symbol of universality, inclusiveness, world domination (football-wise of course), meanings which accompany the image of the globe in statues, monuments and trophies the world over. I think the intended symbolism of this globe has been particularly potent to the 2010 World Cup, despite there being a predictably Latin American - European dominance to the quarter final line-up. Perhaps we may yet witness a huge surprise.

Unfortunately we were unable to include the trophy in the Magnificent Maps exhibition. We asked a certain 11 sportsmen to fetch it for us, but they appear to have returned empty-handed.