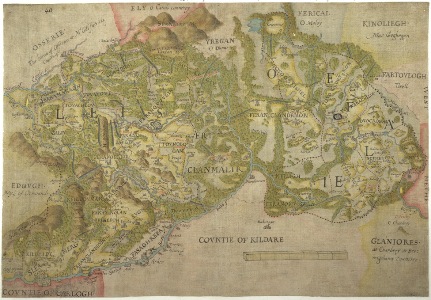 This map of Laois and Offaly in Ireland, painted onto cloth, was made in around 1565. I wasn't keen to include it in the exhibition because I felt it too small and not sufficiently awe-inspiring. But in hindsight (ah wonderful thing) I wish it had been included, since it illustrates an important point about the origin of the word 'map,' which derives from the medieval Latin meaning 'cloth.'

Painted cloths are essentially poor man's tapestries. Anyone can afford to pay somebody to daub some paint on a rag and hang it on a wall, but it takes skill, materials, time and money to weave a tapestry. And so it is unusual, then, that this painted cloth map was probably produced for the decidedly unpauperish English royal family.

It shows the the land immediately to the west of the English-controlled area of Ireland known as the 'Pale,' land which had hitherto been very much beyond it, but which in 1557 had found itself firmly within English sights. This map signifies the first English 'plantation' scheme in Ireland, which involved the confiscating of land from its owners (in this case the O'Moore and O'Connor clans) and settling mainly English soldier-landlords in their place. It shows the land, the woods, the terrain, natural boundaries which would continuously impede the English troops in their helpfully bright red uniforms. It also gives the names of Irish inhabitants, people who knew their land far too well to need the help of maps.

The Map presented the lie of the land favourably for the monarch and chief advisors' eyes. Laois and Offaly have been renamed King's and Queen's counties, the two main forts renamed Maryborough and Philipstown after Queen Mary (reigned 1553-1558) and her husband. Your majesties! It also provided important, secret and presumably quite urgent geographical information for the eyes of the ruling elite. Let's face it, you wouldn't want to wait for the tapestry, you'd settle for the speedily produced tapestry imitation 'painted cloth!', which offered at least a modecum of insulation for the walls of that drafty palace. 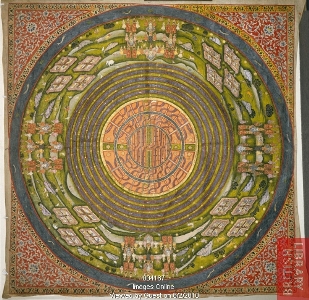 Once the eye has become accustomed to - or recovered from - the intense colour and abstract complexity of this map, its order and symmetry emerges. It shows the world (or worlds) according to Jainism, a religion founded in the 5th-6th century BC in Northern India, and is based on Jainist texts which prescribed precise and detailed measurements for the form of the universe.

The map consists of a series of continents, worlds and universes through which the soul must travel on its way to enlightenment. The land inhabited by humans - Jambudvipa - is the flesh-coloured central area, and names corresponding to India, the Himalayas and the Ganges are present there. Shrines and cities appear in the outer continental areas.

It is tempting to compare Jain maps with the medieval mappaeumundi due to the strong spiritual aspects of both. There are visual similarities too - isn't the Jain map sort-of what a cosmological mappamundi would look like? Yet there are crucial differences, which have as much to do with the maps' purposes as with the historical or philosophical groundings of their respective belief systems. For example, the mappaemundi are not exclusively contemplative, devotional objects like the Jain maps appear to be.

And this was the problem we faced when deciding whether to include this map in the exhibition. We were unable to be sure of the exact context in which Jain maps were looked at. As contemplative objects yes, but this did not necessarily mean that they would have been displayed in temples, but studies or libraries, where they would possibly not have been constantly displayed. Indeed, the survival and good states of preservation of a number of Jain maps suggest that they were not on permanent show. With this ambiguity, we felt it important not to guess or assume.

There are a number of Jain maps in existence, exhibiting remarkable variety, but this late example, painted onto cloth, is the best one I have seen. Precise, symmetrical, and visually incredible.

I've just been informed by Peter Barber that the funeral I identified in the map of Augsburg in my previous post, is in fact not the funeral he was referring to. The real funeral is happening to the top left of the map. Clearly more Inspector Clouseau than Miss Marple, it seems that I have stumbled upon a crime scene after all! Could this be the plot to a sensationalist history novel that makes me my fortune? Better keep this one quiet...