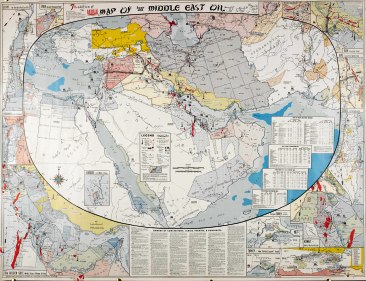 Maps and big business go well together. In the boardroom, as Hollywood confirms, the map is the essential 'prop' assisting the giant corporation on its path towards world domination, acting as a powerful symbol in the most serious money-making spaces.

This map, however, which we excluded from the final selection, deals with the biggest business of modern times: oil.

The 'Map of Near and Middle East Oil' was one of a number of oil maps published from the 1940s onwards in Texas by the American oil trade publication The Oil Forum. It was updated throughout the 1960s to show, for officials and investors, the increasingly complex networks of ownership and influence, concessions, oilfields, refineries and pipelines in the decade prior to the oil boom of the 1970s.

It is a mesmerising mish-mash of tables, statistics, symbols, borders, lines, colours and patterns. Utterly incomprehensible to the lay viewer, and that is exactly the point of the map; it speaks to the initiated in their own language.

The map confuses me for a number of reasons. Its traditional format, the compass rose, the faux-Arabic lettering of the title, not to mention the colloquial labels and in-jokes ('European Turkey- to be or not to be' presumably refers to legislation governing oil drilling in the former Ottoman Empire) appears out-of-context with the map's otherwise humourless tone. I just don't understand it or where it is coming from. However, I'm intrigued by the feeling of distance it establishes between itself and me, even though it is a comparatively recent creation.

I suppose what this tells us is that all maps have their particular audiences, and that our understanding of them has probably more to do with our perceptions of these audiences than the people themselves, their priorities, and for that matter, their maps.

Another great post!
But would it be possible to add a link to a somewhat larger image of the maps featured in this blog?