British Library and British Museum: Who's who?

Whilst the correction of this error is good news, not least for the vehicles transporting the 7 million British Library books for the Google digitisation project, the confusion between Library and Museum persists: 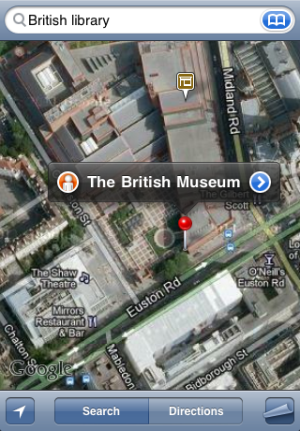 The confusion is understandable: both the British Library and British Museum are vast repositories of stuff, much of it historical and very special. Both have ‘British’ in their name. The two were in fact one and the same institution until 1972, and only became physically separate when the British Library moved a mile up the road to St. Pancras in 1998.

Confusing the Museum and the Library is an error not exclusive to Google, but politicians, prominent TV historians, visitors, even writers of things known as letters. The BM has now stopped forwarding on the BL‘s mail addressed to them by mistake, presumably with the loss of many hundreds of jobs.

Clearly, Google’s mistake is not the sort of co-ordinate error which places a fast food outlet in the middle of Tower Bridge (and for more on such errors see this blog post). The mistake reflects a popular assumption. Maybe it is entirely appropriate that the map should lead one to the wrong place. The map reflects reality. At least, that’ll be my excuse when I’m late for work tomorrow, having followed it to the wrong/right place.