Had he not died, Gerard Mercator would be celebrating his 500th birthday today. 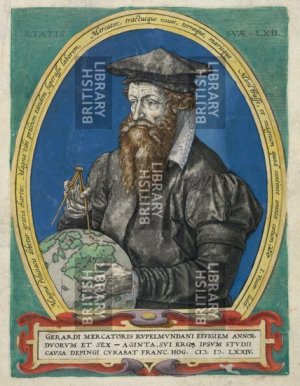 But why should death stand in the way of a birthday celebration for a significant historical figure? Mercator (1512-1594) has enjoyed more than his fair share of posthumous parties – it feels like the clear-up has only just been completed after the one celebrating the 400th anniversary of his map projection (1969, if you can remember).

This way of commemorating/connecting with the past often tells us more about those doing the celebrating than the figures themselves. In fact, one often finds, looking closer, that the personality is nowhere to be seen, obscured by what they and their achievements have come to represent.

Take Mercator. Regarded as the first modern mapmaker, he created (in 1569) a world map upon which navigators, for the first time, could draw a straight line and actually travel along it without the curvature of the earth messing up their co-ordinates.

Big news for those European nations wanting to get across the sea to where all the gold was, as well as those to whom the gold at that time belonged. Yet the subsequent implication of Mercator in the ideology of colonialism and empire probably disguises, even misrepresents, far less political and controversial motivations.

So, in place of the party streamers and jelly and ice-cream, here are ten interesting facts about a 500 year old mapmaker from Belgium which might be true.

2. He wrote the definitive manual on italic writing.

4.  A Protestant in the Catholic Spanish Netherlands, Mercator was arrested and tried as a heretic.

7. Atlas bombed commercially when it was first produced.

8. He never visited England, but produced the biggest and best map of the British Isles in 1564, using inside information from someone whose identity is still shrouded in mystery.

10. The maths of his world map projection is still in use today, most notably by NASA and Ordnance Survey.

… and there’s also a display of Mercator’s maps, atlases and letters in the British Library’s Sir John Ritblat Gallery, until the end of May.