This is more a news update than anything else, to say that some amazing stuff has gone on this week with BL Georeferencer, our online crowdsourcing project for placing historic maps at http://www.bl.uk/maps/

In less than *three* days from the lauch (four from the "soft" launch of social media leaks!), all of the 781 historic maps we put online for georeferencing were completed using the BL Georeferencer tool. Participants captured spatial metadata about the maps so that they may now be seached and viewed using popular geographic web tools, eg Google Earth and Old Maps Online, and data (OSM, OS OpenData).
So before I head off to a training session, I wanted to say "thank you" to the volunteers who gave their time to sort out where all these maps belonged. I know from my familiarity with this collection that finding the places depicted often required plenty of patience, online research and a spatial sense!
-kimberly 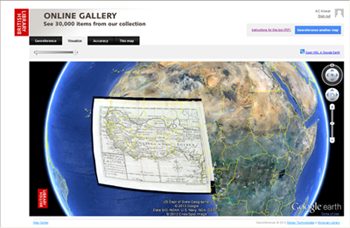 Posted by Kimberly Kowal at 9:43 AM