Around this time of year, Dr Adam Smyth provides me with the theme for the annual Birkbeck College medieval and early modern history summer school.

The British Library's excellent map collection (still relatively unplumbed by students of early modern history) is usually able to yield a few appropriate maps to discuss.  Last year‚Äôs topic In the City wasn‚Äôt too taxing (we've one or two urban maps lying around), and this year too the theme On the River was generous.

Rivers are some of the most prominent features on maps of all ages. In fact in some cases, rivers are the only features. From this we must infer that rivers are important.

A river ‚Äì the River Don ‚Äì forms the division between Europe and Asia in schematic T-in-O world diagram maps from the 7th century: 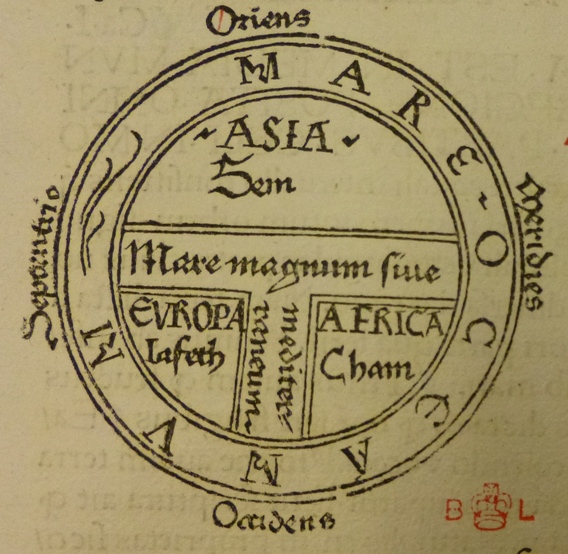 A collection of rivers traditionally run from the Garden of Eden at the top of more embellished medieval world maps: 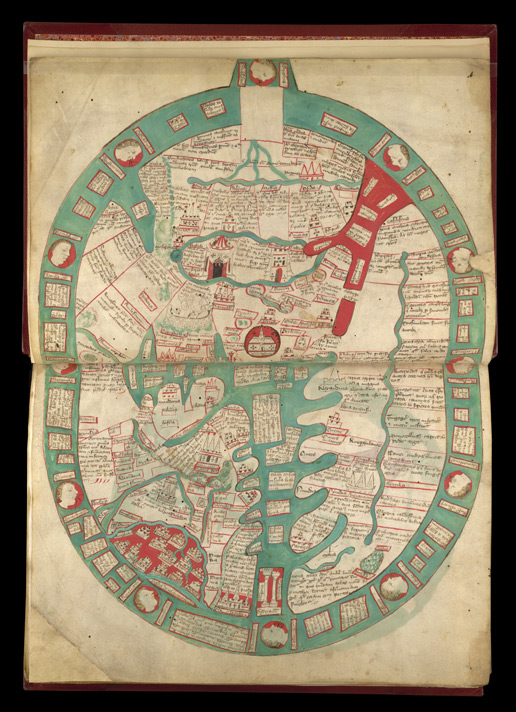 More down-to-earth water descriptions are very rare. This  diagram describes ‚Äì or rather commemorates, the construction of a 3 mile water course transporting water from springs (the circles) in Hertfordshire to Waltham Abbey. In around 1350. 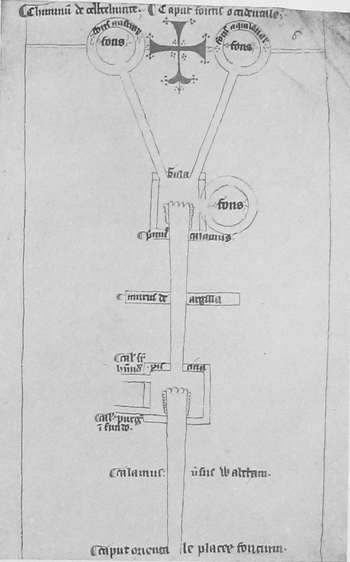 Over the course of the early modern period, as the world gets bigger and maps become a more common method of communicating, rivers seem to become less of a barrier (physical and mental) and more a means to expansion.

The river leading to the vulnerable heart of Britain.This defensive plan for the Thames was compiled under threat of invasion from Spain in 1588:

This map of the River Trent was apparently produced to show that the artificial diversion of the river away from Newark‚Äôs mills (by a certain sneaky Mr Sutton) did not compromise their productivity:

Diplomatic missions to the east (this by the Holstein court in the 1630s) produced fantastical travel accounts:

In Michael Drayton‚Äôs... how can I put it... 'inventive' topographical poem ‚ÄòPoly Olbion,‚Äô the rivers of England and Wales have a singing match. The prize? The Isle of Lundy. Great! 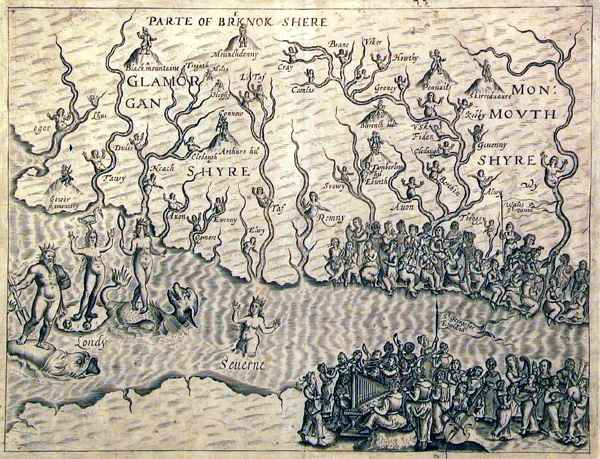 It's all about the rivers, obviously. Lyon, at the confluence of the rivers Sa√¥ne and Rhone, was a powerful mercantile town, financial centre and meeting point from at least the Middle Ages: 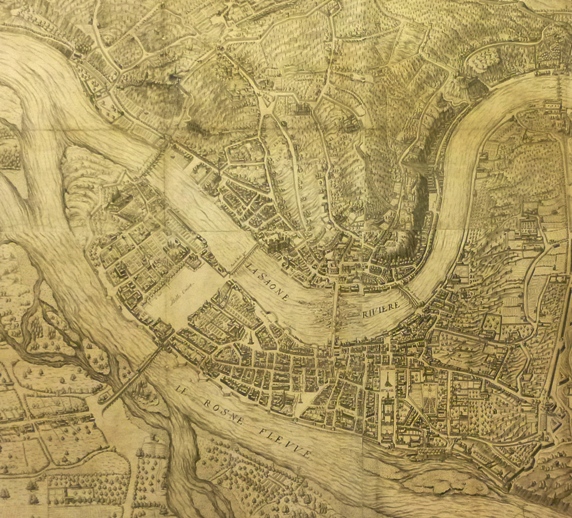 These are all highly vaunted visions of the river, but of course we should remember that most people would have had direct experience of rivers, and wouldn‚Äôt really have needed or used maps of them. Rarely do maps show the view from the river.

But occasionally there's a cheeky glimpse of the sort of everyday experience of the river which comes close enough. How big? 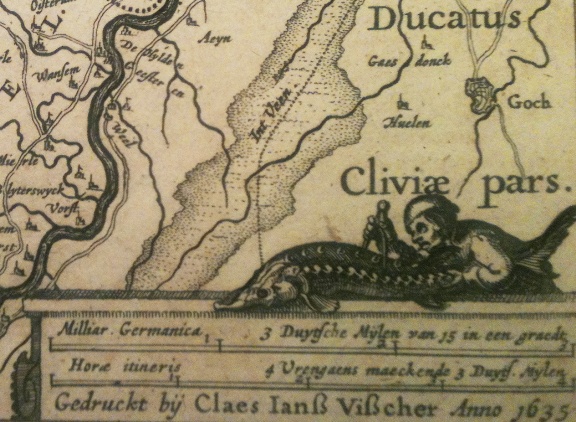 I was thumbing through some old Map Library invoices the other day in order to answer a reader enquiry about the provenance of a map we purchased, back in those heady days of 1891.

The quantity of invoices from the 1890s shows that the Map Library (formed in 1867) was extremely active in purchasing material from the map and book trade. Not just modern, up to date mapping, but historical mapping too, as the invoices show. An Ortelius atlas here (1570), a Hondius atlas there (1638), interspersed among then 'modern‚Äô multi-sheet large scale sheet maps.

It is a really important period, because not only was the discipline of geography then developing into the modern academic university subject we recognise today, but old maps (as opposed to contemporary maps of 'classical geography') were becoming recognised as having value as historical sources. 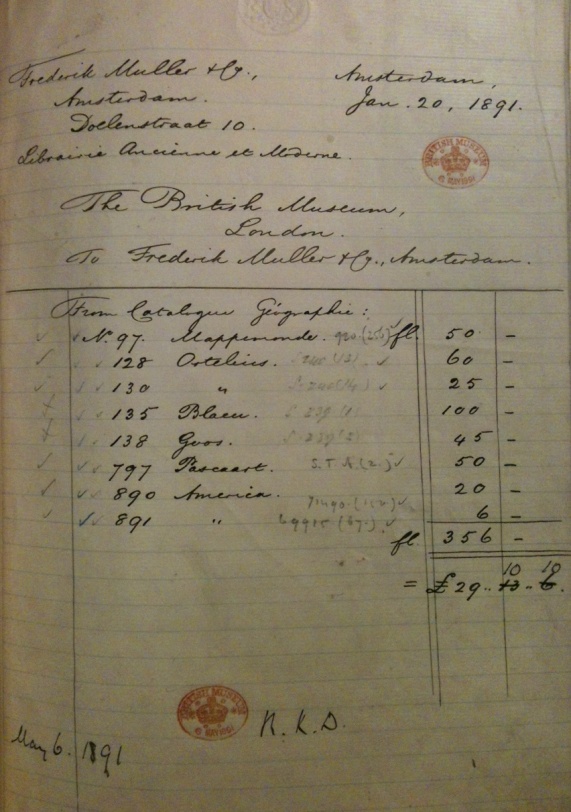 I know the maps on this invoice very well. Dated 20th January, 1891, it lists a number of Dutch 17th century sea charts, including one by Willem Blaeu of 1625, printed onto vellum (Maps S.T.7.), and another map of 1784 which we included in the Magnificent Maps exhibition back in 2010. This is Buell's map of the USA, in fact the first map of the independent USA, and the first produced by somebody from the USA. There are still only seven known copies in the world. 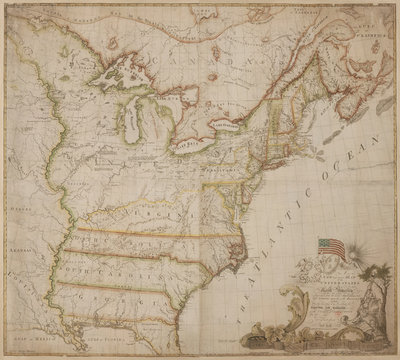 It was purchased from a Dutch dealer called Frederick Muller. Muller was also a scholar, an author, a map enthusiast, and thus an important figure in the development of the history of cartography (see Harley, History of Cartography vol. I , chapter 1,  pp. 15-17). A descendant of Muller's is in the same business today. I saw their stand at the London Antiquarian Book Fair last week, along with a great many other antiquarian and rare book and print sellers. London is traditionally buzzing in June. A week earlier, the London Map Fair had taken place at that most venerable institution the Royal Geographical Society (which, let us not forget, has its own historical and integral collection of maps and views).

You may have heard the organiser of the map fair Tim Bryars, a historian in his own right, speaking about maps on the Today programme and Robert Elms show last week. Also at the fair, head of Cartographic & Topographical Materials our own Peter Barber gave a lecture on the ‚ÄòCartomania of George III,‚Äô describing our fundraising project for the digitisation and full cataloguing of the King‚Äôs Topographical Collection. And as well as the projects, possibilities and enthused map chat, there was even a purchase or two for the national map collection.