January 29th sees the anniversary of the death of King George III in 1820.  While the Georgian contribution to society in a myriad of ways is currently being explored through the marvellous British Library exhibition Georgians Revealed: Life, Style and the Making of Modern Britain (Until 11 March 2014), another project is also underway to catalogue and digitise King George III’s personal collection of maps and views.  More information about the project and how you can contribute is available at http://support.bl.uk/Page/King-George-IIIs-Topographical-Collection

Four cataloguers began the task of recording the treasures of this collection, last catalogued in 1829 with only brief records and lacking much important information, in the latter part of 2013.  Some of their findings so far are recorded here.

Having been tasked with the cataloguing of maps of the Americas and the Spanish Empire from the collection, almost every map examined has revealed something of interest or note, whilst a cursory overview of these regions has revealed a glimpse of the collector and his character.  A few maps in particular have caught my eye thus far:

•    Firstly, and because everyone likes a bit of espionage and subterfuge, I have been struck by the interchangeable role of cartographer and spy.

A fascinating and beautiful manuscript map on vellum, complete with a rather fawning acrostic to James Duke of York, that is signed "J.S. Americanus" – John Scott (1632?-1704) adventurer, spy and, according to his entry in the Dictionary for National Biography, quite the character. 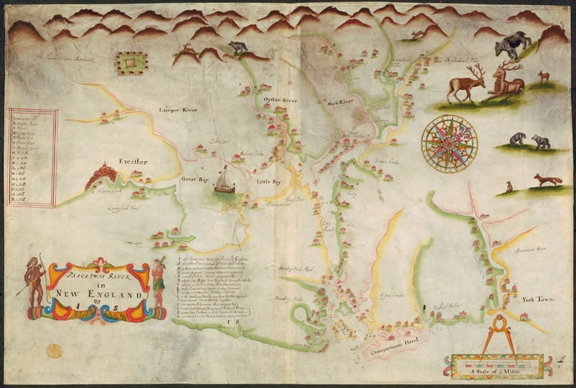 Intended for presentation to Prince George of Denmark and Norway, Duke of Cumberland (and Lord High Admiral), this manuscript map of Placentia in Newfoundland was drawn by Michel de Monsegur who was seemingly lured into the service of Queen Anne by payment. 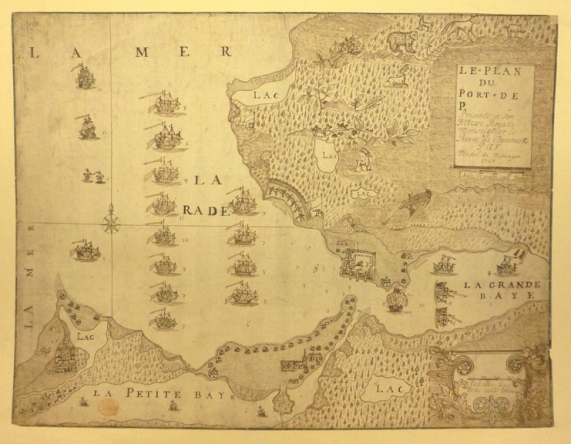 This detailed plan of Quebec was drawn by Patrick Mackellar, a military engineer who had spent time imprisoned in the city by the French before being released on parole to produce a map that would aid the British in their subsequent capture of the city, a pivotal moment during the French and Indian War 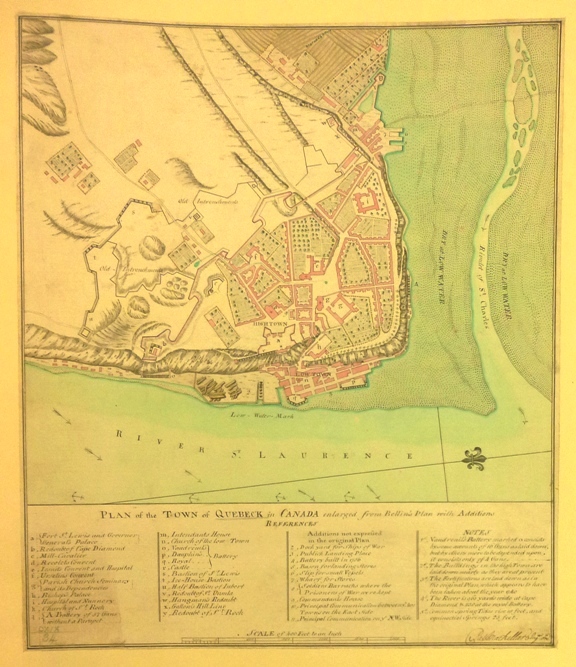 PLAN of the TOWN of QUEBECK in CANADA enlarged from Bellin's Plan with Additions. Maps K.Top 119.34

•    Secondly, the collection has revealed a cartographer seemingly not recorded anywhere else.

Although this map (Maps K.Top.120.5.2 TAB END.) was published in London, Howard Mitchelson is keen to state his previous American residency (and perhaps his knowledge and authority in matters cartographic, by association).  Neither the British Library nor the Library of Congress catalogues list other maps by Mitchelson and his name does not appear in Tooley’s Dictionary of Mapmakers nor in British Map Engravers by Laurence Worms and Ashley Baynton-Williams. 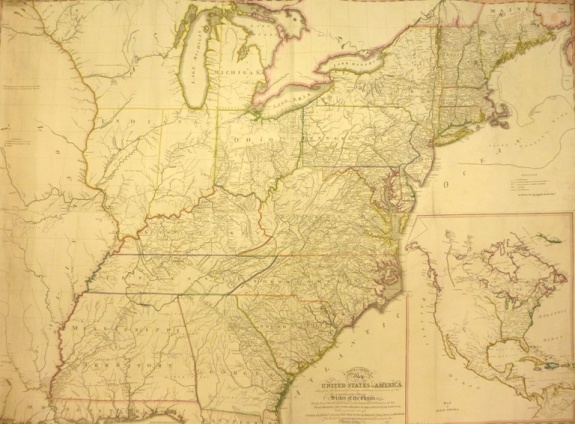 A NEW & CORRECT Map OF THE UNITED STATES OF AMERICA, taken from the latest actual surveys; exhibiting a correct view of the location of the different States of the Union. Of the Post Roads, situations, connexions and Distances of the POST OFFICES, COUNTIES, RIVERS, LAKES, PRINCIPAL TOWNS &c. With a general view of UPPER & LOWER CANADA, NEW BRUNSWICK, NEWFOUNDLAND, & LABRADOR. Published by HOWARD MITCHELSON late Resident in the United States. LONDON, July 14, 1809. Maps K.Top 120.5.2.TAB END 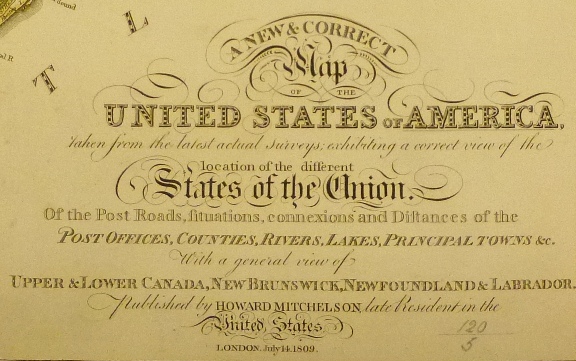 Can anyone else shed any light on this American expat?


•    Thirdly, and this is not just for the carto-bibliophiles amongst us with an eye for detail, some of the printed maps in the collection appear to be previously unrecorded editions or states.  The differences between a copy of a map with text on the back and one from the King’s Topographical Collection with no text, for example, may not seem particularly important, but such detail adds to the “story” and history of the map – when exactly was it printed in this version, in what sequence (was it published first with text or without), by whom was it printed without text and perhaps even for whom was it printed in this “special” format?

This is a well-known and early map of New England that was published in Amsterdam during the so-called “golden age” of Dutch cartography in the early-seventeenth century.  Editions of the map were published in atlases with Latin, French, German, English, Dutch or Spanish text to the back describing the region.  However, this example of the map from the King’s Topographical Collection has no text supporting a theory that perhaps the map was printed and sold separately, in addition to its appearance in well-documented atlases. Moll's map was published in London in the early- eighteenth century.  The copperplate from which this map was printed underwent a series of changes throughout its history.  The example of the map in the King’s Topographical Collection has minor variations in the panel of text at lower right that are not seemingly recorded elsewhere. All very interesting in establishing the sequence in which alterations to the printing plate were made! 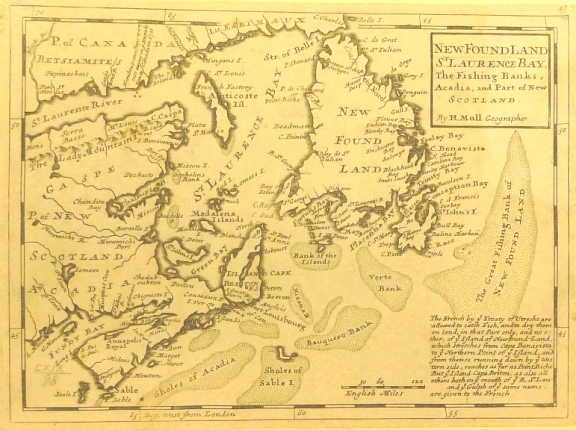 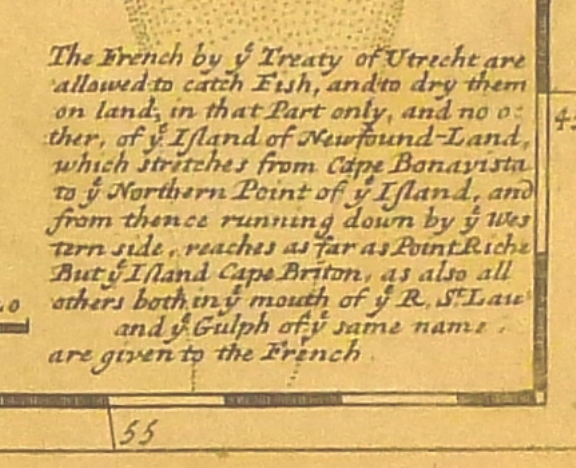 Rogier van der Weyden’s painting of St Luke painting the Virgin  of about 1434 is one of the treasures of the Boston Museum of Fine Arts.  During a recent visit I realized it could also be interpreted as a symbolic medieval world map – with another, more familiar, diagrammatic world map in the painting for good measure! 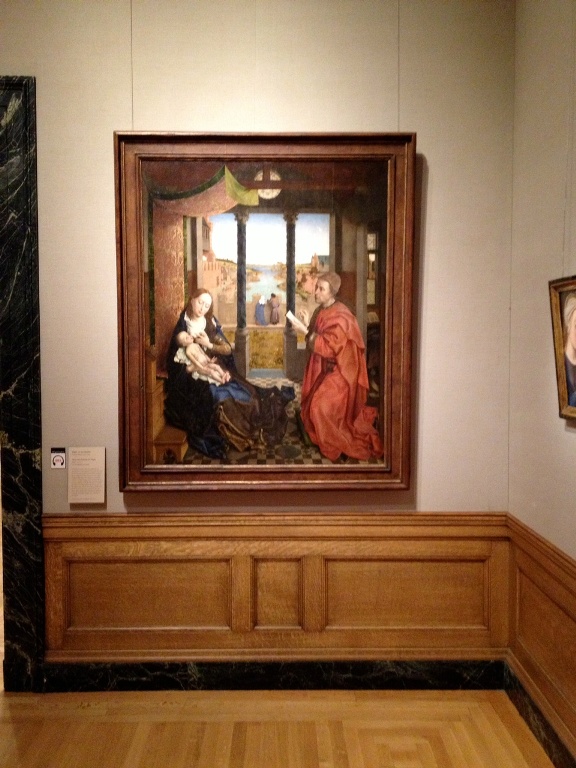 Fifteenth century Flemish artists loved to play visual tricks: Robert Campin, for instance turned a wicker fire screen into a halo for the Virgin in   a painting created at almost exactly the same time  as Rogier’s and now in the National Gallery in London. 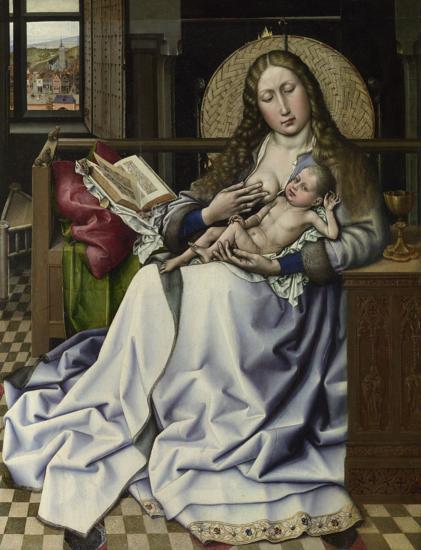 Follower of Robert Campin, the Virgin and Child before a Firescreen, ca. 1444. Oil on panel. © Copyright The National Gallery, London 2014

In Jan van Eyck’s painting of the Chancellor Rollin adoring the Virgin and Child, now in the Louvre, painted shortly before and which served as the model for Rogier van der Weyden, the windows above the main scene are square and, despite, their stained glass, seem not to have any special significance.   When I looked at the Boston painting hanging on the wall in the museum my eye was immediately drawn to the circular window occupying the position of the square windows in the van Eyck.  I would not have noticed it if I had viewed a scan or a conventional reproduction.  Van der Weyden skillfully shows a horizontal and a vertical roof beam intersecting the window and turning it into a reversed TO map, with the vertical beam representing the Mediterranean, the horizontal beam the rivers Don and the Nile, with Africa to the left and Europe to the right of the vertical beam and with Asia occupying the lower half of the circle. 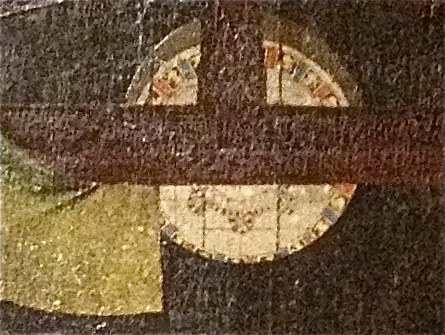 Looking  below the window, one sees that the structure of the painting, despite the exclusively Netherlandish scenes depicted in it,  reflects that of the map.   The river in the middle becomes the Mediterranean with ‘Africa’ to its left and ‘Europe’ to its right – and the scene containing the Virgin is placed – quite correctly – in Asia! 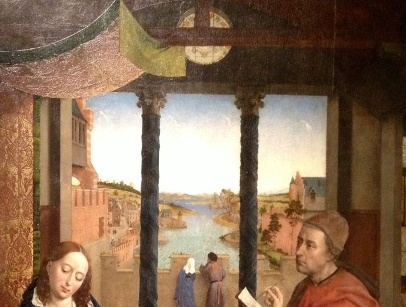 Despite frequent assumptions to the contrary, medieval world maps continued to be very popular in fifteenth century Europe even after the Portuguese voyages from 1420 highlighted their geographical inadequacies.   They are to be seen in Flemish illuminated manuscripts (for instance one of  the British Library’s copies of Jean Corbechon’s Livre des proprietez des choses) ,  in the earliest printed books illustrating texts by Isidore of Seville and other late Roman encyclopedists and are mentioned in later inventories, such as those of the prints owned by Ferdinand Columbus or the goods of Henry VIII.    TO maps continued to play a significant symbolic role in theological and philosophical contexts - as the maps in this painting of Rogier van der Weyden demonstrate. 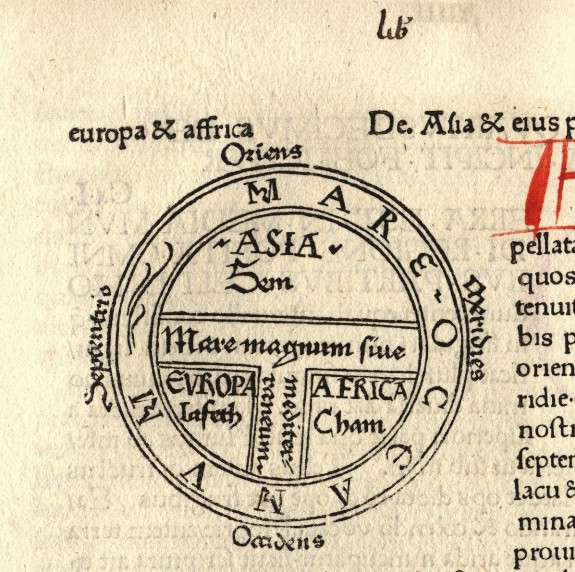 Earlier this week, georeferencing of the Library's collection of first-edition Goad mapping of British and Irish towns was completed!

In just seven weeks, the work of a great many people brought order and place to what was previously simply 2,700 digital image files. The precise location of each scanned map - for the over 50 cities and towns mapped by the Chas. E Goad firm 1886-1930 - is now known. Places small (Goole, covered in just three maps) and  large were included, with the giant of London making up more than 1,000 maps, as shown in below graphic. All maps may be accessed here. 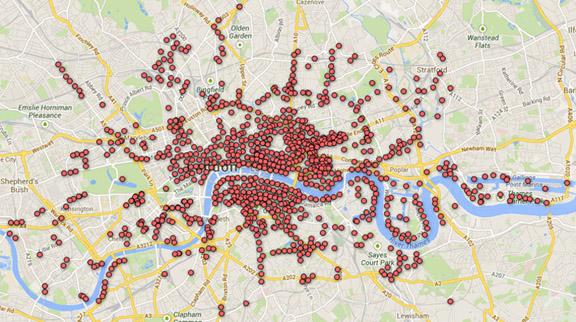 "Thank you" to all the BL Georeferencer participants, and in particular to two volunteers who, since the release of 20 November, have contributed an outstanding amount of time and effort. Dr Susan Major added over 10,000 control points to the Goad maps, and in addition played an active role in offering feedback and suggestions. Maurice Nicholson, a past Top Contributor, submitted the most points for the military maps, and his contributions to Goad were second only to Susan.

What's next? We have a team of volunteer reviewers - dedicated participants invited to review for their skill and expertise - to quality-check submitted metadata. Maps requiring further work will be released back to the crowd, so expect to see maps become available over the next few weeks and months. Check back at http://www.bl.uk/maps/

Posted by Kimberly Kowal at 2:58 PM