A new British Library collaboration called the Virtual Mappa project is well under way, using digital images of a selection of medieval world maps - mappaemundi - and some excellent new annotation software (more on that at a later date). High-resolution images of these maps will be available online for public use, with transcribed and translated text, notes, links to outside resources and other tools for understanding these marvellous mappaemundi. I'm the intern charged with annotating the maps and organising all this extra data. I've been up to my ears in Latin text, incredible images and software glitches for a few months now, so it is about time we started spreading the news about the upcoming Virtual Mappa project. 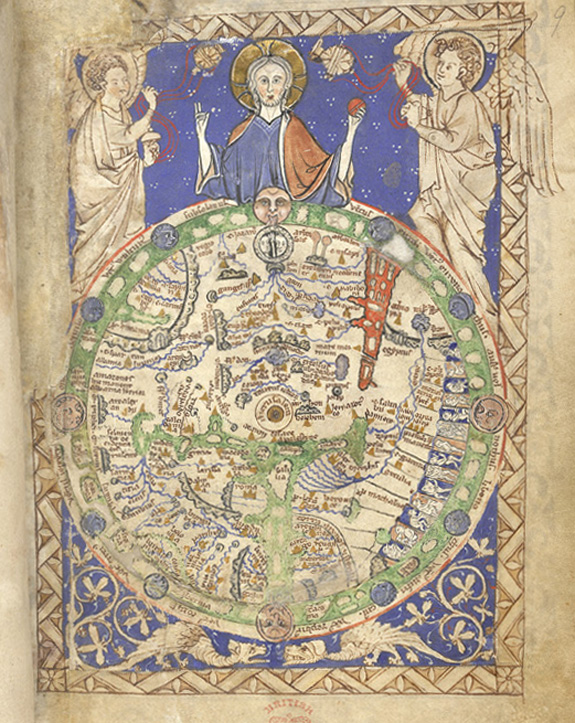 At first glance, you may not be able to recognise a medieval mappamundi as depicting the same earth we see in maps today, so some basics need addressing. Generally speaking, medieval world maps only show the continents of Europe, Asia and Africa, seen somewhat as synonymous with the Roman Empire. Australasia, the Americas and the polar regions don't tend to feature, as they were either unknown or considered to be uninhabited, or populated by 'savages', and therefore of little interest to the 'civilised' Christian populace creating and viewing these documents. And contrary to popular opinion, these maps don't depict a flat earth - it had already been known for centuries that the earth was a globe, and these maps simply attempt to model this spherical shape on the flat surface of a page, similar to the way a modern world map bends and stretches the continents to fit an image of the earth's surface into a neat rectangle. 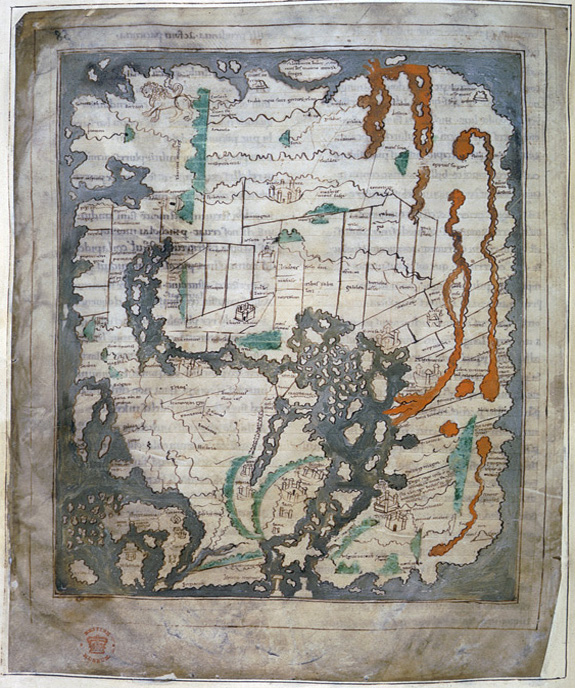 It must also be noted that even though we call these documents 'maps', they contain a greater range of information than what we are used to with modern maps. Medieval mappaemundi were often more like encyclopedias in geographic form, containing a significant amount of history - especially events from the Bible - and even zoological and ethnographic information. Sometimes the whole of known history from Creation to the End of the World is depicted; monstrous races and mythical creatures abound on the more extravagant maps; and complex Christian connections and levels of meaning which we may never get close to decrypting flow through the map images and text. The nine medieval maps we have been working with so far come from a timeframe covering several centuries, but have certain common characteristics: firstly, they're all world maps depicting a similar area of the globe (as discussed above). Secondly, they are orientated with East at the top, where modern maps have North at the top. This was standard practice for centuries, and when you learn that 'Oriens' means 'East' in Latin, it is easy to see where we get the English word 'orientation'. Finally, each of these maps was made in Britain, so unsurprisingly each one depicts the British Isles and Ireland, although the varying styles means Britain can look very different in each image. 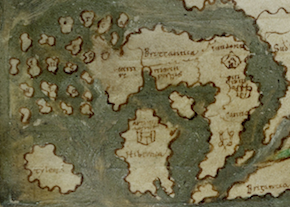 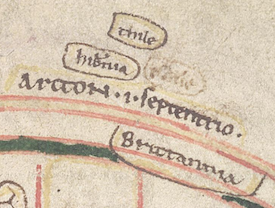 There are some similarities shared between these medieval maps, beyond the basics we've mentioned. Some of the maps clearly go together, for example the Peterborough (above) and Thorney (St John's Oxford MS 17, f. 6r) diagrammatic maps are effectively copies of each other. The two 'Higden Maps' (CCCC MS 21, f.9r and Royal MS 14 C IX, ff.1v-2, below) have the same colour scheme of turquoise and red, and probably both illustrated copies of Ranulf Higden's Polychronicon. Also, Sawley (CCCC MS 66, p.2) and the Hereford Mappa Mundi have some very similar elements which suggest they were both copied from a common ancestor. But there are far more differences that stand out... 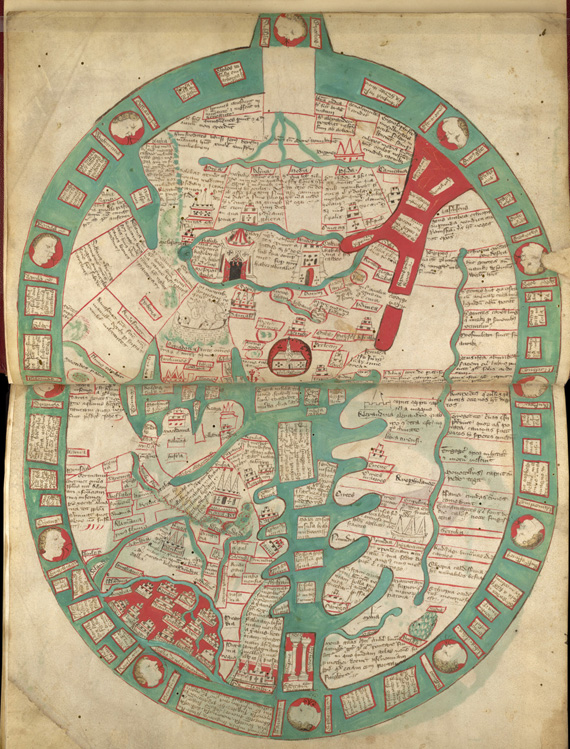 The size of these maps varies enormously, for example the Psalter map is a miniscule 10cm square whereas the Hereford map stands at over 5 feet high. From this we know that one was a personal image for private viewing, and the other designed to be displayed and seen by a large audience. Style differs drastically, from the seemingly accurate 'wiggly' coastlines of the Anglo-Saxon map to the stark diagrammatic outlines of Peterborough. Even between similar sized maps, content can differ - the simpler Higden map shows placenames only, whereas Sawley fits in lots of biblical and ethnographic information in between its cities, rivers and mountains. 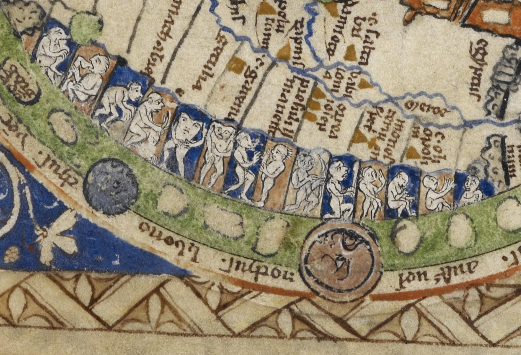 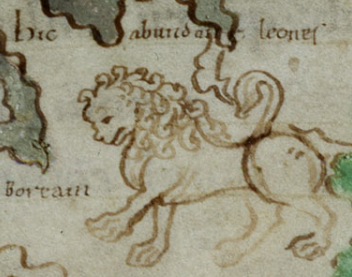 The selected mappaemundi, then, vary greatly in size, style, content and purpose, can contain levels of meaning wholly lost on modern readers, and are written in the dead language of Latin. Good job that the Virtual Mappa Project will help us to make sense of them all! There really is much more to say about these magnificent medieval maps, so check back here for further images, updates and information.

Posted by Kimberly Kowal at 4:20 PM