Messing about with mappaemundi: The Virtual Mappa Project tools (2)

Welcome back to the Virtual Mappa Project blog, now on our third excursion. Last time, we looked at DM annotation tools embedded within the project's website, which enable us to add text transcriptions and translations to the current corpus of mappaemundi. In future it will allow users to make their own notes on these medieval maps, tied directly to the images. Now we will try to explain how a couple of "linking" functions can create complex connections and pathways between texts and images within the project workspace, and out into the wider Web.

So last week's "lesson" in making markers and text annotations is obviously a form of linking itself, but that's just a starting point for a whole world of linked data. From that first image-to-text connection we can begin to branch out, using the text annotations as a jumping-off point. Any piece of text within an annotation can be highlighted with the "Tag" tool, and connected to any other image marker or piece of text. As with the original annotations, pop-up boxes and integrated image thumbnails show where the connections lead. 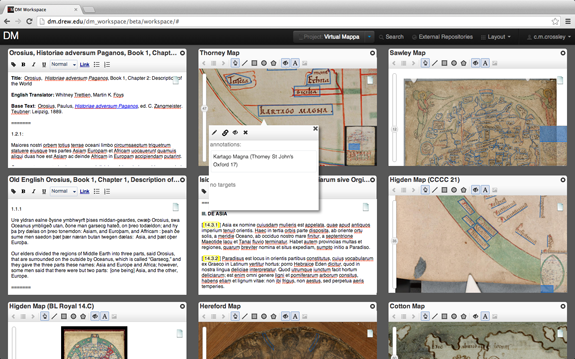 A bustling DM workspace with a variety of map images and text documents. Reproduced by permission of the British Library; The Mappa Mundi Trust and the Dean and Chapter of Hereford Cathedral; and The Master and Fellows of Corpus Christi College, Cambridge.

As well as the mappaemundi annotations we have mentioned, we have text documents stored alongside the map images. Currently these include relevant parts of Isidore's Etymologies and Orosius's Seven Histories Against the Pagans - in Latin and Old English -  and we plan to add others. Because much of the content on these mappaemundi is derived from these sorts of classical texts - often without citation - it is incredibly useful to be able to link instances from the map images to their specific sources. Mappaemundi, in modern terms, could be considered as "map mashups", plugging an encyclopedic variety of classical and medieval knowledge into a map framework, to create a new and unique image of the world. They're great to view as a finished product, but the identification of the parts which make up the whole can shed light on the creation process, the worldview of the creator and even the audience he was aiming at. But I definitely don't need to point this out to any medievalists reading! 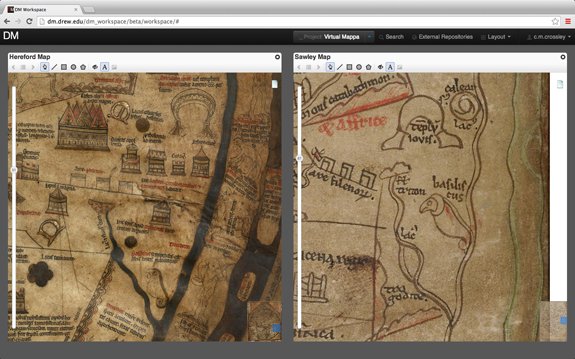 Spot the difference, with the Hereford (L) and Sawley (R) mappaemundi, two sections just waiting for connections to be made. Reproduced by permission of the Mappa Mundi Trust and the Dean and Chapter of Hereford Cathedral; the Sawley map is reproduced by permission of the Master and Fellows of Corpus Christi College, Cambridge. This manuscript - MS66, p.2 - the Higden map of MS21, f.9 r (top and below) and many others are available to view online, thanks to the Parker Library on the Web.

Enough about text already. There are some amongst us who don't care for letters, and there is plenty of purely pictorial information on these mappaemundi to keep everyone looking for a long time. The connections described above can also be made directly between image markers, either within the same image or between different map canvases. There are plenty of elements which crop up on a number of the maps in a visually distinct and recognisable form, such as the almost invariably red-coloured, two-pronged Red Sea and Persian Gulf (below), and it is possible to jump directly between the instances on the images without troubling any text. 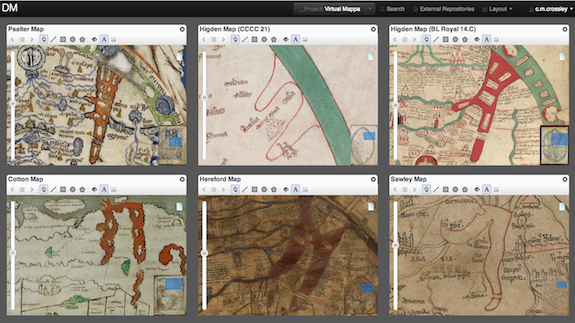 This function is also useful for associated elements spread widely across one image, such as the tragicomically confused continent labels on the Hereford mappamundi, or instances like the word 'Paludes' written split across three separate bodies of connected water (below). 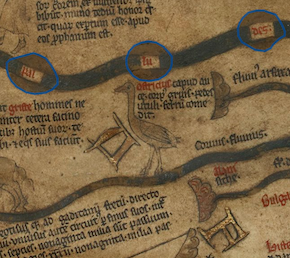 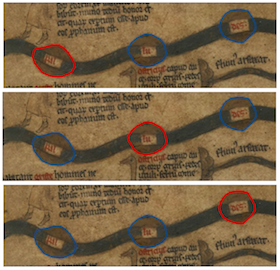 The Hereford map's 'Paludes' (modern-day Sea of Azov) in three pieces, above the sadly now extinct Ukrainian Ostrich (left). Image markers on the same canvas can be linked directly  to one another, temporarily glowing red when a connection is made (right). Reproduced by permission of The Mappa Mundi Trust and the Dean and Chapter of Hereford Cathedral.

Everything described so far in terms of data connections takes place within the framework of the Virtual Mappa Project website, but another simple function can create a near-infinite scope of the linked data. Basically, you can quickly and easily place hyperlinks to external websites within the text annotations. Obviously, a hyperlink can connect to just about anything online: articles, images, gazetteers - I don't need to list the contents of the Web! The Virtual Mappa Project framework still contains the notes, connections and structure you need to engage dynamically with the available mappaemundi in an organised (if rather unique) fashion, but the simple inclusion of a hyperlink tool opens up the annotation content to a whole world of extra information. 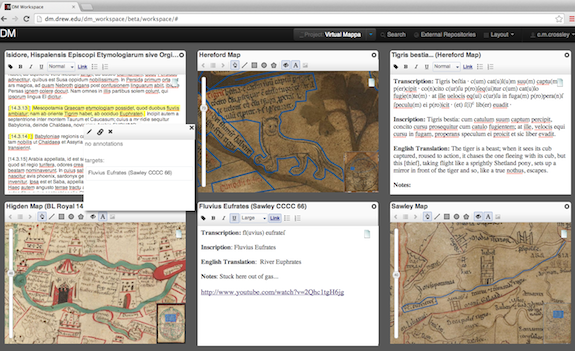 A selection of texts, images and links in the DM workspace: Babylon, between the Tigris and Euphrates. Reproduced by permission of the British Library, the Hereford Mappa Mundi Trust and the Dean and Chapter of Hereford Cathedral, and not forgetting the Master and Fellows of Corpus Christi College, Cambridge.

It is a little tricky to describe and explain the processes and outputs of this type of linked data in a clear, linear fashion, as the process and end result of this form of data creation is anything but linear. But hopefully we have given a sense of the scope and structure potentially provided by the Virtual Mappa Project in allowing us to analyse and engage with these fantastic mappaemundi in a flexible, personal and wide-ranging fashion. I personally haven't really begun to get stuck in to the processes of linked data creation for these documents, but I am definitely looking forward to getting lost in the links between the medieval maps, classical texts and all the other documents and sources that helped to create them, and will help us to better understand them.

Posted by Kimberly Kowal at 4:52 PM