From the largest to the smallest

Sarah Noble, an intern in the British Library's conservation department, was recently given the unusual  task of preparing the world's smallest atlas for display. Here she explains how she did it. 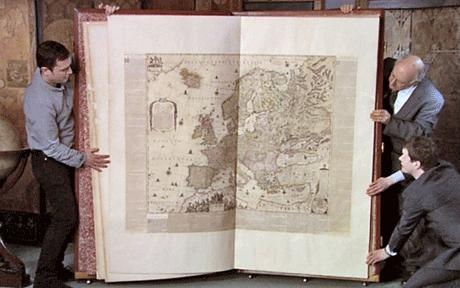 Recently the Klencke Atlas went on loan and will be not be back until autumn 2014. So in its place it was decided to temporarily display ‘The Atlas of the British Empire’, the world’s smallest Atlas.

The Atlas of the British Empire, published by E. Stanford Ltd is 5 x 4 cm and a replica of the original made for the library of Queen Mary’s Dolls' House, a toy model one and a half meters high, given as a gift from the British people to the Queen in 1926.

When the decision was made to put the tiny atlas on display the idea was to use the same space as the largest atlas as a way to best emphasise the difference in scale between these two bound volumes. To achieve this ‘The Atlas of the British Empire’ was sent to the British Library Conservation Centre so that a suitable mount could be designed.

Inspection revealed a trio of issues that would have to be considered before the object went on display.  First of all, many of the pages of the atlas had over time become loose. Secondly, the item is a 3-dimensional object so a mount had to be designed that would enhance its form. And finally a form of attachment had to be designed that would allow the atlas to be displayed flat against the back wall of the display case whilst ensuring that the object would remain secure and stable during the entire display time.

I made sure that all of the pages were in their correct order and aligned neatly and safely within its full leather binding, making sure that none of the loose pages were extending beyond the edges of the binding. Then the style of mount was decided upon. A window mount with large margins and a deep set aperture was chosen. This was designed especially to accentuate the small scale of the bound volume and the depth of the item. 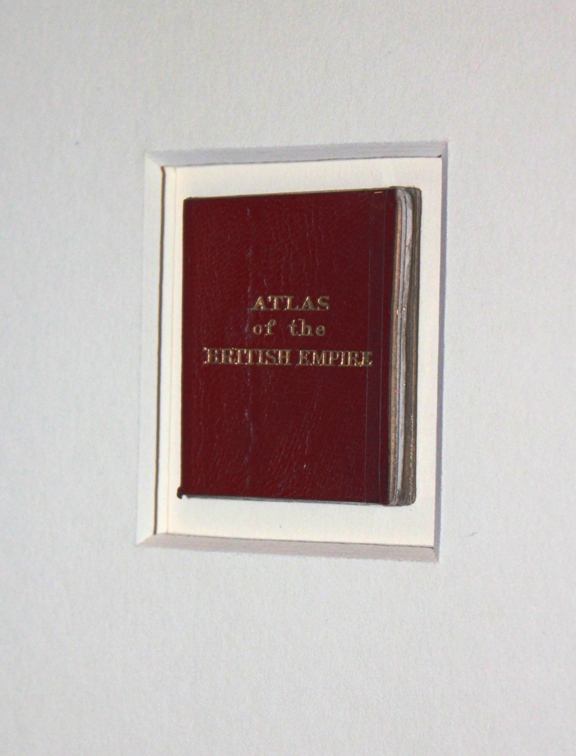 The last task was to design a fixing method that would secure the atlas to the mount board, whilst keeping the loose pages in place and not obscuring any part of the tiny atlas from view. So a very thin strip of polyester was placed along the length of the open side and attached at the rear of the mount board. This attachment was chosen as the ideal method as it allowed the item to remain securely fixed in place whilst the transparent nature of the material removed any problems around obscuring the item.

The Atlas of the British Empire can be found on display in the entrance lobby to the Maps reading room at The British Library until autumn 2014.