George, Jacobites, Scotland and the K.Top – A Brief Summary

The cataloguing and digitisation of the King’s Topographical Collection, George III’s personal collection of maps and views, continues apace at the British Library with many exciting discoveries along the way.  Catalogue records are being expanded and improved, and digitisation will allow images to appear against the catalogue records for all to see at Explore the British Library.

The recent focus on those volumes from the K.Top devoted to Scotland has highlighted an exciting and eclectic mix of material.  There are 17th- and 18th-century maps of the kingdom as a whole published by some of the major European cartographers; there are detailed maps of General George Wade’s military roads; there are manuscript maps and plans of fortified locations produced by the Board of Ordnance in response to the Jacobite threat to Hanoverian rule; there is General William Roy’s seminal Military Survey of Scotland, one of the British Library’s great cartographic treasures and the exemplification of military surveying of the period that would influence and impact on the Ordnance Survey to follow; there are large-scale county maps on multiple sheets; there are detailed town and city plans including 19th-century proposals and projections, some never realised, for Edinburgh; all amongst many other items.  In fact, there are nearly 800 maps and views of Scotland in total.

While Roy’s military survey from the collection is already well-documented and researched (a previous, joint British Library and National Library of Scotland project presents digital images of the “fair copy” of the map online at http://maps.nls.uk/roy/index.html, along with background information and a bibliography), this is perhaps an exception within the collection.  The K.Top project has revealed new information about some of the other maps and has added detail to many catalogue records. A few highlights are recorded here.

The River Forth above Stirling and the Jacobites Maps K.Top.48.77.a. and Maps K.Top.48.77.b. were previously titled A Map of the River Forth from Loch Ard to Stirling: with a MS. account of the Fords and Another Copy of ditto, with a printed account of the Fords in the “Catalogue of Maps, Prints, Drawings, etc., forming the geographical and topographical collection attached to the Library of his late Majesty King George the third, etc.” [London: Printed by order of the Trustees of the British Museum, 1829], and were similarly transcribed into the British Library’s online catalogue. However, these brief titles did not reveal the significance of the two maps and some of the differences between them. 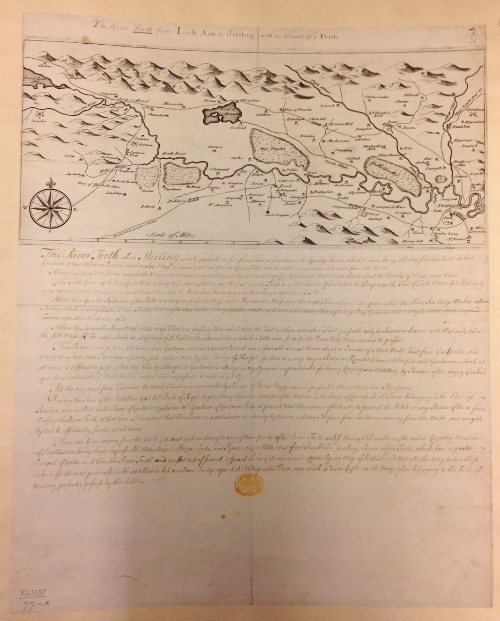 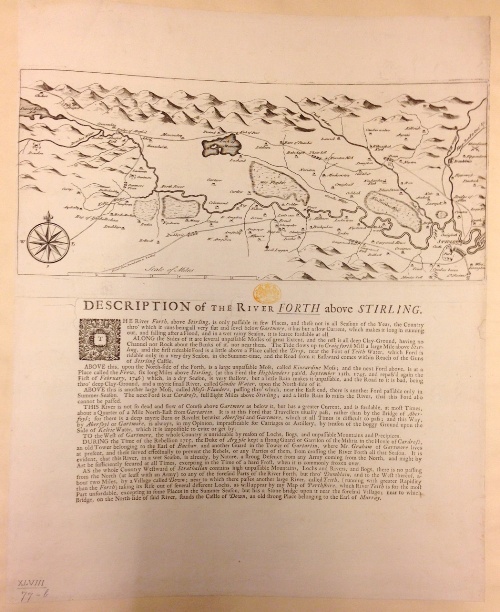 Although the attribution of the map to William Edgar is documented in D. G. Moir’s “The Early Maps of Scotland” (Volume II, page 15), along with the date “(1746?)”, Moir records only three examples of the map (in the Bodleian Library, Glasgow University Library and the British Museum) and he does not refer to any examples with manuscript text.  Comparison of the two K.Top maps side by side reveals differences between the manuscript and printed text.  The manuscript text ends “... an old strong place belonging to the Earl of Murray, presently possest by the Rebels”. 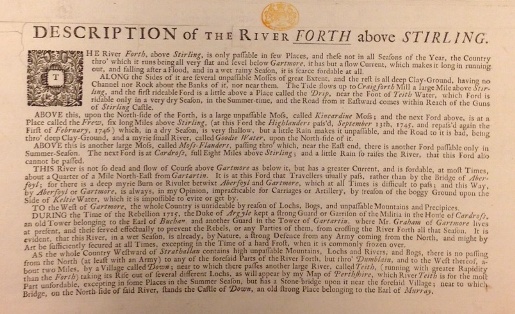 Chris Fleet also commented upon the National Library of Scotland’s MS. 17528, f.142, again within the Milton papers – another example (not mentioned in Moir) of the engraved map “with the text in a very neat manuscript pen. The text looked identical to the printed letterpress text, and ended an old Strong place belonging to the Earl of Murray". Chris hypothesises that this map and manuscript text, if supposed to be a draft for the printed map and text, could suggest Lord Milton may have been responsible for the wider dissemination of the map in 1746.  Certainly a subject for further investigation.

Provenance Cataloguing the collection has included recording verso markings and annotations that may offer clues as to the provenance of maps and views prior to their belonging to George III.  Whilst Maps K.Top.49.23.b. is interesting in its own right as a drawing by Thomas Sandby, PROSPECT of the CASTLE GLAMIS the SEAT of the EARLE of Strathmore in the SHIRE of ANGUS NORTH BRITAIN. Thos. Sandby delin., its verso also exhibits one of the clearest examples of provenance within the entire collection.  Displayed on the verso is the Duke of Cumberland’s cipher; the initials “WA” (for William Augustus) sit boldly above the volume and identification number from Cumberland’s collection - all contained within a simple, circular surround. 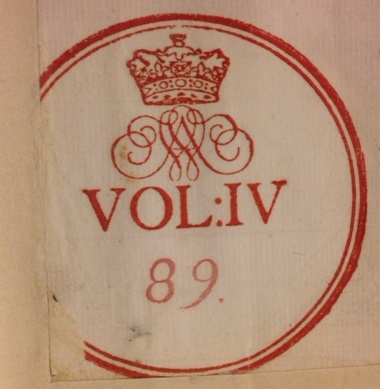 Both Peter Barber in George III and his collection published in “The wisdom of George the Third: papers from a symposium at the Queen's gallery, Buckingham Palace June 2004”, edited with an introduction by Jonathan Marsden (London: Royal Collection, 2005.) and Yolande Hodson in 'Prince William, Royal Map Collector' in The Map Collector, Issue number 44, Autumn 1988 (Tring: Map Collector Publications, 1988) examine provenance in further detail.

A further consideration? Peter Barber, Head of Cartographic and Topographic Materials at the British Library, suggests that one might consider the William Edgar maps detailed above (Maps K.Top.48.77.a. and Maps K.Top.48.77.b.) in conjunction with a possible Duke of Cumberland provenance.  Although the Edgar maps do not display a Duke of Cumberland cipher, one could speculate (and it is only speculation) that the Duke received the example of the Edgar map with manuscript text from Lord Milton directly – perhaps Lord Milton was seeking government or official approval from the Duke of Cumberland? This would seem a more likely possibility than George III (or his agents at auction) acquiring the map with manuscript text directly some years later when its topicality would be somewhat diluted and, in any case, the final, printed version would have been in existence. 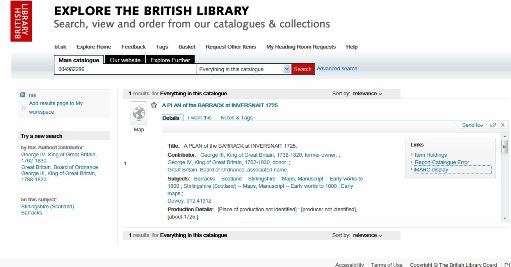 Each record relating to the Board of Ordnance also has a citation from Anderson’s index, further linking them and their production origins, and enabling future comparison and research amongst those maps both within the K.Top and with other Board of Ordnance plans held by the National Library of Scotland and elsewhere.

Cataloguing and digitisation continue, as too does fundraising, for this wonderful project and further details may be found here.